Animals aren’t actors, spectacles to imprison and gawk at, or circus clowns. Yet thousands of elephants, bears, apes, and others are forced to perform silly, difficult tricks under the threat of physical punishment; carted across the country in cramped, stuffy semi-truck trailers; kept chained or caged in barren, filthy enclosures; and regularly separated from their families and friends—all for the sake of entertainment. Many of them are even forced to perform until the day they die. 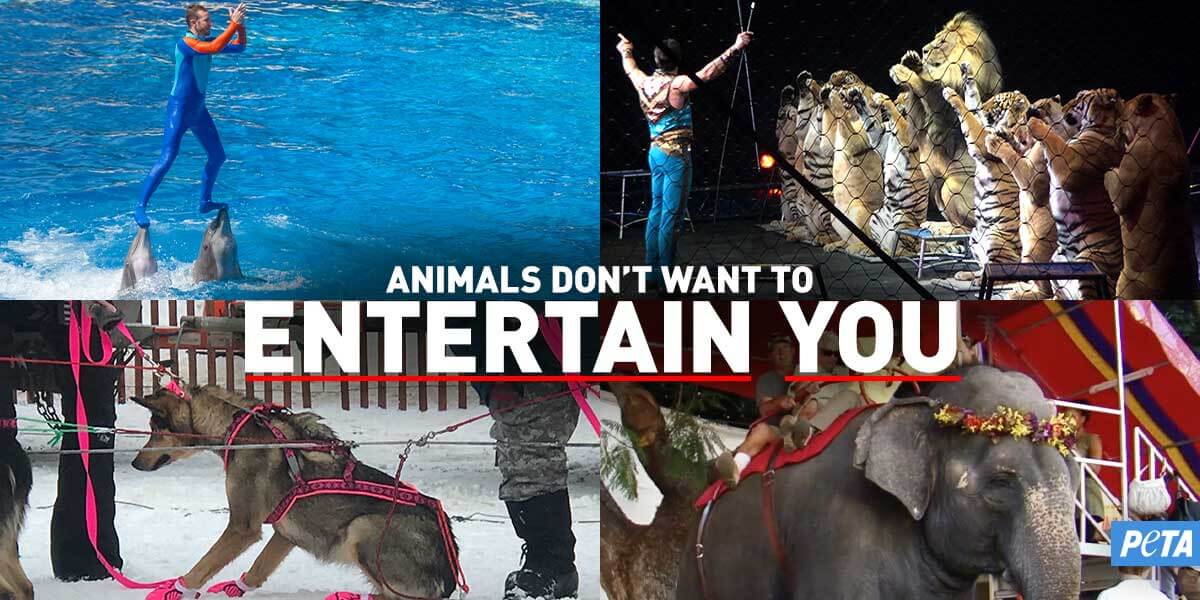 PETA is determined to get animals out of the entertainment business. Our dedicated staff members work full time exposing and ending animal abuse in the entertainment industry, and their work is paying off: Consider the demise of Ringling Bros. circus, for example. In addition to ending circus cruelty, these staff members work with officials to overhaul horseracing rules nationwide, spearhead hard-hitting undercover investigations and public campaigns that are crucial in turning public opinion against animal-exploiting attractions, persuade travel companies to stop selling tickets to SeaWorld and other cruel operations, persuade companies like Coca-Cola to stop sponsoring abusive forms of entertainment such as the deadly Iditarod, persuade entertainment executives not to use animals in movies or TV and to use motion-capture technology instead, chip away at abusive animal exhibitors like the Mobile Zoo, and facilitate the transfer of neglected animals from roadside zoos, traveling menageries, and other seedy facilities to reputable sanctuaries.

What’s Wrong With Circuses? And Is SeaWorld Really That Bad?

Animals don’t like to put on shows—they’re used and abused for the sake of human entertainment. To force bears, elephants, tigers, and others in circuses to perform confusing and physically demanding tricks, trainers use bullhooks, whips, tight collars, muzzles, electric prods, and other painful tools of the trade. Frustrated by years of beatings and confinement, many of them snap—countless animals, trainers, and members of the public have been injured and even killed.

Animals held captive at marine parks or in aquariums don’t fare much better. In captivity, orcas and other dolphins swim in endless circles in tanks that, to them, are the equivalent of bathtubs, and they’re denied the opportunity to engage in almost any natural behavior. Instead, some are forced to perform meaningless tricks. Most die far short of their natural life expectancy.

The dead bodies of tigers at pseudo-sanctuaries, bears confined to cages and pits, and bulls forced to buck and fight are stacking up, too.

There’s only one acceptable thing to do with animals exploited for entertainment: Retire them to reputable sanctuaries or loving homes.

PETA has helped facilitate such transfers, as in the case of Nosey the elephant—we campaigned for her freedom from the circus for years, and now she’s loving her sanctuary home in Tennessee. Charlie, a Thoroughbred horse on the brink of a fatal breakdown, was also rescued by PETA—he now spends his days grazing on grass in a large pasture with his guardian, a longtime PETA supporter and friend. And then there was Tregembo Animal Park in North Carolina, which two local animal advocates represented by PETA’s lawyers successfully sued, allowing us to transfer bears Ben and Bogey to a sprawling Colorado sanctuary. Between 2013 and 2018, PETA saved more than 70 bears from cramped pens and concrete hells, helping to transfer them to true sanctuaries where they can finally play, climb, have friends, and raise their families. Some of our rescues have even helped shut down roadside zoos.

How You Can Help Animals Forced to Perform or Fight

These life-changing victories wouldn’t be possible without the help of our members and supporters. Each of us can help prevent suffering and deaths by refusing to buy a ticket to watch broken animals languish in captivity or perform stupid tricks, demanding that government agencies like the U.S. Department of Agriculture do their jobs, and urging companies not to do business with animal-exploiting operations.

With the help of our members and supporters, PETA works globally to expose and end the use of animals in entertainment. Some of our efforts include the following:

This multifaceted approach yields scores of victories for animals imprisoned and used by the entertainment industry around the world. 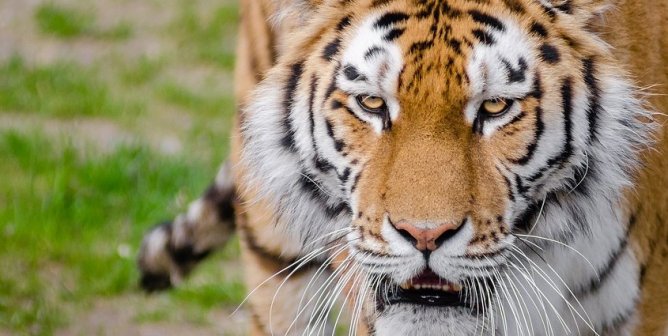 PETA has a whale of a question for you: What do you know about whales? Check out our list of surprising whale facts and test your aquatic mammal knowledge! 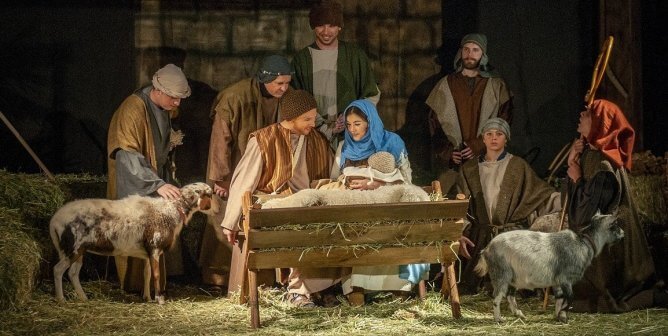 Human actors in live nativities are willing participants, but animals used in the scenes are not. 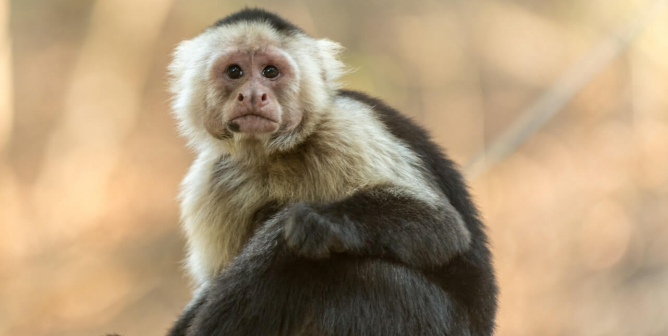 Animals in Movies and on Television: Cruelty Behind the Scenes

We’ve seen it at circuses and marine parks, at roadside zoos and racetracks: When animals are used for entertainment, they suffer—and the film and TV industries are no exception. Often torn away from their mothers as infants and subjected to lives of punishment and deprivation, animals used in movie and television productions have no control… Read more » 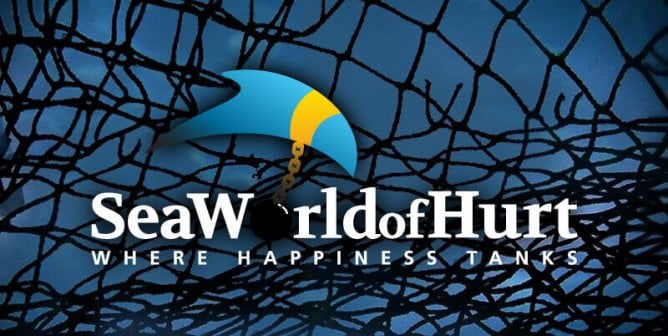 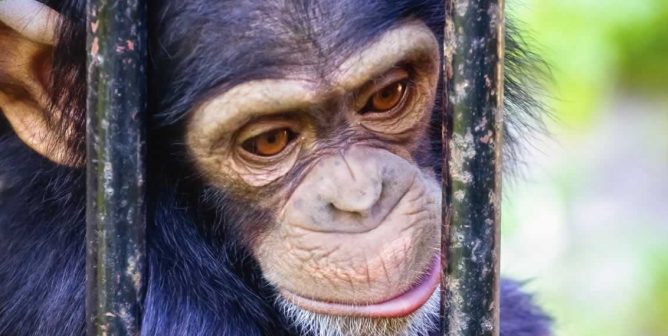 Animals in Film and Television

Highly intelligent, sensitive animals deserve better than to be treated as if they were props for our amusement. Learn how you can help stop the abuse. 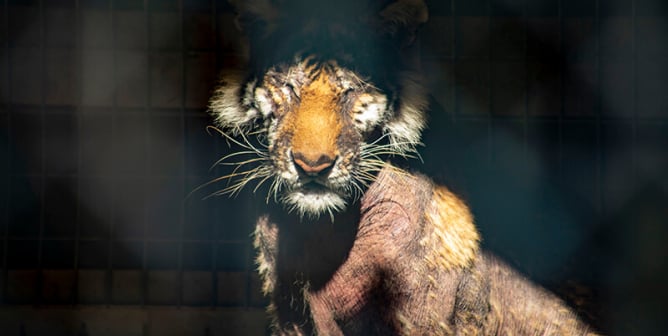 If you care about animals, avoid roadside zoos like you would avoid poison ivy. 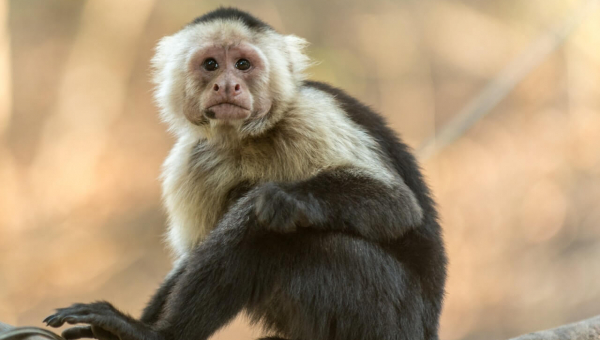 We’ve seen it at circuses and marine parks, at roadside zoos and racetracks: When animals are used for entertainment, they suffer—and the film and TV industries are no exception. Often torn away from their mothers as infants and subjected to lives of punishment and deprivation, animals used in movie and television productions have no control... Read more » 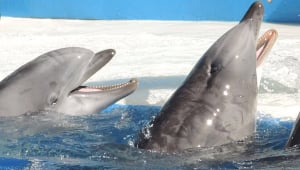 Aquariums and Marine Parks are no safe havens for marine mammals like dolphins and whales. Learn more on how you can help animals and not support these facilities. 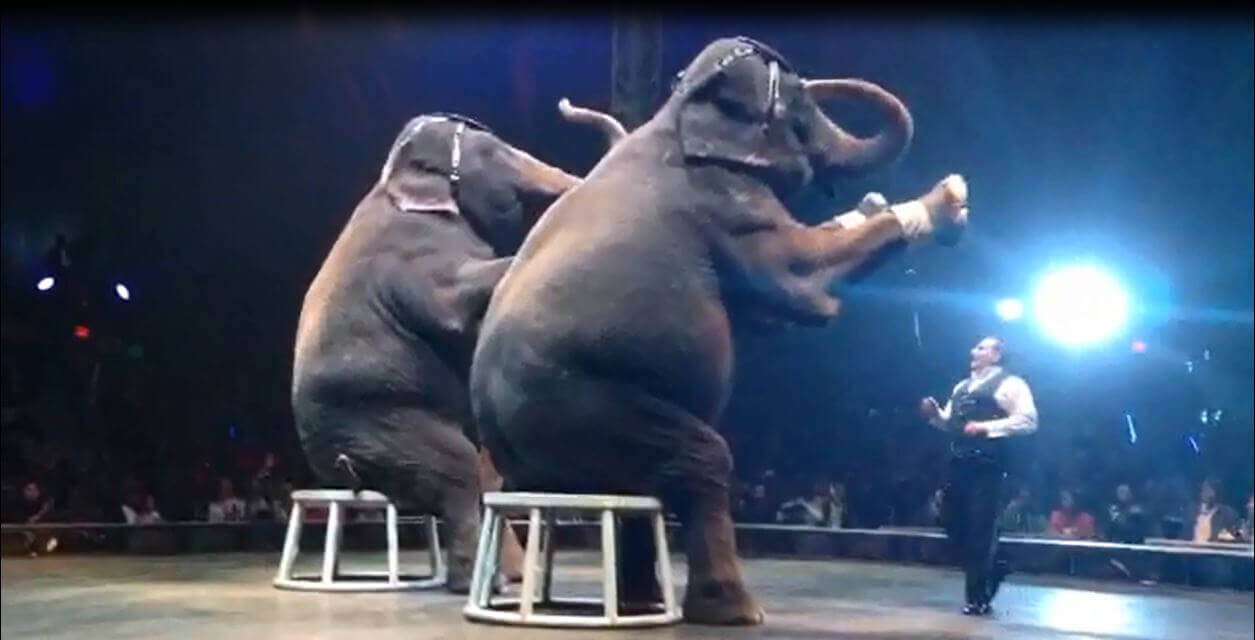 In contrast to the glitter associated with circuses, performing animals' lives are pretty miserable. Because animals do not naturally ride bicycles, stand on their heads, or jump through rings of fire, whips, electric prods, and other tools are often used to force them to perform. 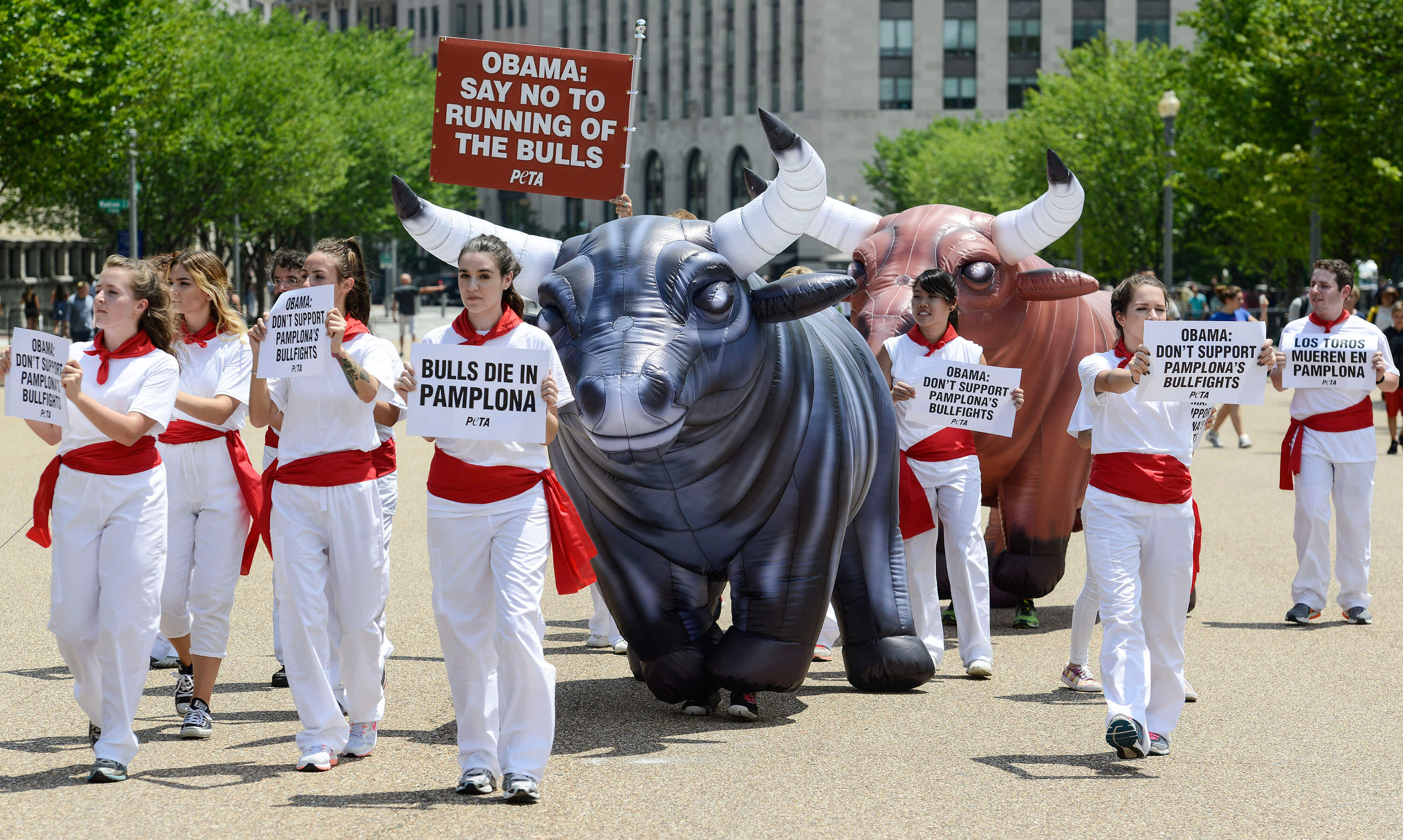 There is nothing remotely "sporting" about sports that involve unwilling animal participants. Learn about the dangers of a variety of sporting events and how you can report cruelty to animals. 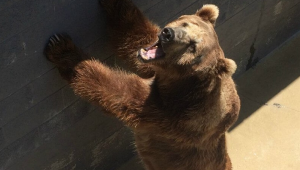 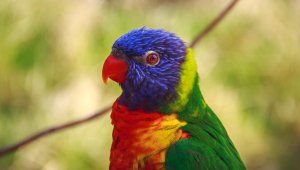 The exotic "pet" trade is big business and many animals pay the price. Learn about what you can do to help stop animal victims of pet shops and dealers. 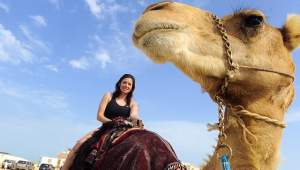 Games, rides, and contests that use animals are anything but "fun and games" for the unwilling animal participants. Learn more about how you can speak up for animals in danger. 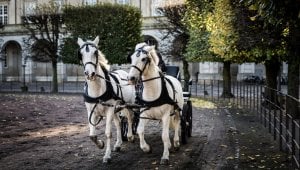 As the list of horse-drawn carriages accidents grows, horses continue to endure pain and suffering because of this outdated practice. Learn how you can help horses. 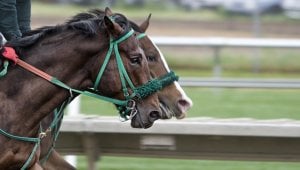 Behind the romanticized façade of thoroughbred horse racing is a world of injuries, drug abuse, gruesome breakdowns, and slaughter. 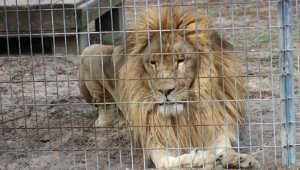 Zoos, pseudo-sanctuaries, marine parks, traveling zoos, roadside zoos, and other similar attractions imprison animals who long to be free. Learn more about how you can help animals.

Roadside Zoos and Other Captive-Animal Displays 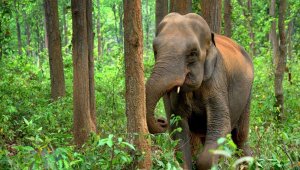