BREAKING: The Circus Cruelty Prevention Act, a bill cosponsored by PETA intended to end circus cruelty in California, has passed! The law bans the use of most animals in circuses.

The measure was officially signed into law today by Gov. Gavin Newsom, seven months after it was introduced in the state Senate by Sen. Ben Hueso. Both PETA and Social Compassion in Legislation—a vanguard voice sponsoring landmark legislation for animals—sponsored Senate Bill 313. We were proud to join the California organization in helping with much of the research, legislative language, and expert testimonies— addition to generating support from other organizations and our members—and we applaud Sen. Hueso for prioritizing animal welfare and public safety by introducing the act.

The ban in California—the most populous U.S. state—follows Illinois’ 2017 ban on traveling elephant acts, New York’s similar 2017 ban, , and New Jersey’s 2018 “Nosey’s Law.” Many cities, including New York City, have also already banned the use of wild and exotic animals in circuses within city limits.

It's official. Wild and exotic animals will be banned from circuses in New York City. pic.twitter.com/Ha85wZAxGI

It’s clear that public opposition to the exploitation of animals for entertainment is stronger than it’s ever been. And while we can’t change the past for animals like in 2016—we can help ensure that they have a future free from harm. PETA won’t rest until all circuses are animal-free, which will stop unconscionable cruelty and show our children that we should respect—and never exploit—animals.

While we toast Sen. Hueso, Gov. Newsom, and all the activists who helped to get SB 313 passed, let’s not forget that animals are still suffering in traveling circuses elsewhere. But together, we can help them.

Keep scrolling to learn more about how this monumental victory was achieved.

With a unanimous vote of 34-0, the California State Senate just made a huge step towards banning circuses that exploit animals!

This means we are one step closer to making it ILLEGAL to exploit most animals in traveling circus acts in #CA. pic.twitter.com/k0zChPohOA

California’s lawmakers are recognizing that no elephant should be chained in a parking lot, no tiger should be caged in a cramped trailer, and no camel should be whipped into performing tricks. A kinder California is on the way, and PETA looks forward to seeing this progressive bill advance through the State Assembly and be signed into law.

The measure—known as State Senate Bill 313—was introduced earlier this year by Sen. Ben Hueso. PETA and Social Compassion in Legislation—a vanguard voice sponsoring landmark legislation for animals—are sponsors of SB 313. Both groups helped with much of the research, legislative language, and expert testimonies, in addition to generating support from other organizations. Lily Tomlin, Lucy Davis, Joaquin Phoenix, and numerous other stars have all joined PETA’s campaign in support of the ban.

PETA staffers and supporters, local government officials, celebrity animal rights activists, and others gathered on the steps of Los Angeles City Hall this morning for a news conference to show support for the Circus Cruelty Prevention Act, a new bill that aims to end circus cruelty in California.

LIVE IN LOS ANGELES: We’re outside of #LA City Hall celebrating the introduction of SB313, a CA bill that will #EndCircusCruelty sponsored by Senator Hueso and supported by LA city council member Paul Koretz. Lucy Davis, Joaquin Phoenix, and more showed up to support! ❤️ #SB313

Posted by PETA (People for the Ethical Treatment of Animals) on Tuesday, February 19, 2019

The measure—known as State Senate Bill 313—was introduced today in the state Senate by Sen. Ben Hueso. Cosponsored by PETA and Social Compassion in Legislation, it would make using or allowing the use of wild or exotic animals in traveling acts illegal. 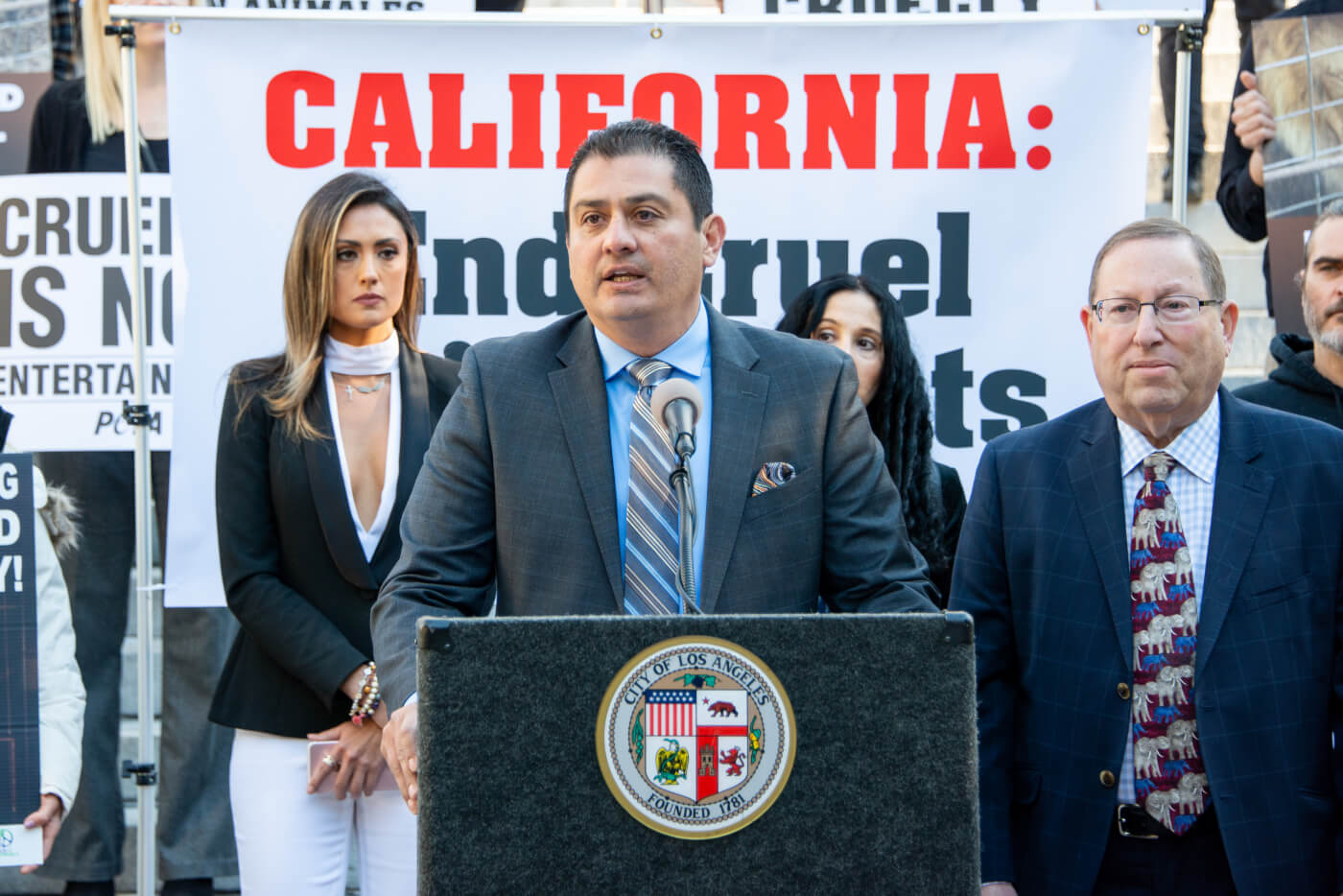 Los Angeles City Council Member Paul Koretz, who is introducing a resolution in the city council in support of the bill, noted how California and the City of Angels have often paved the way for animals and their rights, including by banning bullhooks in Los Angeles in 2012 and recently banning the sale of fur in Los Angeles.

“This is an important next step in the effort to protect wild and exotic animals from being abused for entertainment purposes. I commend Senator Hueso for taking on this challenge,” Koretz said of the Circus Cruelty Prevention Act.

PETA’s own Lisa Lange took to the news conference podium, too:

“When animals are used as props for so-called entertainment, their well-being will always be sacrificed,” she said. “PETA proudly supports the Circus Cruelty Prevention Act and looks forward to its passage, setting the stage for other states to follow suit.” 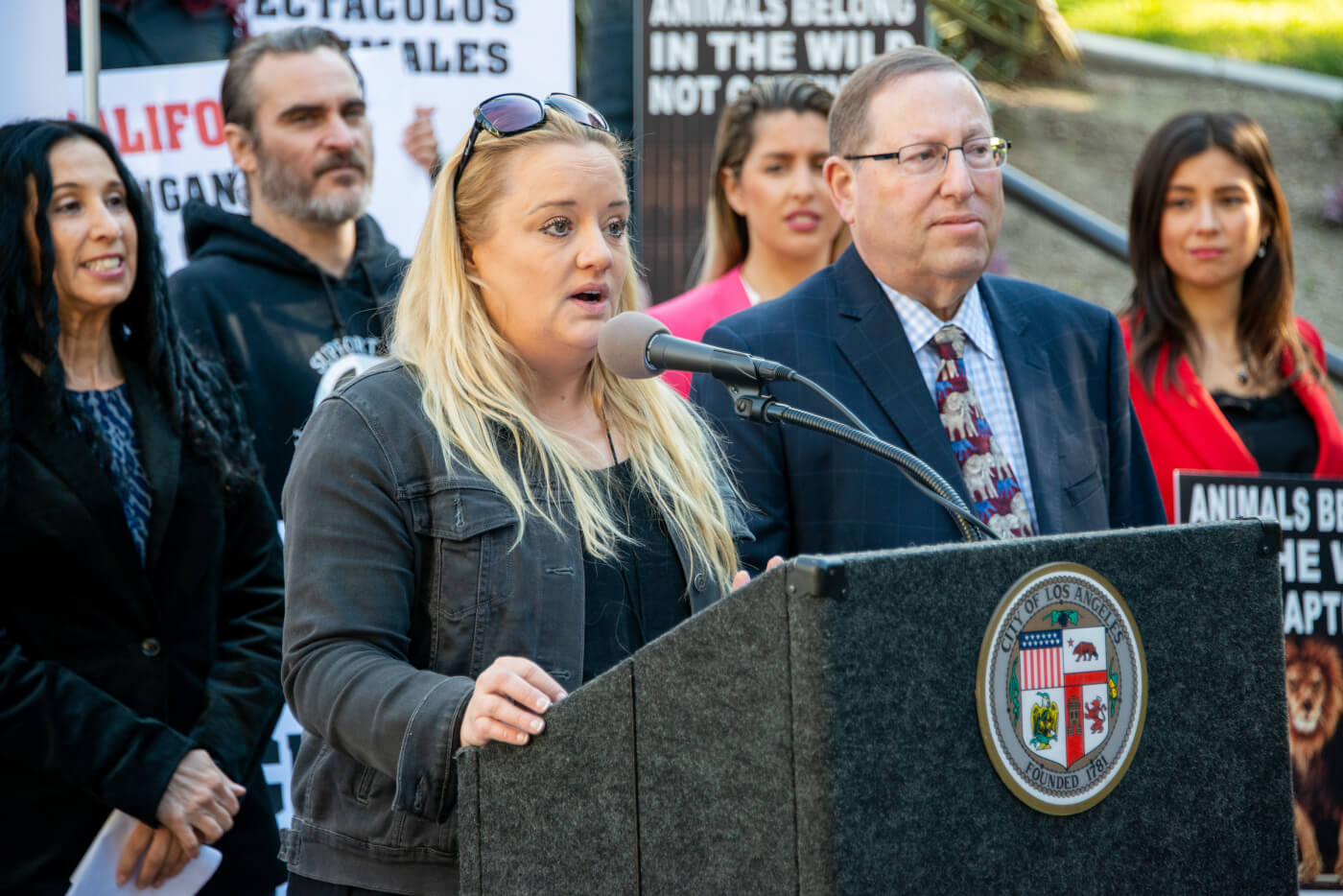 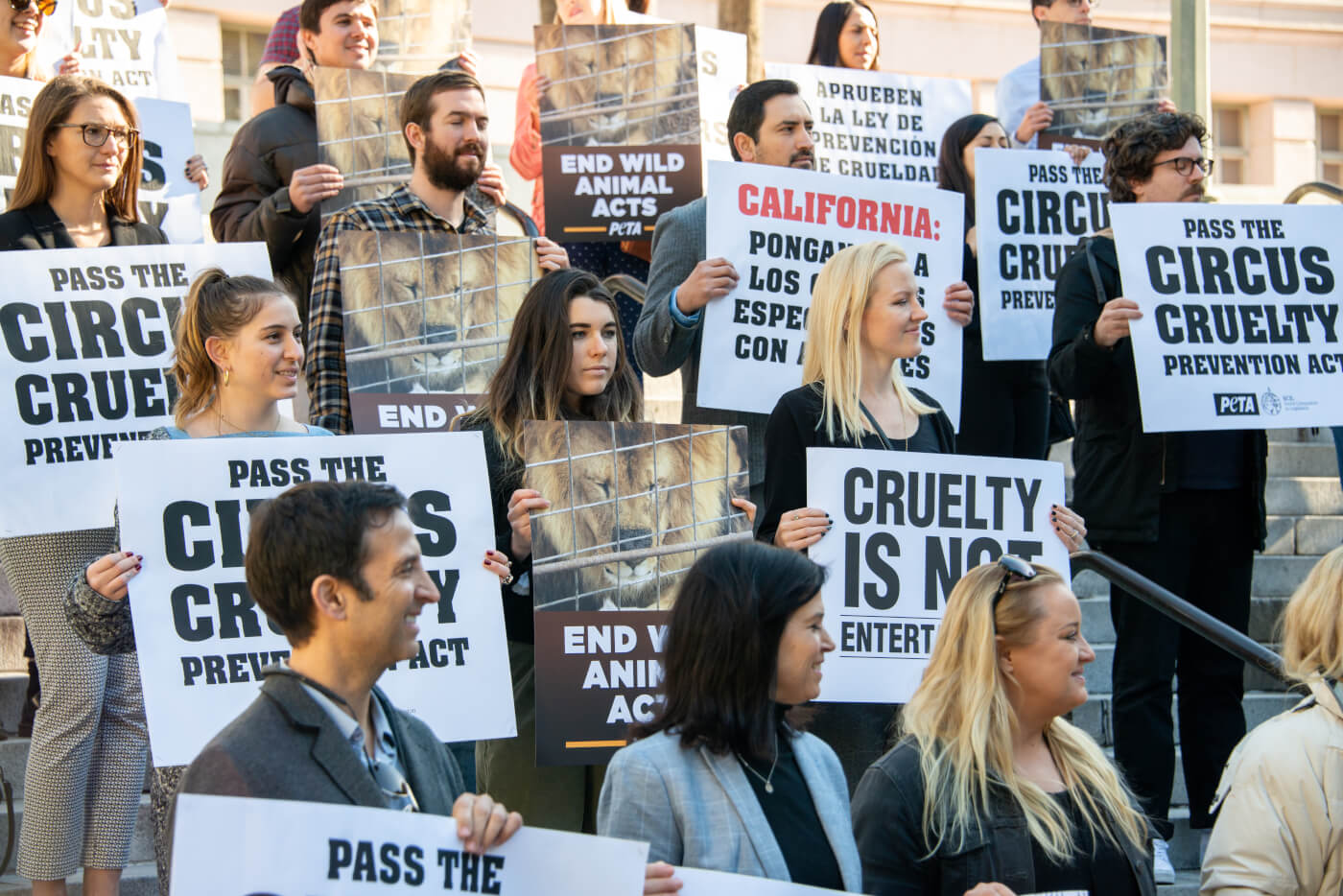 For circuses like UniverSoul Circus that still abuse animals, the message is loud and clear: Californians are only interested in animal-free entertainment.

To force wild animals to perform, circus trainers abuse them with whips, tight collars, muzzles, electric prods, and other painful tools of the trade. During transport, they’re kept in cramped, filthy cages, in which they eat, drink, sleep, defecate, and urinate all in the same place. These animals—frustrated by years of beatings and confinement—have been known to snap. Animals, handlers, and audience members alike have been injured and even killed.

Tyke was abused for YEARS in the circus. What happened to her should never happen to any elephant 😞 #WorldElephantDay

Many cities and counties in California—including Encinitas, Huntington Beach, Los Angeles, Marin County, Oakland, Pasadena, and West Hollywood—have already passed bans or restrictions on the use of wild and exotic animals in traveling acts. But State Senate Bill 313 would make the ban statewide, as New Jersey and Hawaii have already done.

Will you help these animals, too?

It’s been “game over” for Ringling Bros. for some time, and other circuses are adapting to audiences’ compassionate desires by going completely animal-free. But some still force animals to perform confusing tricks under the threat of pain and fear. Join us in asking one of them—UniverSoul—to give the people what they want and eliminate all animal acts from its performances: