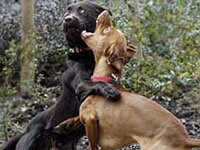 There is nothing remotely “sporting” about sports that involve unwilling animal participants. For the animals who are forced to participate in them, these activities are no game—they are about survival. Even the “winners” emerge physically and emotionally scarred—and the losers pay with their lives.

Bulls who are used in bullfighting are deliberately weakened before the fights by being drugged and sometimes having their horns shaved down in order to disorient them, sandbags dropped on their backs, and petroleum jelly rubbed into their eyes to blur their vision. The tortured bulls never stand a chance against the matador, who tries to kill them slowly with repeated stabbing.

Animals who are used in dogfighting and cockfighting are typically kept chained outdoors in horrific conditions with little or no shelter. They are starved, drugged, and beaten to make them aggressive. If they don’t die in the fighting ring, the “losers” are killed by their trainers—often by being electrocuted, drowned, hanged, burned, or shot. Many others are abandoned to die slowly from their injuries.

In rodeos, individuals try to look tough by provoking relatively tame animals (who, unlike the human participants, don’t choose to participate in these dangerous events) into acting “wild.” Electric prods, spurs, and bucking straps are used to irritate and enrage the animals, all for the crowd’s amusement. Countless animals have been severely injured and killed in rodeos.

Hunting and fishing are unnecessary, violent forms of “entertainment” that tear animal families apart and leave countless animals dead, orphaned, and/or badly injured. Most people who hunt or fish do so under the guise of “saving deer from starving to death in the winter” or to help “regulate the population” or simply for the pleasure that killing gives them—not because they need to in order to survive.

Animals who are used in racing—including horses, greyhounds, and dogs used in dog-sled racing—are often drugged to mask sickness and injury and are forced to race. Between races, they are typically confined for most of the day to cramped stalls or crates with barely enough room to turn around in or, in the case of dogs used for dog-sled races, chained up outside. When they stop winning races, most of these animals are euthanized, shot, sold to laboratories for experiments, or sent to slaughterhouses.

No animal deserves to be abused or killed for “entertainment.” Please help sideline these cruel “sports” by never attending or supporting them.