Each year, thousands of bulls are barbarically slaughtered in bullrings around the world. Over the centuries, bullfighters have found countless ways to rig the “fight” in their favor. Bulls have been weakened with drugs or by having sandbags dropped on their backs. Their horns have been shaved to keep them off balance, or petroleum jelly has been rubbed into their eyes to impair their vision. 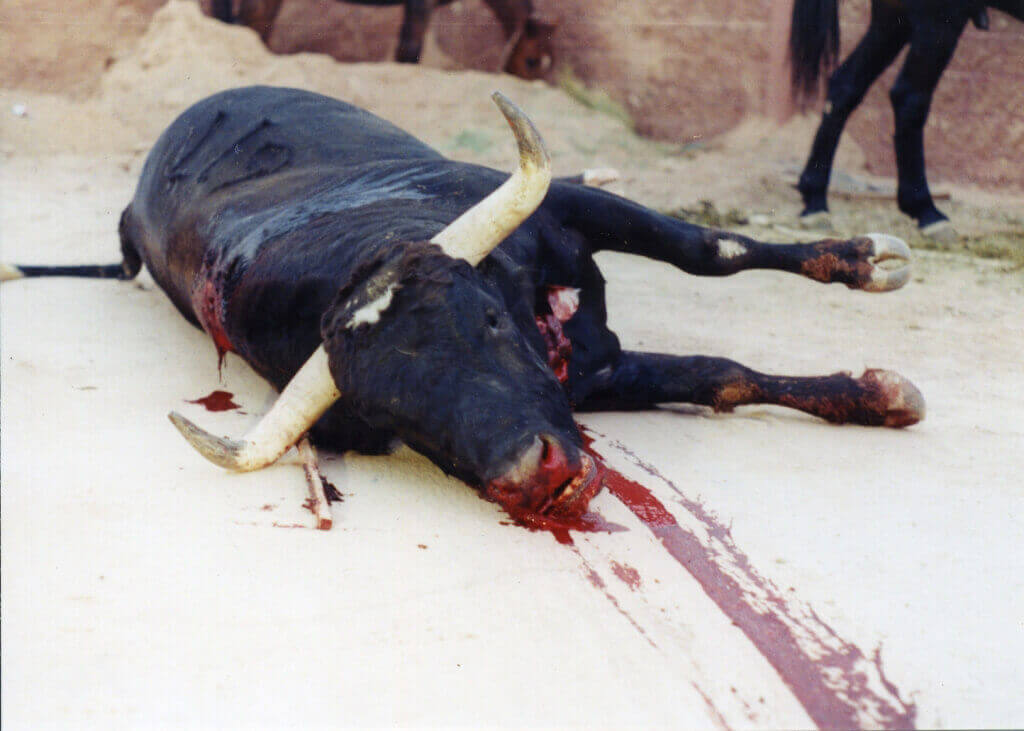 In a typical bullfight, the bull enters the arena and is approached by picadors—men on horses who drive lances into his back and neck muscles. This attack impairs his ability to lift his head and defend himself. The picadors twist and gouge the lances to ensure significant blood loss.

Then banderilleros enter on foot, distract the bull, and dart around him while plunging banderillas—brightly colored sticks with a harpoon point on the end—into his back. When he has become weakened from blood loss, the banderilleros run him in circles until he becomes dizzy and stops chasing them.

Finally, the matador appears and—after provoking a few exhausted charges from the dying animal—tries to sever the bull’s aorta with his sword. If he misses, succeeding only in further mutilating the animal, he exchanges his sword for a dagger to try to cut the spinal cord. If he blunders this stroke, the bull may be conscious but paralyzed when chained by the horns and dragged out of the arena.

If the crowd is happy with the matador, the bull’s ears—and sometimes his tail—are cut off and presented as trophies. A few minutes later, another bull enters the arena, and the sadistic cycle starts again.

The Running of the Bulls

Most tourists don’t know that the dozens of bulls who are forced to run in the streets of Pamplona, Spain, are later killed in the bullring. During the daily runs, spectators and runners hit them with sticks and rolled-up newspapers. The panicked animals can lose their footing on the slippery cobblestone streets and crash into walls, risking breaking bones or otherwise injuring themselves. This violence prompts yet more violence: There are numerous reports of sexual assaults during the “festivities.”

“[T]his is a debate that sooner or later we will have to put on the table. For a very simple reason, and that is that basing the festival on the suffering of a living being, in the 21st century, is something that, at best, we have to rethink.”

International condemnation of this deadly spectacle continues to grow. The Spanish region of Catalonia banned the so-called “sport” after officials were presented with the signatures of 180,000 residents demanding an end to the carnage. From 2008 to 2013, attendance in Spanish arenas fell by 40 percent. In 2008, about 3,300 bullfights were held in the country. In 2012, that figure dropped to fewer than 2,000, and in 2013, it was estimated that fewer than 500 bullfights were held.

In Mexico, the states of Quintana Roo, Sonora, Guerrero and Coahuila have banned bullfighting, and Mexico City banned it “indefinitely” in 2022. Bullfighting is banned in Argentina, Canada, Cuba, Denmark, Italy, and the U.K.

Despite the name, Portuguese bullfights are anything but bloodless. The bull is still stabbed with banderillas by a matador, causing deep wounds and significant blood loss. Then, eight forcados further torment the bull until he’s exhausted. The bull isn’t killed in the ring but is slaughtered outside the arena later.

Bulls aren’t the only victims in bullfights. Horses used to run bulls in circles can quickly become exhausted. They can be seriously gored or killed by charging bulls trying to protect themselves.