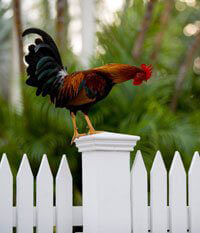 Cockfighting—a blood sport in which roosters are placed in a ring and forced to fight to the death for the “amusement” of onlookers—is illegal throughout the United States.

Roosters are born, raised, and trained to fight on “game farms.” Breeders (also called “cockers”) kill the birds they deem inferior, keeping only the birds who are “game,” meaning willing to fight. Many of these birds spend most of their lives tethered by one leg near inadequate shelter, such as a plastic barrel or small cage. Breeders “condition” the birds to fight through physical work, including attaching weights or blades to their legs for “practice fights” with other roosters, a process that cockfighters call being “tested with steel.”

Breeders often pluck the birds’ feathers and hack off the roosters’ wattles and/or combs (the flesh at the top of their heads and under their beaks) to prevent other roosters from tearing them off in the ring. Since roosters do not have sweat glands, losing these body parts deprives them of the ability to cool themselves. Some “cockers” cut off the birds’ spurs, which are the natural bony protrusions on the legs, so that more deadly, artificial weapons can be strapped to their legs. Law enforcement officials have found performance-enhancing drugs during raids.

What Happens at Cockfights

Cockfights are usually held in round or square enclosures called “cockpits” or simply “pits.” One eyewitness described a fight this way: “With neck feathers fanned and wings whirring, the birds jump and parry at each other. They kick and duel in mid-air, striking at each other with feet and beak.”

If the fighting wanes, handlers pick up the birds and blow on their backs, yank at their beaks, or hold them beak-to-beak in an attempt to work them back into a frenzy. The birds are then put back in the pits, and the fight doesn’t end until one rooster is dead or nearly dead. “Losing” birds are often discarded in a barrel or trashcan near the game pit, even if they’re still alive.

In addition to cruelty to animals, cockfighting is often linked to other crimes, such as illegal gambling, robbery, drug use or selling, and even murder—for instance, a triple homicide occurred at a Texas cockfight. Children are often present at cockfights, and exposure to such violence can promote insensitivity to suffering and an enthusiasm for bloodshed.

“If you’ve got a clandestine operation going somewhere, where there’s some money involved, you’re going to have people of questionable morality show up, try to peddle their wares, like some dope or something. Occasionally you’ll hear where masked men come in with guns and they rob people, because they know, who’s going to call the cops on them?”

According to international health experts, including the World Health Organization, cockfighting has been linked to the spread of the highly lethal bird flu virus from birds to humans through contact with blood and feces.

The Washington Post reported that at one cockfight, bird “owners scrubbed the blood off their birds with bare hands … [t]hen … stitched the wounds around their eyes,” and that “sometimes … the injuries are so severe that owners relieve the swelling by sucking out the blood by mouth.”

If you suspect that this illegal activity is happening in your neighborhood, please contact local law enforcement authorities.