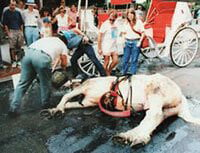 Making horses pull oversized loads like carriages is cruel. Horses are forced to toil in all weather extremes, dodge traffic, and pound the pavement all day long. They may develop respiratory ailments because they breathe in exhaust fumes, and they can suffer debilitating leg problems from walking on hard surfaces.

Horses are sensitive and skittish animals. Animals and people have been seriously hurt—and even killed—when horses have become spooked and run amok.

There have also been countless incidents in which carriages have been hit by impatient or careless drivers. Accidents have occurred in nearly every city where carriage rides are allowed.

“There is no way that cities, with their exhaust fumes, hard road surfaces, and busy traffic patterns can provide a humane … environment for a carriage horse.”

Abused ‘Til Their Dying Day

Horses are afforded no protection under the federal Animal Welfare Act, so the responsibility of looking out for their welfare falls to local animal-control officials. But anti-cruelty laws provide few safeguards to horses, and many humane agencies just don’t have the resources or the time to monitor horse-drawn carriages on a regular basis. Animals can easily be overworked when profit-driven operators fail to follow regulations.

In Charleston, South Carolina, for example, drivers are supposed to take the rectal temperature of horses after a tour when the outdoor temperature reaches 85 degrees or above in order to determine if they can keep working.

In St. Augustine, Florida, horses don’t have to be pulled from service until either the ambient temperature reaches a sweltering 95 degrees or the heat index reaches 105.

In Philadelphia, carriage drivers can force horses to work on public streets until the temperature rises to 91 degrees. In the winter, horse-drawn carriages are allowed as long as the wind chill factor doesn’t fall below a frigid 26 degrees.

And there are no laws preventing old, injured, or spent horses from being sent to slaughter. Horses are considered property under the law, so owners can dispose of them in any way that they want. Since many may consider it cost-prohibitive to care for an animal who isn’t bringing in any revenue, the fate of discarded horses is grim.

If you live in a city where carriage rides are still allowed, contact your local legislators to ask if they will sponsor a ban. Many cities—including Biloxi, Mississippi; Camden, New Jersey; Key West, Palm Beach, Pompano Beach, and Treasure Island, Florida; and Salt Lake City—have already banned horse-drawn carriages.