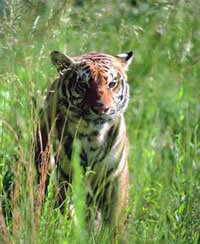 The exotic “pet” trade is big business. Selling protected wildlife in stores, auctions, or on the Internet is one of the largest sources of criminal earnings, behind only arms smuggling and drug trafficking. But the animals pay the price. Many don’t survive the journey from their homes, and those who do survive often suffer in captivity and die prematurely from malnutrition, an unnatural and uncomfortable environment, loneliness, and the overwhelming stress of confinement.

Animals Suffer During Capture and Transport

Animals destined for the pet trade are yanked from their homes in places such as Australia, Africa, and Brazil and are subjected to grueling transport. Parrots may have their beaks and feet taped and be stuffed into plastic tubes that can easily be hidden in luggage, and stolen bird and reptile eggs are concealed in special vests so that couriers can bypass X-ray machines at airports. Baby turtles have been trapped inside their shells with tape and shoved by the dozen into tube socks, and infant pythons have been shipped in CD cases. Many die before reaching their destinations.

In the hands of unprepared or incompetent caretakers, many exotic animals die or are abandoned. The head of the Environmental Crime Investigation unit in Western Cape, South Africa, estimates that 90 percent of exported reptiles die within a year.

Animal control authorities confiscated a crippled cougar cub from a Buffalo, New York, basement. The animal, kept by a teenager, had been fed a diet deficient in calcium and, as a result, suffered from deformed legs. Hedgehogs, who roll themselves into tight balls, can easily become injured if children try to “uncurl” them or if cats attack them. Sugar gliders are very social animals, and if they are not given enough attention, they may self-mutilate or die from the stress of loneliness.

Other people try to return unwanted animals to their natural homes or abandon them outdoors. Without appropriate habitats or rehabilitation, these animals will starve or fall victim to the elements or predators. If they do survive, they may overpopulate and wreak havoc with the ecosystem, killing native species.

The exotic animal trade is dangerous for humans as well. There have been dozens of attacks by captive big cats on humans in the past decade. In one incident, a tiger mauled his guardian’s 3-year-old grandson. A lion killed several dogs and trapped a child in his room, and a Bengal tiger tore off the arm of a 4-year-old boy.

Since 2000, at least four people have been mauled to death by wolf hybrids—the offspring of wolves and domesticated dogs. One veterinarian and animal behaviorist says that “people who breed these animals and sell them as pets are playing Russian roulette. It’s a gross misrepresentation to sell these animals as pets.”

Seventy-five percent of all new infectious diseases originate from nonhuman animals. According to one Centers for Disease Control and Prevention (CDC) officer, “[T]here are all kinds of exotic species that may be unknown vectors of human disease.”

The monkeypox outbreak that affected dozens of people in the Midwest in 2003 was traced to a Gambian rat from Africa. The animal had been housed with prairie dogs in an Illinois animal dealer’s shed. Prairie dogs also have been known to carry the plague and tularemia. The herpes B virus, which is nearly 70 percent fatal to humans, can be transferred from macaques to humans. Human contact with reptiles and other exotic animals accounts for 70,000 cases of salmonellosis each year. Parrots can transfer psittacosis, which can be deadly to humans.

Federal, state, and local governments are passing laws that prohibit the private ownership of certain dangerous species, but most of these regulations are poorly enforced and are designed to protect humans from injury and disease rather than ensure that animals are handled humanely.