PETA has been working harder than ever for animals in 2020—and we’ve got the star-studded 40th anniversary extravaganza to prove it! To celebrate our many animal rights victories and honor some of the celebrities who helped make them happen, we invited people around the world to party with us from the comfort and safety of their own homes. And while we would have loved to toast victories for animals in person, we’ll admit that we’re not mad about hanging out with some of the world’s biggest stars in our sweats.

If you weren’t able to join us for the event, check out the highlight reel and recap below to relive some of the evening’s most memorable moments!

All we wanted for Christmas was for Mariah Carey to come to our party … and she did! The famous diva presented her close friend and proud vegan Jermaine Dupri (or “J.D.,” as she calls him) with PETA’s Humanitarian Award, which he graciously accepted from his hit-making studio in Atlanta.

So excited to be joined by the chart-topping @MariahCarey to honor her friend and vegan activist @JermaineDupri with a #PETA40 Humanitarian Award. pic.twitter.com/tswHo6QboE

PETA gifted the world a 9 to 5 reunion when country queen Dolly Parton presented her former costar Lily Tomlin with PETA’s Humanitarian Award. Self-proclaimed “cause queen” Tomlin also reminded guests that PETA has always had a sense of humor and presented a short segment highlighting all the times that we have collaborated with famous comedians to help animals.

Name a more iconic duo than Nine to Five costars @DollyParton and @LilyTomlin.

There’s no issue @LilyTomlin will stay silent on — she has worked with us to fight against #SeaWorld, the #Iditarod, animal experimentation, fur clothing, and more!

That’s why we’re honoring her with our Humanitarian Award! Thank you for all that you do Lily 💙 #PETA40 pic.twitter.com/7a6jnmzbBM

Sports fans rejoiced seeing Kansas City Chiefs Quarterback Patrick Mahomes present his teammate Tyrann Mathieu with his much-deserved PETA Humanitarian Award, which he received for speaking up for dogs suffering in extreme weather. Did we mention that these two won the Super Bowl this year?

#SuperBowl champions @PatrickMahomes and @Mathieu_Era are tough on the field… but did you know how tough Tyrann is on animal abusers? 🏈 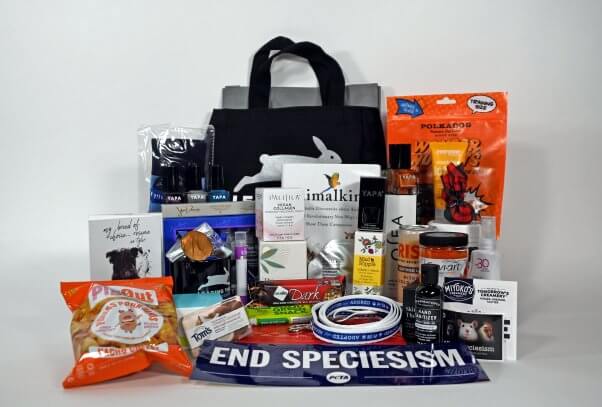 RETWEET if you stand with @billmaher and PETA and want to shut down all cruel experiments on animals! #PETA40 pic.twitter.com/4Jay28lCLE

Shoutout to @EyeOfJackieChan who inspires us every day 🤩 #PETA40 pic.twitter.com/XhUYgwqc0t

Throughout our 40 years, #Beatles legend @PaulMcCartney has been by our side in our fight for animal liberation! #PETA40 pic.twitter.com/jd2yXif3Zb

Joaquin Phoenix; his wonderful mom, Heart; and his siblings Liberty, Rain, and Summer led viewers in a heartfelt moment, presenting an investigator who went undercover to expose violence in the wool industry with the River Phoenix Activist Award.

“Run to the rescue with love, and peace will follow.” -River Phoenix ❤️

So honored to have Joaquin and the entire Phoenix Family help us celebrate 40 years of animal rights activism by presenting The River Phoenix Award 🙏 #PETA40 pic.twitter.com/TrFV7oHRU4

An activist in her own right, Kat Graham invited viewers to change the world and end speciesism by changing what we eat, what we wear, and how we live. Filmed at Full Circle Farm Sanctuary in Atlanta, she had help from some energetic rescued goats and sheep when accepting her PETA Humanitarian Award and delivering her crucial message.

Congratulations to the beautiful and compassionate @KatGraham for being recognized with PETA's Humanitarian Award! #PETA40 pic.twitter.com/ZdxPwFviOr

Brother and sister duo Jesse & Joy gave viewers a reason to get off the couch and dance when they performed their hit song “Love” all the way from Mexico City. And they had the most adorable introduction from young actor Vivien Lyra Blair, whose PETA campaign basically broke the internet.

Animals are not ours to abuse in any way 🙌

And these three superstars know it!

Edie Falco walked us through some of PETA’s victories in her hometown of New York City, including our strategic work on Wall Street buying stock in companies that support animal abuse, such as SeaWorld and slaughterhouses, to advocate for animals from the inside.

Fashion icon Tim Gunn also joined us from the Big Apple, in front of fashion designer Stella McCartney’s SoHo shop, to share PETA’s work in getting top designers to adopt animal-friendly fashion in their collections.

Style icon @TimGunn has been “gunning” hard for animals for years.

His voice and influence have been essential in creating many major changes for animals in the fashion industry! #PETA40 pic.twitter.com/fuQ44td3eW

Oscar winner Casey Affleck donned a tux for the occasion to show everyone that animals have a voice—even if we can’t always understand what they’re telling us. He also introduced NBA legend and longtime vegan John Salley, who reminded everyone while accepting his award that tofu never caused a pandemic.

You heard the #Oscar-award winner 🗣

PETA supporters were very excited to celebrate our 40th anniversary with their animal companions: 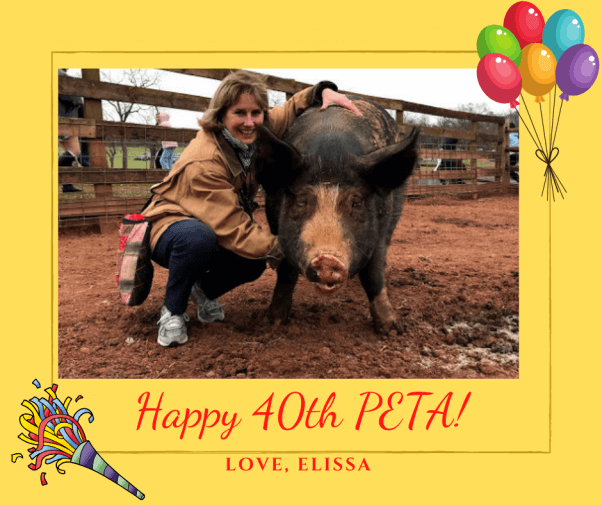 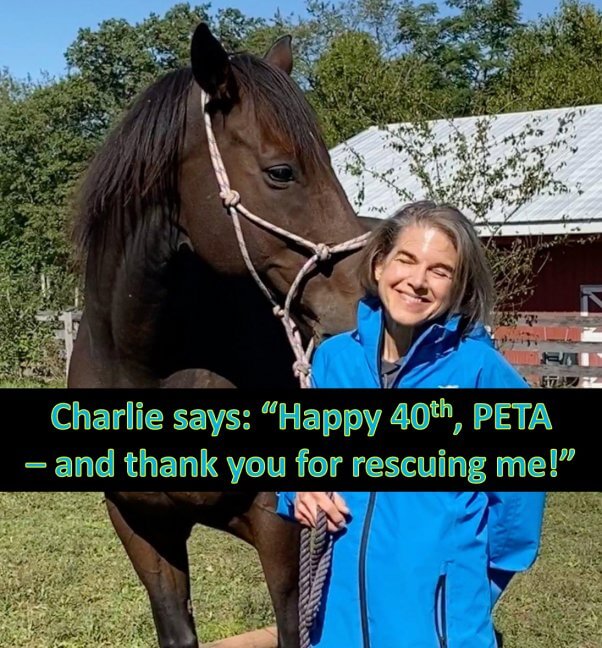 When influencer Eva Gutowski accepted her award, she urged viewers to speak up for what they believe in, no matter how big or small their platform may be.

Yes! @lifeaseva is so right 👊

Never be silent and always speak up when you see injustice. #PETA40 pic.twitter.com/fsakjy8fGv

It was a true punk-rock moment when Pretenders frontwoman Chrissie Hynde took us to London to celebrate PETA’s major vivisection victories and present her “favorite rock star” Iggy Pop with his PETA Humanitarian Award.

Thank you for using your talents to speak up for animals 🎶 #PETA40 pic.twitter.com/83z9HrL7m2

James Cromwell led us on a trip down memory lane by counting down PETA’s “Greatest Vegan Hits,” starting with our first-ever vegetarian commercial in 1990 starring k.d. lang. The “Meat Stinks” PSA actually got the singer’s record banned from country radio (but her album eventually went gold—so you’re welcome, k.d.!).

So much love to actor and activist @JamesoCromwell for being a part of so many important campaigns for animal liberation over the past few decades! #PETA40 pic.twitter.com/KRdpUvIxDY

Anjelica Huston had some help from her playful feline friends to honor the work of PETA’s fieldworkers, highlighted in the documentary Breaking the Chain, which the Oscar winner executive produced. She also presented a retrospective of all the top athletes who have joined PETA to speak up for animals.

We're honored to work closely with the woman who does it all — direct, produce, act, write, and serve as the executive producer of #BreakingTheChain, @anjelicahuston! #PETA40 pic.twitter.com/4EiARBblI6

Things got dramatic when Kate del Castillo showed up on screen sharing a story from PETA history that almost seems too absurd to be true … almost.

You’re not going to believe this 😳

¡Ay, dios mío! @katedelcastillo’s story about a #SeaWorld spy trying to stop PETA members from speaking up for animals is CRAZY but totally TRUE! #PETA40 pic.twitter.com/77I0T99nH1

Jillian Michaels and her horse JB joined us to celebrate our many victories for animals used in entertainment, from pushing racetrack owners to adopt massive drug reforms to keeping real animals safely off television and film sets.

For 40 years, PETA has worked to help animals exploited in the entertainment industry on every level.

Couldn’t think of a better duo to speak on this progress than @JillianMichaels and her horse. #PETA40 pic.twitter.com/7or3XNpvr3

George Lopez reiterated what many animal advocates know to be so true: We don’t rescue animals—they rescue us. Alongside one of his rescued Chihuahuas, the famous comedian introduced PETA President Ingrid Newkirk, who reminded us that humans are just one animal among many.

Cheers to all who tuned in to celebrate and support our work! Our staff and the animals we help thank you for your compassion.