At that meeting, the CEO acknowledged that the novel coronavirus pandemic has increased consumer demand for vegan meats. If Maple Leaf wants to produce the most sustainable protein on Earth, it must drop animal meat, which exacerbates deforestation, pollution, and climate change. Vegan protein is the inevitable future.

What do Tyson Foods, Smithfield Foods, and Maple Leaf Foods all have in common, aside from being meatpacking companies struggling through catastrophes related to COVID-19? They all have a new shareholder: PETA.

Thousands of slaughterhouse workers have already tested positive for COVID-19 and many are dying—and now, we’ve purchased stock in major U.S. and Canadian meatpacking companies.

As a shareholder, we’ll attend annual meetings, correspond with other stockholders under Securities and Exchange Commission rules, and directly urge CEOs to convert all slaughterhouses to producers and packers of only vegan meats. A PETA representative already attended the annual meeting of Smithfield’s Hong Kong–based parent company, WH Group, in Hong Kong on June 2—we exchanged business cards and asked, “When will Smithfield switch to producing exclusively vegan meats?”

Another pandemic is inevitable if humans fail to learn from this one.

So we’re pushing meatpacking companies to shut down their slaughter lines and switch to making vegan meats.

Why should Tyson Foods embrace its Raised & Rooted plant-based line?

As more than 1,000 employees have tested positive for COVID-19, Tyson has been hard hit by the coronavirus crisis. We recently protested near Tyson’s Iowa pig slaughterhouse, calling on the company to embrace its vegan side. And we’ve urged CEO Noel White in a letter to reinvent Tyson as a producer of exclusively vegan meat, which we’ll continue to do using our new shareholder position.

Activists in Iowa urged Tyson to reinvent itself as a vegan meat producer, and PETA has offered to cover a portion of the costs needed to retrain employees.

PETA undercover investigations have revealed the shocking cruelty that chickens at Tyson slaughterhouses have been forced to endure—workers have even torn their heads off, which a supervisor said was acceptable. These birds are individuals who, when not being raised and killed for human consumption, can remember more than 100 different faces of humans or other animals and possess their own language with over 30 different sounds.

Why should Smithfield Foods stick with its vegan brand, Pure Farmland?

The future is vegan, and even Smithfield Foods—owned by Hong Kong–based WH Group—knows it. Why else would it have released a range of vegan meats last year? And if Smithfield has any hope of escaping the COVID-19 hole that it has dug for itself, it’s essential that it leave its animal-slaughtering days in the rearview mirror.

More than 900 cases of COVID-19 are linked to Smithfield’s slaughterhouse in Sioux Falls, South Dakota, so PETA’s “Pandemic Pig” led another protest calling on the company to stay closed or switch to vegan pork.

Roughly 900 COVID-19 cases have been tied to the Smithfield pig slaughterhouse in Sioux Falls, South Dakota, which made it the number one coronavirus hotspot in the U.S. last month. And although CEO Kenneth Sullivan has thus far ignored our protests and letter urging him to reopen Smithfield as a producer of healthy and 100% humane vegan pork, we look forward to discussing such business-saving suggestions at future annual meetings.

We’ll use our shareholder position to push Hormel, Maple Leaf Foods, and other companies to pack only vegan meat, too.

If Hormel, for example (whose subsidiary Jennie-O operates turkey slaughterhouses and which saw more than 100 employees test positive for COVID-19 at its Rochelle Foods facility in Illinois), focused on expanding its Happy Little Plants line, it would likely have happy little employees and happy little customers—because plants never caused a pandemic. This would surely bring happiness to little pigs, who don’t want to be beaten with metal gate rods, hit in the face, be jabbed in the eye with clothespins, or be kicked in the genitals—all of which were documented during a PETA undercover investigation at an Iowa pig factory farm that supplied piglets to be raised and killed for Hormel.

Why would Maple Leaf Foods, the largest meat company in Canada, continue to slaughter cows, chickens, and pigs—who enjoy listening to music, playing with soccer balls, and getting massages—when its flesh-free Lightlife and Field Roast products are favored by vegans and nonvegans alike? 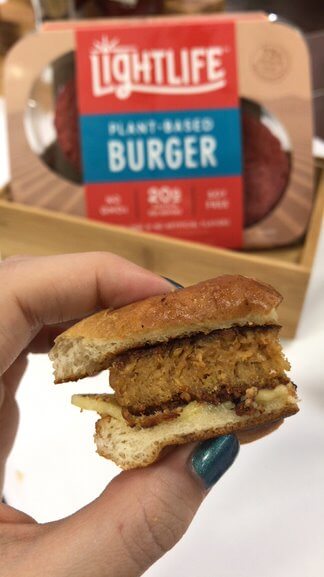 If Kraft Heinz focused on its classic meat-free brand, Boca, like it’s focused on the health and safety of its Hotdoggers by canceling Weinermobile tour events in light of the pandemic, we’d all be better off.

A Wienermobile made its way through Long Island, New York, in 2019—its Hotdoggers changing the schedule in order to dodge protesters eager to let passersby know exactly where their hot dogs come from and what’s in them.

A COVID-19 outbreak wasn’t the first health scandal experienced by chicken-killing company Sanderson Farms—not too long ago, ketamine (the same drug that teenage rave-going hedonists have been known to hallucinate on) was found in a chicken item the company marketed as “all natural.” Shortly before that, we pulled back the curtain on a massive hatchery operated by Sanderson Farms, where newly hatched unwanted chicks were left alone to languish before finally being ground up alive.

If ever there were a slaughter company that desperately needed a vegan makeover, Sanderson Farms is it.

The novel coronavirus originated in a Chinese “wet market” where live and dead animals were sold for human consumption. Swine flu began on a U.S. factory farm. And other deadly influenza viruses have been traced to chickens. The Centers for Disease Control and Prevention warns that approximately 75% of recently emerged infectious diseases affecting humans originated in other animals.

Health experts say that the next pandemic is inevitable if we don’t change the way we treat animals.

So while PETA dukes it out in the boardroom, you can do your part at the grocery store. As consumers, we have the power to spare animals excruciating pain and suffering by making better choices, including by buying vegan meats instead of flesh that somebody was killed for. By choosing to buy faux meats from Lightlife, Field Roast, Boca, and Pure Farmland, you’re sending a message to companies like Smithfield, Maple Leaf Foods, and Kraft: If it’s not vegan, we’re not buyin’. Click on the button below if you’re with us.

I Want to Save Nearly 200 Lives per Year