Actor and activist Joaquin Phoenix wants to remind everyone that we all have the power to change the world—and much of that starts with what we eat.

The Oscar-winning actor, who has been vegan since the age of 3, has collaborated with PETA to speak out against everything from the wool industry to fishing. PETA’s 2019 Person of the Year is using his star power to raise awareness of the violence inflicted on animals on farms and to empower fans to take action by going vegan, in a print campaign shot by world renowned photographer Juergen Teller. 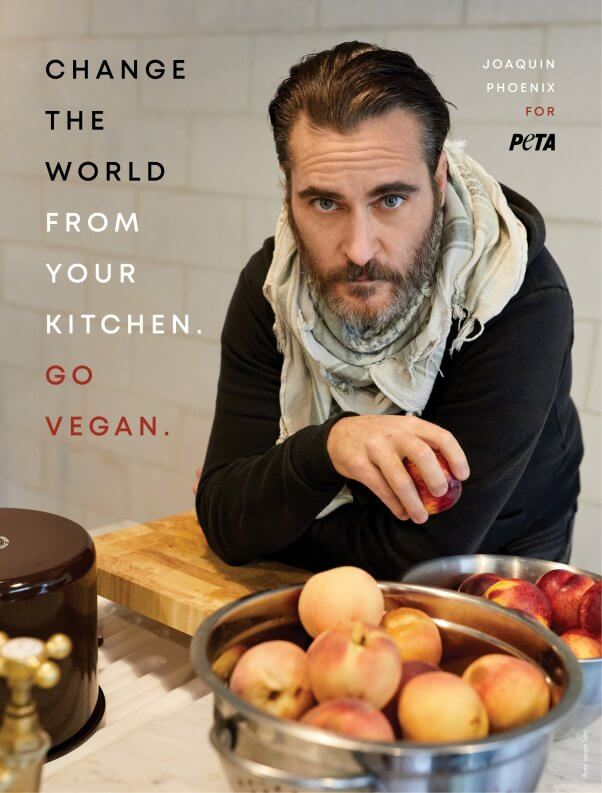 Change the World From Your Kitchen

“There’s so much pain in the world that we are powerless over, but being party to animal suffering is not one of them,” Joaquin says from his kitchen in his latest PETA video. While Americans are still being asked to maintain social distance and shelter at home because of COVID-19, Joaquin is reminding fans that they can change the world right from the comfort of their own homes by choosing to live vegan.

Joaquin lends his voice to a PETA investigation exposing a Walmart egg supplier whose workers were caught on video abusing hens and leaving them for dead. Our investigative footage reveals that more than 100,000 hens were yanked around, slammed against metal boxes, and crudely gassed, while hundreds of others died trapped in the wire flooring of their cages.

By exposing the suffering on this Ohio egg farm, Joaquin is appealing directly to consumers, urging them to think about the impact that their choices have on the lives of billions of sentient beings.

“It’s easy to escape personal responsibility by actively avoiding the truth,” Joaquin says. “But I hope you will join me in rejecting animal cruelty, so much so that you’ll explore the many benefits of being vegan.”

What are those benefits? Well, there are far too many to fit into a single blog post—but here are just a few to get you started:

Ditch Eggs and Save Lives

Chickens are clean, fastidious birds who can remember more than 100 different faces of humans or other animals and even have their own unique language with more than 30 different sounds. They also form complex pecking orders, in which each bird not only understands their ranking but also can recall the faces and ranks of more than 100 other birds. However, when chickens are forced to live inside cramped, filthy wire cages on farms like this one, they’re left with no freedom to express their natural behavior and are often deprived of the most basic necessities of life.

Wondering how you can help birds like those suffering on this egg farm? It’s now easier than ever to ditch chicken flesh and eggs. (For instance, see this breakfast sandwich.) If you love to cook, check out our easy egg replacer guide for tips on making everything from meringues to veggie burgers. There are also many wonderful vegan egg brands on the market, so you can make scrambled eggs, omelets, quiches, and more, all without harming chickens!

If Joaquin’s ad has left you craving peaches, try this tasty animal-free recipe for cinnamon peach skillet rolls with a peach glaze.

Urge Walmart to Reconsider Its Ties With This Egg Supplier