From taking on Elisabeth Murray, an experimenter at the National Institutes of Health (NIH) who spends her days sawing open monkeys’ skulls and pumping toxins into their brains, to calling out Texas A&M University for experimenting on dogs deliberately bred to suffer from canine muscular dystrophy (MD) and urging customers to shop cruelty-free, these 16 influential figures have joined forces with PETA to help end testing on animals:

Davey Havok—longtime vegan and passionate advocate for animals—teamed up with PETA and his new friend Wee Man to spread an important message. The musician says that his choice of costar came down to the speciesism of which rats are often the victim. Despite these animals’ caring nature and intelligence, experimenters kill millions of rats like Wee Man each year in cruel and useless experiments that waste taxpayer dollars. In U.S. laboratories, they’re even denied the meager protections of the federal Animal Welfare Act.

In his campaign, Davey explains the horrors of the “forced swim test.” In this widely discredited test, experimenters drop mice, rats, guinea pigs, hamsters, or gerbils in inescapable containers filled with water. The panicked animals try to escape by attempting to climb up the sides of the beakers or even diving underwater in search of an exit. They paddle furiously, desperately trying to keep their heads above water. Eventually, they’ll start to float. Experimenters say this test tells us something about the effectiveness of antidepressants, but a study has shown that it’s no more predictive than a coin toss.

“In animal testing that still occurs today, millions and millions of rats and rodents are destroyed for no good reason whatsoever.”

Known for her work on popular TV shows such as The Punisher and Supergirl, actor Floriana Lima used her real-life powers to be a superhero for animals by speaking out against the forced swim test.

After discussions with PETA, Johnson & Johnson, Bayer, GlaxoSmithKline, AbbVie, Roche, AstraZeneca, Novo Nordisk A/S, Boehringer Ingelheim, Pfizer, Bristol Myers Squibb, and other companies all announced that they would no longer conduct or fund this test.

Sir Paul McCartney has been a strong advocate for the Save Cruelty-Free Cosmetics European Citizens’ Initiative. Across Europe, millions of animals each year are used in experiments that inflict often severe suffering and overwhelmingly fail to deliver on their main promise, which is to improve human health. The victims include mice, fish, rats, guinea pigs, rabbits, cats, dogs, and monkeys. 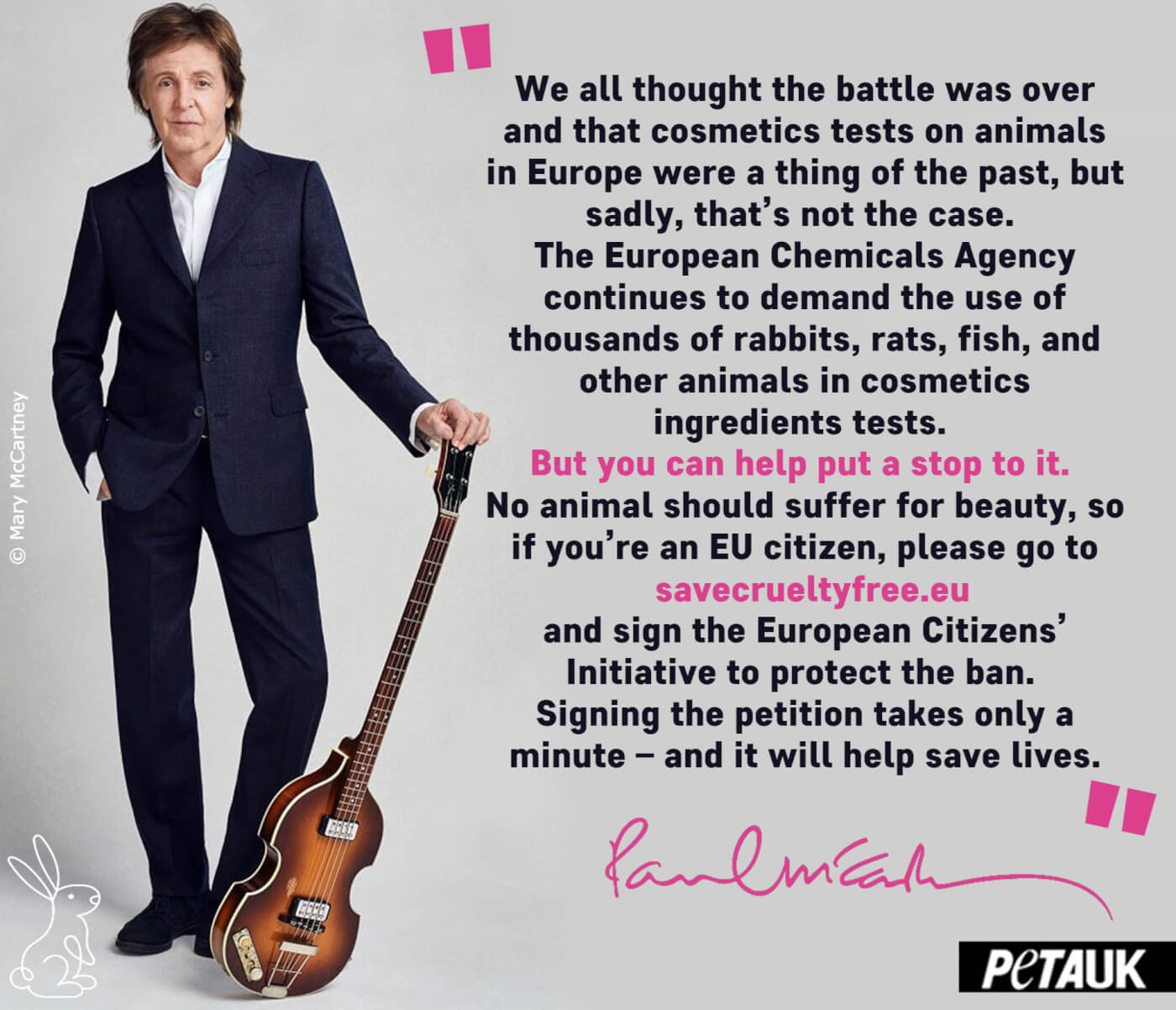 Club de Cuervos and La Casa de las Flores star Sofía Sisniega stripped down for a good cause, joining PETA Latino to encourage shoppers to keep all products tested on mice, rats, rabbits, guinea pigs, and other animals off their shopping lists. 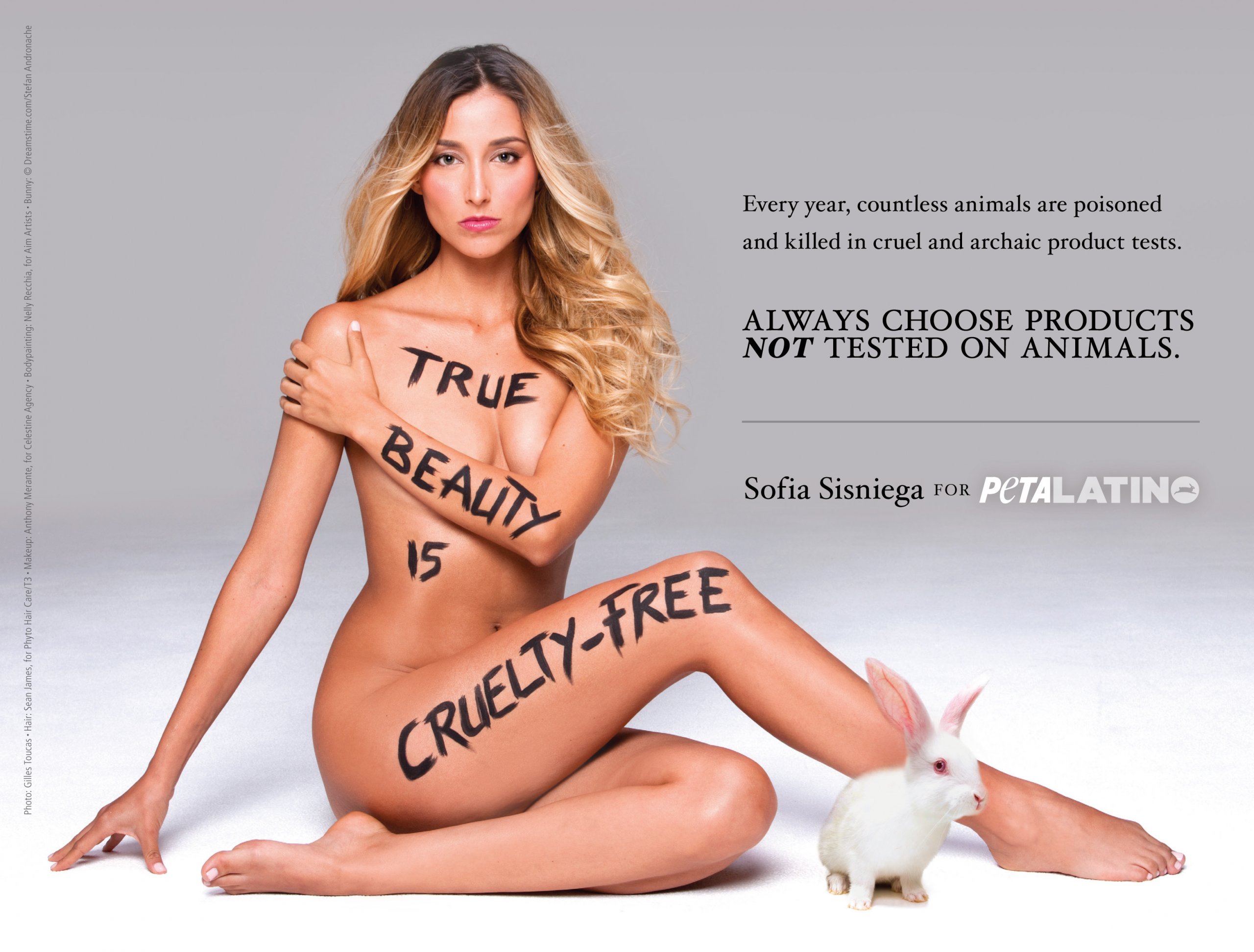 Musician Dave Navarro is known for his body art, guitar shredding, and iconic rocker look. His intense rocker style includes an array of beauty products that help give him his dark edge, but some makeup was too dark even for him. So when he discovered that some companies perform cruel tests on animals, he knew that he had to speak out and urge everyone to buy only cruelty-free products. 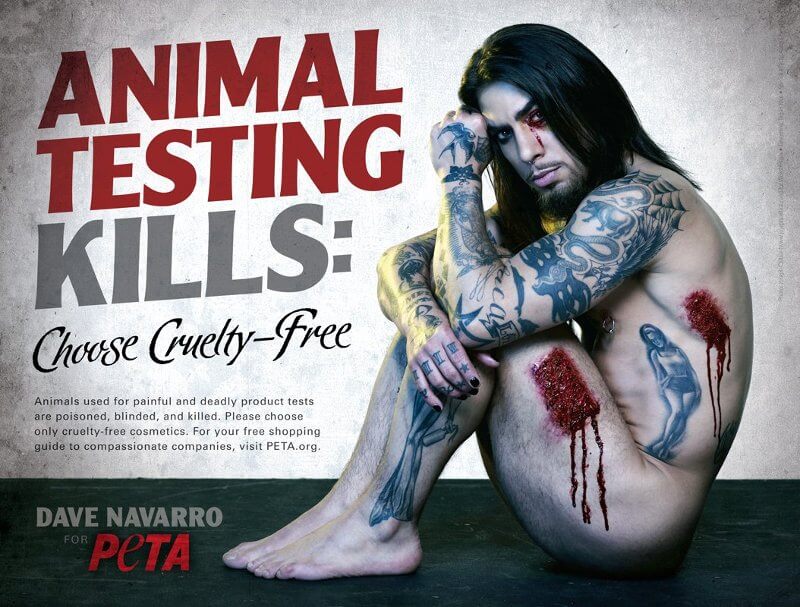 Actor Evanna Lynch, best known as Luna Lovegood in the Harry Potter series, sent a letter on PETA’s behalf calling on the president of Johns Hopkins University (JHU) to end the school’s brain experiments on barn owls, writing, “There can be no ethical justification for this grotesque cruelty.” The longtime vegan also teamed up with PETA to make a new kind of makeup tutorial, showing fans what life for animals in laboratories is really like.

UNIVERSITY OF MICHIGAN: ONE OF THE WORST ANIMAL TESTING OFFENDERS

The Grace and Frankie star and Detroit native wrote to the University of Michigan (UM) to ask its officials to stop allowing cats and pigs to be abused in cruel and deadly flight training exercises. In a letter to UM President Mary Sue Coleman, Tomlin wrote, “Having trainees jam hard tubes down cats’ throats, cut holes into pigs’ throats and chests, and stab needles into the animals’ bones and the tissue surrounding their hearts is simply unjustifiable when modern and superior alternatives are available.”

“Godfather of Punk” Iggy Pop has worked with PETA on multiple occasions to speak out against animal testing. After learning that UM, his alma mater, was abusing and killing cats and pigs in its Survival Flight course for nurses, Iggy fired off a letter on PETA’s behalf, urging the university to drop these cruel and archaic animal labs.

In 2013, after a yearlong campaign by PETA and supporters like Lily and Iggy, UM ended its use of cats in its Survival Flight intubation training laboratory!

Cromwell was arrested for a good cause when he stormed into the University of Wisconsin (UW) System Board of Regents meeting to call for an end to the school’s cruel brain experiments, in which experimenters mutilated, deafened, starved, and eventually killed cats.

Maher spoke out in defense of cats who were tortured in cruel brain experiments at UW-Madison. But thanks to PETA’s campaign, the embattled laboratory closed its doors, and the remaining four cats in the laboratory, including 3-year-old tabbies Rainbow and Mango, were adopted into private homes.

Bill Maher Speaks Out Against University of Wisconsin–Madison Cat Lab Cruelty from Official PETA on Vimeo.

With the help of supporters like Cromwell and Maher, PETA’s steadfast campaign forced this UW laboratory to close its doors in 2015!

McCartney donated his 1993 protest song and anti–animal experimentation anthem “Looking for Changes” to PETA’s campaign to end cruel experiments on animals funded by NIH, which wastes $19 billion in taxpayer funds each year on pointless tests.

“I’m looking for changes that will continue the momentum of getting animals out of laboratories,” says McCartney. “Experiments on animals are unethical—they’re a colossal failure and a waste of time and money. We can and must do better.”

The Real Time With Bill Maher host also partnered with PETA to speak out against institutions that conduct tests on animals. He called bullsh*t on Murray’s NIH experiments, reminding viewers that she tortures monkeys using their taxpayer dollars.

Iggy also donated his hit song “Free” to PETA for a video highlighting the suffering of monkeys held captive and used in cruel laboratory experiments at NIH and other facilities:

PETA honorary board member and Oscar winner Anjelica Huston wrote to former NIH Director Francis Collins, urging him to slash the agency’s bloated budget for expensive and ineffective experiments on animals and instead pursue human-relevant research that stands a chance of producing results.

“Studies that are pointless, wasteful, or extremely cruel should be ended now, and that means the emphasis should be placed on non-animal studies, because they offer real promise.”

—Anjelica Huston in a letter to NIH

“Enough is enough” was the message that more than 5,000 Texas A&M faculty and staff heard on their phones. When Lily Tomlin, made a very personal plea for their support in urging the university’s former president, Michael K. Young, to end the school’s experiments on dogs.

James Cromwell was handcuffed once again during a PETA protest at Texas A&M’s Board of Regents meeting. He condemned the university’s experiments on dogs, which had been going on for almost 40 years but did not result in a single treatment that can reverse debilitating MD symptoms in humans.

When Oscar winner Casey Affleck learned that Texas A&M experimenters had been tormenting dogs for over 35 years, he knew that he had to speak up. In addition to filming a public service announcement calling out the school, the devoted dog guardian also filmed a video with an adorable rescued dog and spoke lovingly about his own companion, Bella, who was found on train tracks with three legs—likely after being used as a “bait dog.”

Award-winning director and lifelong Texan Richard Linklater sent a letter on PETA’s behalf, urging Texas A&M to end its canine MD experiments. “There’s no doubt in my mind that a cure must be found for MD, but these experiments are purposefully bringing dogs into the world in order to subject them to a shortened life of pain, misery, and neglect,” wrote the Boyhood filmmaker. “I’m urging you to end these experiments and release the dogs for adoption so that they can live out their remaining days in comfort.”

The dogs at Texas A&M have also received support from Mötley Crüe cofounder and bassist Nikki Sixx, who sent a letter to the university’s president stating his opposition to subjecting “man’s best friend” to a life of suffering. “I have enjoyed going to Texas throughout my whole touring career. Getting to experience the culture, the food, and the people there over the last few decades has been incredible,” Sixx told PETA. “My wife and I are the owners of two incredibly lovable golden retrievers. So to say the experiments at Texas A&M University are absolutely heartbreaking is beyond an understatement.”

Tennessee Titans quarterback Ryan Tannehill sent a letter to Texas A&M, his alma mater, urging it to end its cruel experiments on dogs. He pointed to the “heartbreaking” eyewitness video footage obtained by PETA that shows dogs who were deliberately bred to develop a crippling and painful form of canine MD.

In 2019, Texas A&M bowed to pressure from PETA and these kind stars, ending its MD laboratory dog-breeding program. The laboratory’s funding has dried up, and at least 52 dogs have been released for adoption. Sadly, others have died without ever knowing the love and comfort of a home.

Peter Nghiem, the MD laboratory director, publicly claimed that all healthy dogs would be released for adoption when he was done with them. But that was a lie: Nine healthy dogs were transferred to the Texas A&M veterinary school teaching program instead. The university has repeatedly lied to callers, saying that the dogs are up for adoption. However, records obtained by PETA show that they aren’t.

Join PETA, Lily, James, Bill, and others in speaking out: Let the school know that this is unacceptable. Dogs deserve more and better. They deserve the warmth, safety, and companionship of loving homes, not florescent lights, barren metal cages, and being exploited for failed experiments.

ANIMALS ARE NOT OURS TO EXPERIMENT ON

Two minutes—that’s all the time actor and Saturday Night Live alum Kevin Nealon needs to debunk pseudoscience and make the case against testing on animals.

One more time for the people in the back: Animals aren’t laboratory equipment. Please join the efforts of these celebrities and PETA to help end testing on animals by sharing this article with your family, friends, and followers.