Thankfully, American Horror Story actor James Cromwell didn’t lose his voice when he was arrested after getting loud for animals at SeaWorld or at Texas A&M University with PETA, because he’s using it now to speak up for monkeys. That’s right—over 10,000 National Institutes of Health (NIH) employees woke up to a phone call in which the familiar voice described what can only be called a real-life Maryland horror story inside their very own government laboratory. The agency has been bankrolling monkey terror experiments for the past three decades and appears to have no qualms about squandering tens of millions of dollars on experimenter Elisabeth Murray’s hideously cruel curiosity-driven studies, in which monkeys are maimed, tormented, and killed for no apparent reason. The Academy Award nominee is no stranger to hair-raising storylines on screen, but behind the scenes, he had a few choice lines for NIH:

“An ‘American horror story’ is taking place in your agency right now,” he said in the call. “Your colleague Elisabeth Murray is receiving millions of dollars to torture and experiment on living monkeys.”

The Emmy award-winner goes on to explain that Murray carves out sections of monkeys’ skulls, injects toxins into their brains to cause permanent brain damage, and then locks them inside small cages and terrifies them with rubber snakes and spiders. Her speciesism appears to know no bounds, as she drills holes and screws posts into the monkeys’ skulls, and after torturing them for years, she kills and dissects them. 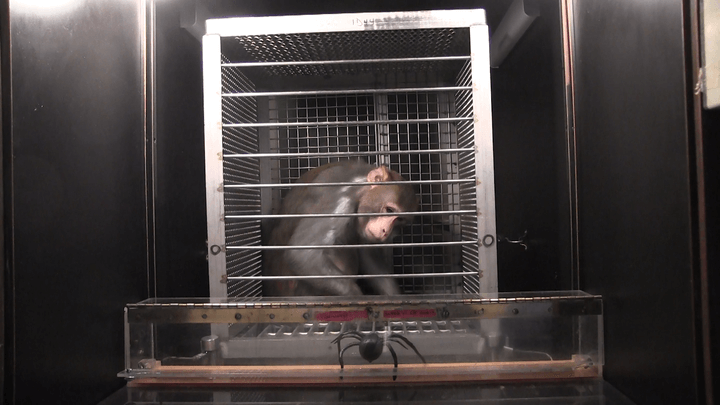 Wasted Resources and Funds Amid a Pandemic Are Disturbing

Cromwell, who’s proved himself to be someone who’s never afraid to speak up for what’s right, boldly points out, “Across the country, we’re losing loved ones to a pandemic—a vaccine and effective treatments are desperately needed.” He then asks the question that’s on everyone’s mind: “[A]nd this is how NIH funnels its money?”

NIH is supposed to be our country’s premier medical agency, yet there seems to be no accountability. “Murray’s so-called ‘research’ has gone unchecked for 30 years. How many monkeys have died for her hideous pseudo-science? How many human lives could be saved if we stopped funding this madness?” Cromwell asks.

We’re Calling on NIH’s Own Employees to Take Action

Because these experiments are so grim, Cromwell concludes his message by encouraging agency staffers to call NIH Director Francis Collins directly and demand that he shut down Murray’s laboratory. The actor joins Bill Maher and Anjelica Huston—along with nearly 147,000 PETA supporters who’ve signed our petitions demanding that NIH end its cruel, useless, and wasteful experiments—in speaking out for these monkeys.