Update: Good news! We love James Cromwell even more than we already did because of his willingness to face arrest to help bring attention to cruel brain experiments on cats at the University of Wisconsin–Madison, and now we love that local prosecutors have declined to bring criminal disorderly conduct charges against him—as well as against the PETA staff member who was arrested with him—for pointing out that the experiments are unethical and must be stopped. The pair have instead been cited for noncriminal county ordinance violations—similar to a traffic ticket.

The USDA’s documentation confirms that pain was inflicted on cats—including Double Trouble—who suffered from chronic life-threatening infections after having holes drilled into their skulls and metal coils implanted in their eyes and being constantly starved to force them to obey commands. Please join James Cromwell today in urging the University of Wisconsin Board of Regents to stop these cruel and deadly experiments.

The following was originally posted on February 7, 2013:

Members of the University of Wisconsin (UW) System Board of Regents sat stunned as actor James Cromwell entered their meeting to challenge them over experiments on cats. Likely the last thing the board expected today was to have an Academy Award nominee rush in, holding a grisly picture of a cat with a large metal post protruding from her head, and exclaim, “This is not science! This is torture! Shame on you!” But James, a longtime PETA supporter, felt that it was high time the board got personally called out for UW-Madison’s abuse of cats. Campus police arrested him and a PETA staff member but not before the board had to stare into the face of just one of the many cats who had been tormented and killed in UW-Madison’s disturbing brain and ear experiments.

The orange tabby cat whose image has become synonymous with the cruel cat laboratories is Double Trouble. Experimenters screwed a steel post to her skull so that they could immobilize her head and planted electrical devices deep inside her ears. They allowed her massive, bloody head wound to become severely infected, and they then starved her for days at a time so that she would cooperate with them in exchange for a morsel of food to eat. Finally, calling the experiment a failure, they killed and decapitated her. 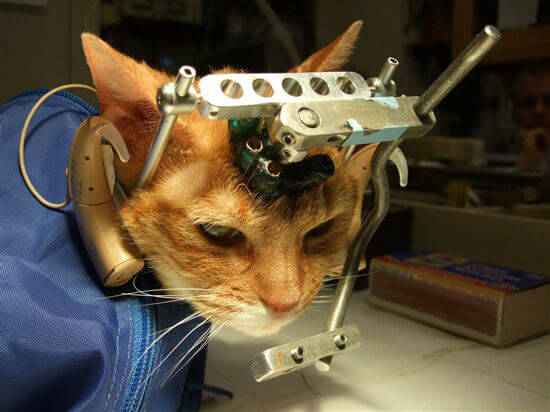 PETA has repeatedly asked UW-Madison to end its abusive experiments on cats but has received no response. Please e-mail UW’s Board of Regents and urge the members to listen to James and the hundreds of thousands of other compassionate people who want the school to end these cruel cat laboratories and switch to modern, superior, non-animal research methods.