Who ‘Veganuary’ Is Really About: Animals

Who: You ☺️
What: “Veganuary” for animals
When: January and beyond ♾️
Where: Everywhere
Why: Animals
How: With PETA’s help, of course! ℹ️

If you need a reason to celebrate “Veganuary,” we’ve got the one that matters most: animals. January 1 signifies new beginnings—it’s a time for us all to reflect on the past year and commit to making new, positive changes going forward. If you’ve yet to go vegan, participating in Veganuary for animals is a great way to kick off 2023, and we’re here to help! Get to know a few of the animals you’ll be helping to save by going vegan—their quirks, behavior, and preferences (the traits that make them uniquely them)—and discover how easy it can be to swap flesh, congealed cow secretions, and cholesterol bombs for plant-based deliciousness.

Pigs’ love language is words of affirmation—that’s because these smart, curious animals are social and family-oriented, too. Mother pigs sing to their babies while nursing, and many pigs enjoy sunbathing, listening to music, and cuddling (although each one is unique, and some prefer their space)—but these options aren’t available to pigs who are raised and killed for food. But we do have options, and the only non-speciesist one is to leave bacon, pork, and other pig flesh off our plates. 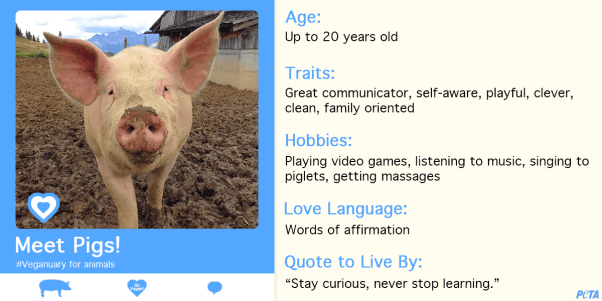 Vegan Bacon Is the Real Deal—Take a Look

When it comes to pain and suffering, fish feel it all. And they’re remarkably intelligent—fish have impressive long-term memories and sophisticated social structures. Many talk to one another using squeaks, squeals, and other low-frequency sounds as well as “sign language” or “Morse code.” Some enjoy physical contact with other fish and often gently rub against one another, in the same way a dog might snuggle up next to you on the couch. Marine biologist Dr. Sylvia Earle put it best: “I wouldn’t deliberately eat a grouper any more than I’d eat a cocker spaniel.” Luckily for her and all other non-speciesists, there are tons of vegan seafood products available online and in grocery stores across the country (with more undoubtedly on the way in 2023). 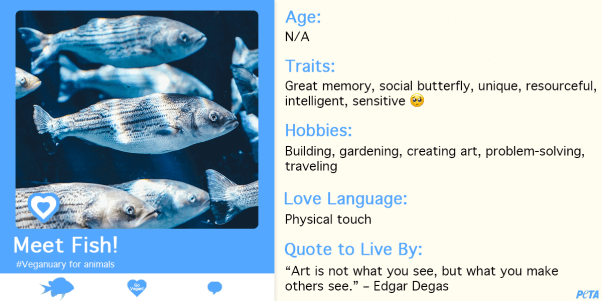 Opt for Seafood Without the Suffering

Mother cows cry out for their babies when they’re torn away from them mere hours or days after birth, which is the only reason anyone should need to ditch cheese, yogurt, ice cream, and other dairy “products.” (Mother cows have been known to escape and travel for miles to reunite with their babies after dairy workers separate them.) And cows who are eventually killed for food—animals who develop friendships over time and mourn the deaths of those they love—don’t deserve to be branded; forced to exist on feedlots where the air is saturated with ammonia, methane, and other noxious chemicals; or trucked to a slaughterhouse, where “they die piece by piece.” So instead of tearing families apart and signing these gentle giants’ death warrants, this Veganuary and every single month after it, opt for pus-free vegan dairy options and cow-free beef instead. Brands such as Violife, Miyoko’s Creamery, Kite Hill, Follow Your Heart, Beyond Meat, and MorningStar Farms make it easy and delicious. 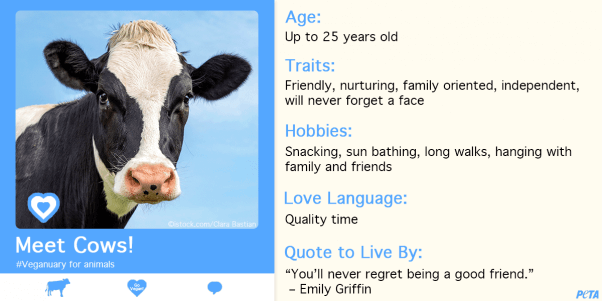 Everything You Need to Know About Vegan Cheese

Go Vegan Because Chickens Aren’t Ours to Eat

Veganuary is a great excuse to begin leaving the most abused animals on the planet—chickens—off your plate. They’re curious animals who care about their families, demonstrate self-control, and worry about the future. Mother chickens love their babies, even before they hatch—hens have been known to cluck softly to their chicks while sitting on the eggs, and the babies chirp back to their mother and to each other from inside the shells. (This happens when hens aren’t used for eggs—because regardless of “cage-free,” “pasture raised,” or “organic” labels, hens used for eggs are eventually killed and male chicks are ground up alive.) All these traits are reminiscent of humans and other animals, and they demonstrate that chickens are not here for us to eat. And in the era of KFC Beyond Fried Chicken, Panda Express Beyond the Original Orange Chicken, and too many freezer-aisle vegan chicken wing options to count, it’s no inconvenience to leave them in peace. 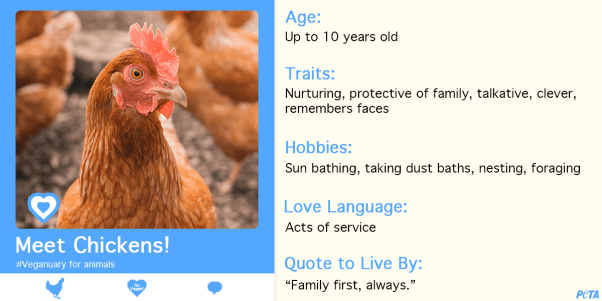 If you knew just how remarkable turkeys are or about the pain and suffering behind each bird corpse or piece of flesh sold, you’d surely stick to Tofurky. Turkeys relish having their feathers stroked and like to chirp, cluck, and gobble along to their favorite tunes. People who care for them at sanctuaries call them “natural detectives” because they’re curious, they always check out new sights and smells, and they enjoy greeting visitors. And mother turkeys, like so many other mothers, are fiercely protective—baby turkeys stay with their mothers for up to the first five months of their lives (when not reared and killed for food), and in nature, mother turkeys courageously defend their family against predators. These amazing birds don’t deserve our consideration only during January or when being pardoned at Thanksgiving—they deserve to be left in peace always. 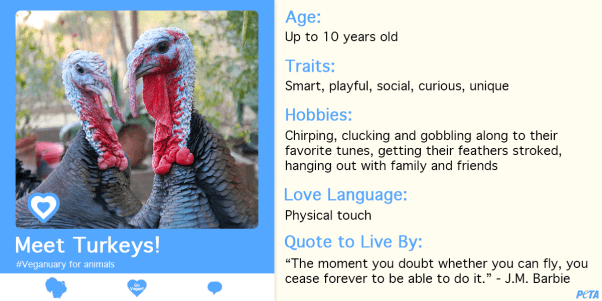 The animals above are remarkable—they’re unique individuals who love their babies, have keen memories, enjoy music, and are as varied in personality as the dogs and cats many of us share our homes and hearts with. They’re just as deserving of compassion and consideration as Fido, Lassie, you, or me—so show them the respect they deserve always and in all ways. Going vegan for one month will save the lives of about 16 animals—but going vegan forever means saving nearly 200 animals per year, every year. Talk about something to celebrate! 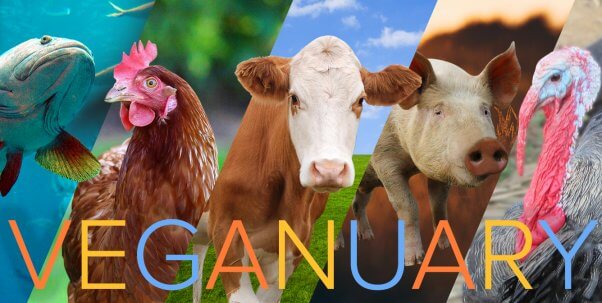 So order yourself a free vegan starter kit and click below for a Veganuary cheat sheet that’ll make your first month as a vegan easy as plant-based pie:

How to Have the Most Successful Veganuary Ever