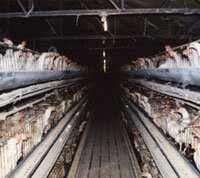 The more than 300 million chickens used each year for their eggs endure a nightmare that lasts for two years.

Hens in egg factories have a large portion of their beaks cut off with a burning-hot blade within hours or days of birth. No painkillers are used. Birds are in pain both during and after the procedure. Chicks, who often have a hard time eating and drinking after their beaks are mutilated, can suffer from hunger and dehydration because their food and water intake is greatly reduced for several weeks after the procedure.

Hens are then shoved into tiny wire “battery” cages, which measure roughly 18 inches by 24 inches and hold up to 10 hens, each of whom has a wingspan up to 36 inches. Even in the best-case scenario, a hen spends her life crowded in a space about the size of a file drawer with several other hens, unable to lift a single wing.

The birds are crammed so closely together that although normally clean animals, they are forced to urinate and defecate on one another. The stench of ammonia and feces hangs heavy in the air, and disease runs rampant in the filthy, cramped sheds. Many birds die, and survivors are often forced to live with their dead and dying cagemates, who are sometimes left to rot.

The light in the sheds is constantly manipulated to maximize egg production. For two weeks at a time, the hens are fed only reduced-calorie feed. This process induces an extra laying cycle.

Male chicks are worthless to the egg industry, so every year, millions of them are suffocated or thrown into high-speed grinders, called “macerators,” while they are still alive.

After about two years in these conditions, the hens’ bodies are exhausted, and their egg production drops. These “spent” hens are shipped to slaughterhouses, where their fragile legs are forced into shackles and their throats are cut. By the time they are sent to slaughter, roughly 30 percent of them are suffering from broken bones resulting from neglect, osteoporosis, and rough treatment. Their emaciated bodies are so damaged that their flesh can generally be used only for companion-animal food, but some of this meat has been used in the National School Lunch Program.

The good news is that cutting eggs from your diet is easy. Today, there are many delicious and humane egg-free options. Check out a list of our favorite egg-free alternatives and recipes.