Only female chicks have the potential to lay eggs—which means that in the egg industry, male chicks are considered “useless” and are killed to keep profits high. (Yes, even on organic farms—even on those selling eggs with “free-range” or “cage-free” labels.) But profitability doesn’t mean anything to these chicks, who didn’t want to be shredded:

These male chicks, who were probably just a day old, didn’t want to be ground up while still alive in a high-speed industrial grinder, either:

And these chicks—who will never know sunlight or their family members or what a pecking order is—surely didn’t want to spend their final moments being torn apart in a grinding machine, all because humans eat eggs:

On Tuesday, Didier Guillaume—France’s minister of agriculture—announced that the heinous practice of shredding male chicks will be banned in the country by the end of 2021. He also said that France will ban the practice of castrating male piglets without anesthetic, another cruel but extremely common occurrence on farms that raise and kill pigs for food. 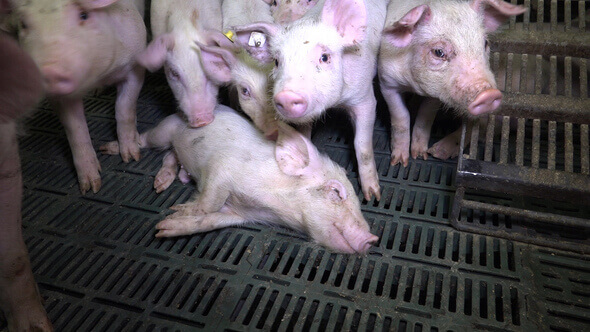 With these bans, male piglets will no longer be castrated without painkillers and millions of male chicks will be spared the horror of being killed in high-speed grinders, ending two of animal agriculture’s many cruel practices—in France alone. Gassing, shredding, and suffocating are still common ways of killing male chicks worldwide. Here in the U.S. and in many other countries, these are accepted industry practices, as is castrating piglets sans anesthetic. And these bans do nothing to help the sisters of male chicks or piglets.

Female chickens will continue to endure a hideous fate as long as people eat eggs.

Intelligent, curious, and easily frightened hens are commonly kept in extremely crowded and filthy conditions and are often painfully mutilated when the ends of their sensitive beaks are cut off. They, too, are slaughtered, when deemed no longer fit for egg production. Shoved into small crates—sometimes sustaining broken wings or legs—they endure a harrowing journey to the slaughterhouse, where their throats are cut, often while they’re still conscious.

Female piglets used for food will continue to endure the same miserable fate as their mothers.

Female pigs used as breeders by the meat industry usually spend most of their lives confined to metal-barred gestation crates that are so cramped, they can barely move. They’re repeatedly impregnated and forced to bear an average of 23 piglets per year. The babies are taken away from them just a few weeks after birth and then fattened to be slaughtered or used to replace pigs whose bodies have become worn out. Those who doesn’t die on farms are crammed one on top of the other into transport trucks and hauled to the slaughterhouse. After a lifetime spent carrying and birthing babies, they’re hung upside down, their throats are slit, and they’re scalded in boiling-hot water in order to remove their hair.

The best way to help chicks and piglets is to make the ethical decision to stop eating their eggs and flesh altogether and switch to vegan foods.

PETA is here to help make the vegan transition easy! Click on the link below to learn how easy it is to save nearly 200 animals a year: