Can you feel the boom—or rather bloom—of vegan fast food in 2022? Plant your feet, because plants are shaking up your usual shake-and-burger spots after an encouraging year. Gearing up as demand grows for animal-free and planet-friendly platters, some of the biggest chains have tested vegan items and added plant-based innovations. Many menus are reflecting this wider respect for animals and the environment, making it increasingly easy to order a quick vegan meal. In case you didn’t catch these scrumptious options on your last jaunt to a favorite joint or loop around the drive-through, take a spin with PETA as we review speedy vegan nosh news from around the nation. 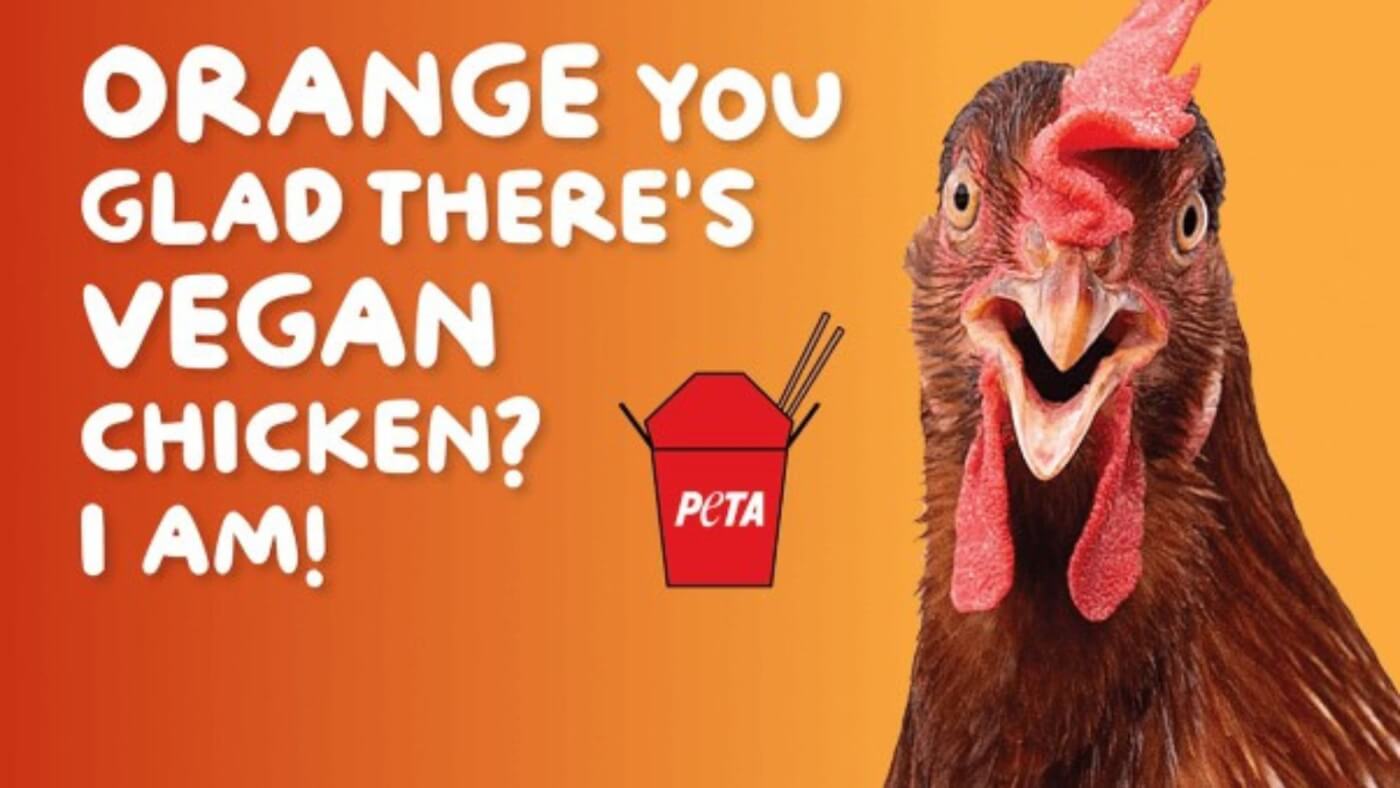 Panda Express Offers ‘Beyond the Original Orange Chicken’ at Over 2,300 Locations

After teaming up with Beyond Meat—PETA’s 2013 Company of the Year—and testing out this top-selling, tasty option in New York City and Los Angeles, Panda Express officially added Beyond the Original Orange Chicken to its menu in 2022, paving the way for kinder options across the country. This delicious dish comes after PETA supporters took more than 234,000 actions to encourage the chain to add vegan options.

Panda Express’ 2,300 locations nationwide now offer this meal, which features crispy breading and honey-free sauce. This mouthwatering vegan choice will help customers stop contributing to cruelty toward sensitive, social chickens used for food. Other vegan delights from Panda Express include Eggplant Tofu, Vegetable Spring Rolls, Chow Mein, and Super Greens. PETA has been pushing the chain since 2008 to add first vegetarian, then vegan options, including urging it to remove chicken stock from recipes, so this news is a triumph!

McDonald’s tested the McPlant Burger at many select stores in California and Texas, largely in the San Francisco and Dallas areas. As long as the mayonnaise and cheese were left off, the burger was vegan. Co-developed with Beyond Meat, the McPlant featured a cow-friendly patty, onions, lettuce, pickles, Roma tomatoes, ketchup, mustard, and a toasted sesame seed bun.

So far, over 37,500 PETA supporters have taken action to get a vegan burger onto all the chain’s American menus, and we’ve been writing to McDonald’s about expanding vegan food options since 2014. With any luck, our decades of campaigning will also help inspire the chain to reboot the McPlant or another similar option across the U.S. in 2023, especially since McDonald’s restaurants in the Netherlands, Portugal, the U.K., and other countries already have permanent vegan items.

In October, Taco Bell began testing its new Beyond Carne Asada Steak at nearly 50 locations in the Dayton, Ohio, area. Just before that, a limited run of plant-based beef—a special blend of soy and pea protein—was tested in about 50 locations in the Birmingham, Alabama, area.

PETA has pushed the chain since 2013 to add vegan items, including asking it to make the Doritos Spicy Sweet Chili taco shell animal-free. We specifically urged Taco Bell to add Beyond vegan meat in 2020. Here’s hoping our efforts will help these flavorful flourishes from Taco Bell land in all U.S. stores in 2023, for the sake of cows everywhere.

Burger King tested a meat-free Original Chik’n Sandwich in Cincinnati, along with chicken-free nuggets in select cities, both in the fall of 2022. We hope they join the plant-based Whopper as mainstays—the burger can easily be made animal-friendly by ordering it without mayonnaise. PETA has been pushing the chain to add vegan options in the U.S. since 2004, and we’ll keep at it.

And across the pond in the U.K. on World Vegan Day in 2022, Burger King began testing new soy-based Dirty Vegan Nuggets—via a collaboration with The Vegetarian Butcher—topped with barbecue sauce and crispy onions. This test follows the successful launch of a Vegan Royale and a Plant-Based Whopper, plus a monthlong all-vegan menu trial at Burger King’s flagship London location, with support from PETA U.K. Maybe these latest innovations will arrive nationwide in the U.S. soon, giving customers more opportunities to be kind to inquisitive, observant chickens.

Chipotle Launched Vegan Chorizo Across the U.S., and We Hope It’ll Return to Stay

After the soy-based Sofritas option became a permanent vegan go-to, Chipotle capitalized on a chance in early January 2022 to launch a spicy vegan chorizo all over the U.S. Made fresh each day with pea protein and delicious seasonings, this gluten-free taste bud rouser packs twice the protein of the Sofritas.

PETA has pushed Chipotle to add vegan items since 2012, and the Sofritas and Plant-Based Chorizo followed years of pressure from and conversations with us. We even received a reply this year from the chain’s sustainability director highlighting its Vegan Lifestyle Bowl and saying, “We look forward to sharing continued innovation in this space.” PETA replied by suggesting that it keep adding more vegan options to help improve its corporate climate footprint. Next time you opt for Chipotle, give the Sofritas or—if still available—the Plant-Based Chorizo a try while taking time to understand why friendly, intelligent pigs should never be used for food.

A post shared by All life World Cup Commercial (@all_life_commercial)

In March, Peet’s Coffee released a plant-based Mediterranean Flatbread wrap that’s available all day at every location. Made with an egg-free scramble, vegan provolone cheese from Violife, tomatoes, pesto, kale, and bell peppers, this delectable wrap joins the Everything Plant-Based Sandwich—happily, a permanent menu item after being tested in 2021—as a great new option.

In 2021, PETA raised the idea with Peet’s to create an animal-free sandwich, including Beyond Sausage specifically, so we’re elated that it did. More customers can now consider how socially complex, curious chickens are used in the egg industry and make the compassionate choice instead. Peet’s also created more vegan drinks in 2022, available hot or iced, including the handcrafted Hazelnut Oat Latte, Vanilla Almond Latte, and Cold Brew with Vanilla Oat Foam.

New vegan shakes are now being offered at all 220 U.S. Smashburger locations, thanks to an exciting collaboration in June between the company and Eclipse Foods. Boasting flavors such as Tangerine Dream, Peanut Butter, Vanilla, Chocolate, and Strawberry, the creamy concoctions can help foster further compassion for cows used in the dairy industry and are bound to shake you up in all the best ways. Just ask for no whipped cream.

PETA has urged the chain over the years to add more vegan options, like an animal-friendly kids’ menu, so these shakes show someone heard us. And as vegan milkshakes keep popping up in various places, PETA suspects Smashburger may have an ongoing smash success with these.

Pret A Manger Continues to Promote Its Meatless Meatball Wrap in the U.S.

Via a partnership with the U.K.-based Meatless Farm, Pret A Manger brought its new Meatless Meatball Wrap to the U.S. in January 2022, landing in all 42 locations in New York City, Philadelphia, and Washington, D.C. The plant-based meatballs infused with garlic and herbs are nestled in a seven-grain wrap with red onions, red pepper, marinara sauce, and a dash of crispy onions. Joining the Creamy Oatm*lk Porridge as another vegan option, the wrap represents the first time Pret A Manger’s menu has included animal-free meat.

PETA’s pushed Pret in the U.S. to add more vegan items since 2017—to match the many options available at Pret in the U.K., which PETA U.K. has been urging the chain to add since 2012. In the U.S., PETA repeatedly asked the chain to drop its vegan milk surcharge in 2018, and it did in 2020. We thank it for that commitment, and we’re in communication via updates on the newest vegan items (like the Meatless Meatball Wrap and the Roasted Veggie Harvest Soup released this year).

A post shared by Pret A Manger USA (@pretusa)

Starbucks Started Autumn Off Well With a Daring Chicken Test Around D.C.

Starbucks may still be hypocritical about vegan milk surcharges—and PETA will keep campaigning to change that—but it was refreshing to see the chain team up with the celebrity-backed, plant-based brand Daring Foods starting in October. Customers in the D.C. area have gotten to taste new sous vide egg-free bites and vegan chicken options, including the Plant-Based Spicy Chicken Sausage and Pepper Sous-Vide Bite, the Plant-Based Smoky Poblano and Black Bean Sous-Vide Bite, and the Plant-Based Spicy Chicken Sausage and Pepper Sandwich Mini. Perhaps these morning noshes will sweep the nation soon.

We’ve pushed the popular coffee shop over the years to add vegan options, and it’s tested quite a few. At the end of 2021, Starbucks U.K. announced that it would quit charging extra for plant-based milks at the outset of 2022, following PETA U.K.’s involvement with the chain since 2012. We hope Starbucks in the U.S. will soon follow suit. As far back as 2007, PETA began purchasing shares of Starbucks stock to have more sway with the chain. In early 2022, it said it would launch ready-to-drink Frappuccinos with oat milk in Caramel Waffle Cookie and Dark Chocolate Brownie flavors. It’s also releasing a bottled cold brew with oat milk in a dark chocolate flavor. 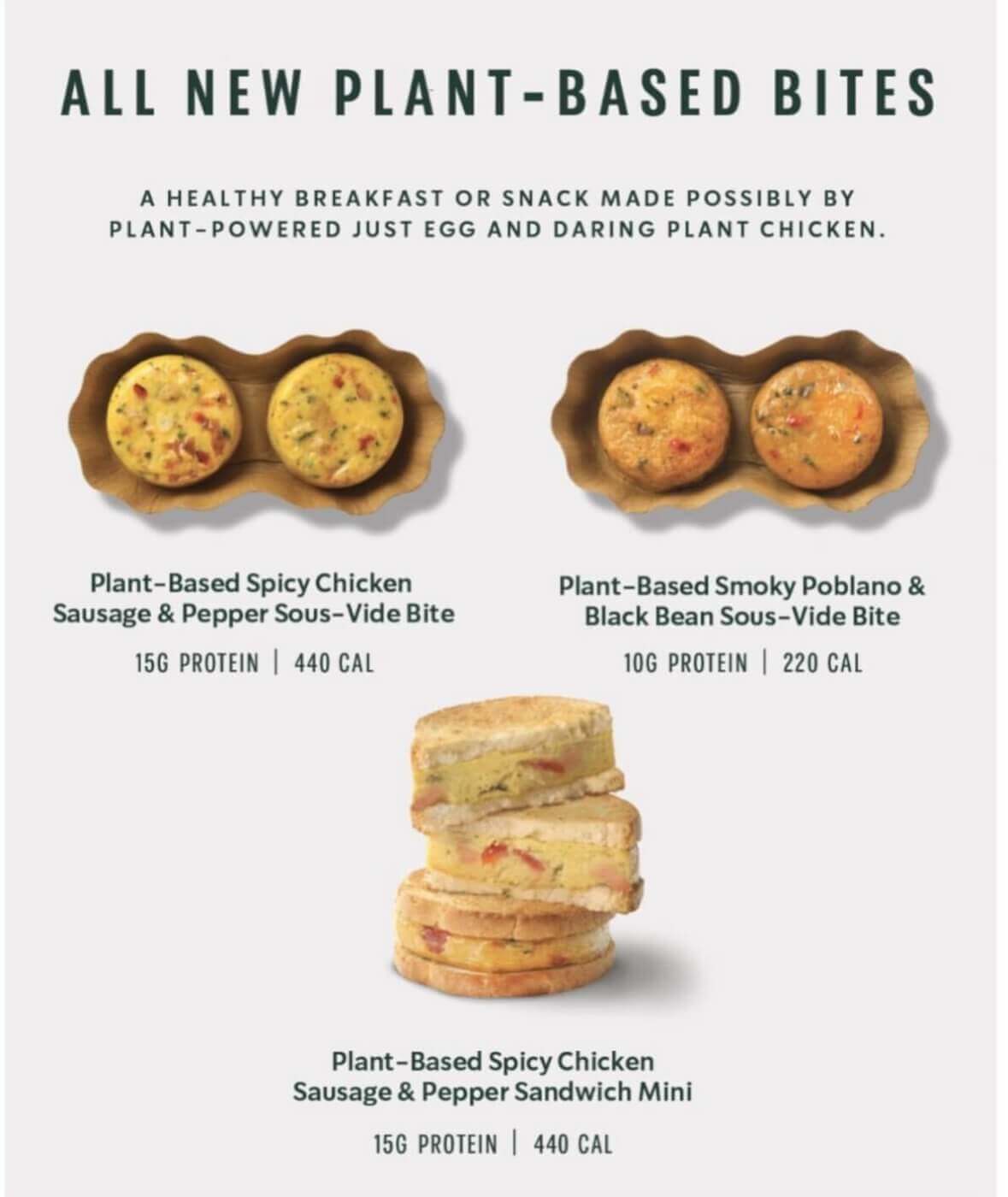 As plant-based milkshakes keep appearing at other chains, Mel’s Drive-In made the move and stirred up its own by partnering with Eclipse Foods in 2022. The two newest animal-friendly shakes are Vegan Chocolate Chip and Vegan Cookies’n’Cream, both made with Cosmic Bliss ice cream and almond milk and the latter with Lenny and Larry’s Chocolate Chip Complete Cookie.

Customers can also request vegan versions of Mel’s standard shakes with Cosmic Bliss ice cream. With favorite flavors like vanilla, chocolate, and strawberry and the option to add pineapple, cookies, butterscotch, banana, or coffee for only 20 cents more, the classic shakes can all be ordered animal-free. Pair any of them with a meat-free burger and you’ll be set.

Here are a few more tasty vegan options that have cropped up and been tested over the past year:

PETA encourages you to keep looking for new developments along these lines as we move into the new year—hopefully, 2023 will prove to be a plant-based bonanza for fast-food chains everywhere. Meanwhile, take a moment to encourage more chains to offer vegan choices and send a friend our free vegan starter kit to help them make every meal in the coming year a compassionate one: