Restaurant Chains That Won’t Give the U.S. the Vegan Goods

Isn’t it so annoying when restaurants don’t eagerly hop on the vegan bandwagon? Yes. But I’ll tell you what’s even more annoying: when they are hopping on it in other countries but not in the U.S.! Why? What gives? Are we not vegan enough for them? Did we offend them with our desire to have a healthy, sustainable, and ethical lifestyle? What is it?

The seven restaurant chains below have a lot of explaining to do. Except not. We just want them to update their menus across the U.S. with the vegan goods. See which ones are doing us dirty, and click on the links to take action while you’re at it.

Pizza Hut has proudly served dairy-free cheese to its U.K. customers for years, and now it’s offering Violife shreds on pizzas in Germany, too. The chain launched a Creamy Cheez Pasta along with three new pizzas, which are all vegan as is: the Smokey BBQ Vegan, Vegan Chik ’n’ Cheez, and Tuscany Spicy Vegan. The changes to the menu came after a PETA Germany petition pushed the chain to offer more animal-friendly options. Meanwhile, Pizza Hut in the U.S. has had successful tests of Beyond Meat Italian Sausage Crumbles and Beyond Meat Pepperoni but has yet to launch the offerings nationwide (or with vegan cheese). The Hut needs to get with the times and give us what we want: hot, cheesy vegan pizza delivered to our door by someone wearing a cool hat and a warm smile.

Now, Starbucks customers in France don’t have to pay an extra charge for vegan milk! The chain dropped its surcharge for soy, oat, coconut, and almond milk at all its locations across the country. And Starbucks France isn’t the first to make this major move—in January 2022, U.K. Starbucks stores (which have long offered free soy milk) also dropped the chain’s infamous extra charge for almond, oat, and coconut milk. This is great news for our friends across the pond (and for cows and the planet), but for those of us still paying extra to add milk options with the lowest carbon footprint to our lattes—as well as for the climate catastrophe and the hundreds of millions of cows used, abused, and eventually killed for dairy around the world—these announcements feel like a bit of a slight.

According to the Daily Mail, U.K. Starbucks stores—where a BBQ Vegan Wrap with Jackfruit and Slaw is already available—will offer a new fish-free Tu’NAH sandwich, too. Some European countries even get a vegan Pumpkin Spice Latte! So why not the U.S.? We like vegan food just as much as people with accents do. And while you’re at it, Starbucks, what’s a country gotta do to get some vegan cream cheese?

For the Planet and All Its Inhabitants, Urge Starbucks to Do Better

Popeyes is coming to the U.K., and it’s offering a vegan burger at its London location. The red bean–based vegan patty is fried and topped with lettuce, tomato, and a creamy vegan Creole sauce made with onion, garlic, peppers, tomato, and parsley. So why is Popeyes holding out on animal-friendly options in the U.S.? Since the chain is known for its fried chicken, we’d love to see it add a vegan chicken option to its U.S. menu. We’re waiting—and in the meantime, we’ll be buying plant-based chicken sandwiches that no one had to die for. 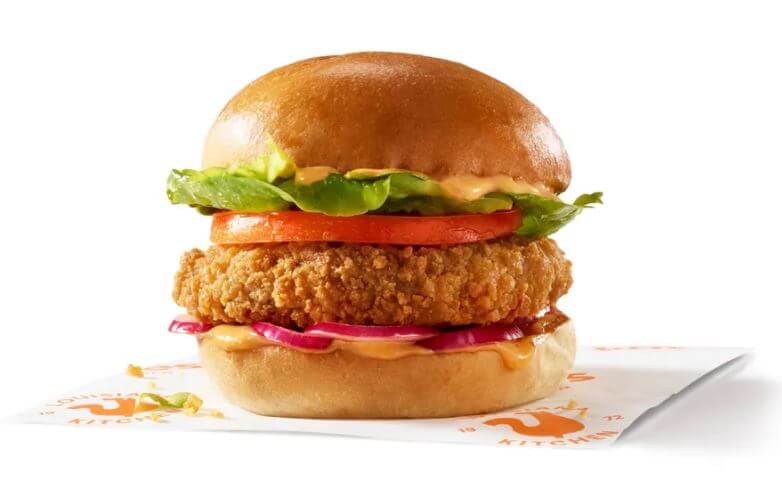 On October 13, McDonald’s locations in the U.K. and Ireland will begin testing the McPlant burger, which features a Beyond Meat patty, a vegan sesame bun, vegan sauce, and bespoke vegan cheese. The chain already offers a vegan burger in Germany, Hong Kong, Norway, Saudi Arabia, South Africa, and Sweden and has tested ones in Canada and Finland, and it features its vegan McAloo Tikki burger in India. In addition, Norway gets vegan nuggets in its Happy Meals. All the fries are vegan in these places, too! But then there’s the U.S.—crickets. Come on, McDonald’s—just roll out a permanent vegan burger in all U.S. locations already! We’re waiting. And make the fries here vegan, too, will ya?

Burger King offers several vegan options at various locations worldwide, including on menus in South Africa, where it serves the Plant-Based Whopper, Vegan Royale (a vegan chicken sandwich), and Vegan Nuggets. Burger King Germany, in partnership with Dutch brand The Vegetarian Butcher, even opened a temporary all-vegan location in Cologne, Germany, which served everything from vegan Whoppers with Hellmann’s vegan mayonnaise to Ben & Jerry’s nondairy ice cream. The chain serves other animal-friendly options, including vegan chicken nuggets, at all of its locations across the country. We think that Burger King should offer these options stateside, especially since vegan chicken is gaining popularity in the fast-food market following KFC’s Beyond Chicken test. Your move, Burger King.

In the U.S., KFC stands for one thing: Kentucky Fried Cruelty. But in Canada, Germany, and the U.K., the fast-food chain offers vegan-friendly fried chicken sandwiches at select locations. It’s even serving Oatly’s vegan ice cream in restaurants across China. KFC, we get it—these are exciting places. But the U.S. is pretty great, too, and we have just as many hangry vegans as they do. KFC Germany has started testing its new Kentucky Fried Vegan Burger in Berlin, and after pressure from thousands of PETA U.K. supporters, KFC in the U.K. released a vegan chicken sandwich, complete with the chain’s famous Original Recipe herbs and spices and topped with vegan mayo. (Vegan mayo, you guys!) If you’re in any of these places, show some support and get yourself a delicious chicken-free sandwich. Meanwhile, we’ll be anxiously awaiting these plant-based options in the U.S. 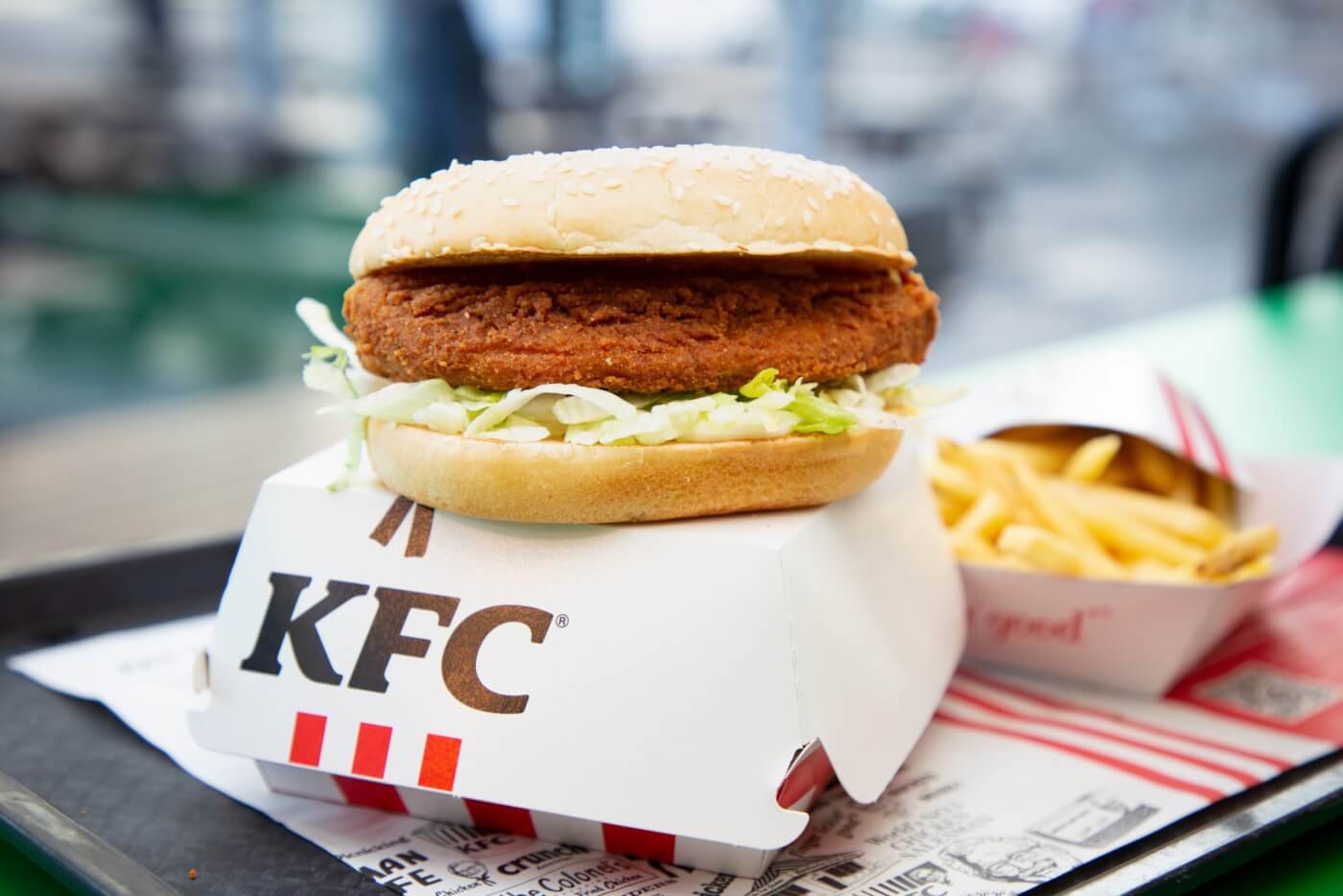 In the U.S., this coffee and doughnut chain offers some great vegan options, including a Beyond Meat breakfast sandwich and oat milk lattes. While we’re still anxiously awaiting vegan doughnut options here, we’re happy to see that Dunkin’ is debuting a huge vegan menu at its stores in Belgium and the Netherlands. An impressive menu of over 40 vegan doughnuts is making its way to these locations in Europe, with fun flavors like Strawberry & Crème, Chocolate Chip, and Confetti. We can’t wait until some of these flavors make their way across the Atlantic. Until then, you can enjoy Dunkin’s other vegan options and grab a vegan doughnut at other shops across the country.

Krispy Kreme launched a vegan version of its original glazed doughnuts in the U.K. to celebrate “Veganuary.” These delicious sweet treats can be ordered by the dozen for nationwide delivery in the U.K. We’re looking forward to the day when U.S. locations do the same. In the meantime, you can get your vegan doughnut fix at plenty of other places.

Taco Bell is leaving the U.S. high and dry while it indulges other parts of the world with its innovative vegan options. The company is treating its fans in China to an item that it’s dubbed the OmniPork Crunchy Taco, which features vegan ground pork. Meanwhile, in parts of Europe, including Spain and Finland, the chain is serving up the Oatrageous Taco, filled with vegan meat made from oats and marinated beans. While we love Taco Bell’s vegan-friendly menu in the U.S., we’d love it even more if the company satisfied Americans’ cravings for tasty vegan meats.

Domino’s Australia offers dairy-free cheese at over 600 locations Down Unda. What makes this so painful for Americans is that it’s Follow Your Heart vegan cheese—one of our FAVORITE vegan options! Does that sound fair to you? Narr! We’re sick of drooling, and the amount of fluid we’re losing is just not sustainable. 🤤 Domino’s, we need you to get it together in the U.S., and we will talk in a fake Aussie accent about koala bears and dingoes just to get your attention if we have to.

The Australian chain Hungry Jack’s, which is essentially Burger King, offers a vegan cheeseburger complete with a “[d]ouble vegan patty (made from corn, capsicum and carrot), vegan cheese and vegan mayonnaise with tomato sauce, onions, fresh tomato and crisp lettuce on a delicious seeded bun.” W … TF. We want that. Burger King doesn’t even offer a vegan patty in the U.S., let alone vegan mayo and cheese. As consumers, we are indignant.

📢 Attention, all restaurants hooking up Australia, Canada, China, South Africa, and several countries in Europe with vegan food while dissing the U.S.: We want to give you our money! It’s burning a hole in our pockets—but nothing burns more than these games you’re playing with our hearts. Will you quit making us jelly and just sell us the vegan food we so desperately want to buy? Please and thank you.