Chickens are arguably the most abused animals on the planet. In the United States, approximately 9 billion chickens are killed for their flesh each year, and 305 million hens are used for their eggs. The vast majority of these animals spend their lives in total confinement—from the moment they hatch until the day they are killed.

More chickens are raised and killed for food than all other land animals combined, yet not a single federal law protects them from abuse—even though most Americans say that they would support such a law. 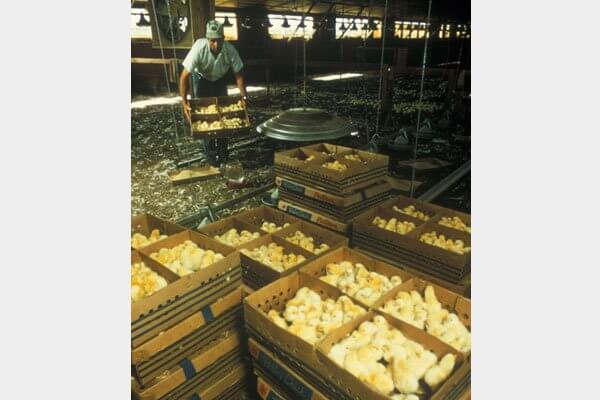 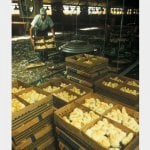 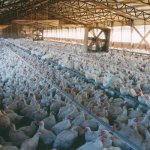 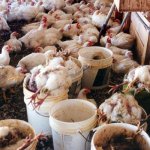 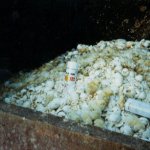 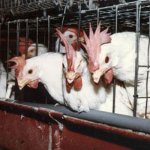 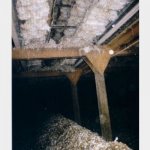 Chickens are inquisitive, interesting animals who are as intelligent as mammals such as cats, dogs, and even some primates. They are very social and like to spend their days together, scratching for food, taking dust baths, roosting in trees, and lying in the sun.

But chickens raised on factory farms each year in the U.S. never have the chance to do anything that’s natural or important to them. A baby chick on a factory farm will never be allowed contact with his or her parents, let alone be raised by them. These chickens are deprived of the chance to take dust baths, feel the warmth of the sun on their backs, breathe fresh air, roost in trees, and build nests.

Chickens raised for their flesh, called “broilers” by the chicken industry, spend their entire lives in filthy sheds with tens of thousands of other birds, where intense crowding and confinement lead to outbreaks of disease. They’re bred and drugged to grow so large so quickly that their legs and organs can’t keep up, making heart attacks, organ failure, and crippling leg deformities common. Many become crippled under their own weight and eventually die because they can’t reach the water nozzles. When they are only 6 or 7 weeks old, they’re crammed into cages and trucked to slaughter.

Birds exploited for their eggs, called “laying hens” by the industry, are crammed together inside wire cages where they don’t even have enough room to spread their wings. Because the hens are crammed so closely together, these normally clean animals are forced to urinate and defecate on one another. The birds have part of their sensitive beaks cut off so that they won’t peck each other out of frustration created by the unnatural confinement. After their bodies are exhausted and their egg production drops, they are shipped to slaughter, generally to be turned into chicken soup or cat or dog food because their flesh is too bruised and battered to be used for much else.

Because the male chicks of egg-laying breeder hens are unable to lay eggs and are not bred to produce excessive flesh for the meat industry, they are killed. Every year, 200 million of these young birds are ground up alive or tossed into bags to suffocate.

Chickens are slammed into small crates and trucked to the slaughterhouse through all weather extremes. Hundreds of millions sustain broken wings and legs from rough handling, and millions die from the stress of the journey.

At the slaughterhouse, their legs are forced into shackles, their throats are cut, and they’re immersed in scalding-hot water to remove their feathers. Because they have no federal legal protection (birds are exempt from the Humane Slaughter Act), almost all chickens are still conscious when their throats are cut, and many are literally scalded to death in the feather-removal tanks after missing the throat cutter.

You can help end this cruelty. Order PETA’s free vegan starter kit, and we’ll send you tips and recipes to help you remove chickens and other animals from your diet today.