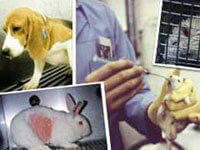 PETA entities worldwide, some of which work together as the PETA International Science Consortium Ltd., push international organizations, government agencies, and industries to reduce or ban animal experiments and replace them with modern, sophisticated non-animal test methods. One way in which PETA’s efforts have had global reach is through its work with the International Council on Animal Protection in OECD Programmes (ICAPO), an advisory group to the Organisation for Economic Co-operation and Development (OECD).  ICAPO’s efforts to integrate non-animal test methods into OECD test guidelines and programs have resulted in successes that have curtailed animal experimentation in many of the 34 OECD-member countries, sparing the lives of potentially millions of animals.

Read on to see the progress that PETA entities have made around the globe.

Some rights for animals have been granted under the German and Swiss constitutions, and Europe has banned the sale of animal-tested cosmetics products. In addition, a Europe-wide directive requires the use of non-animal methods where they exist. With all this, it might seem as though animals in European laboratories were better off than those in the U.S. and elsewhere. But scratch the surface and you will see that the situation is more complicated than that.

PETA India works to replace animals in medical and veterinary training, product testing, and government-funded laboratories. As a result of PETA India’s efforts, the Pharmacy Council of India now recommends the use of superior non-animal tools in labs and examinations, and the Medical Council of India removed the requirement for animal use in training. The removal of this requirement will make it possible to replace the use of animals in medical school curricula with sophisticated alternatives.

PETA India’s campaign to replace the use of animals in dissection with effective software led to a decision by the University Grants Commission, the Indian university system’s apex regulatory body, to advise all Indian universities to end dissection at the undergraduate level.

PETA India continues to work with government officials to bring India in line with internationally accepted testing methods. This effort got a boost in March 2011 when India was invited to become a member of the OECD, enabling PETA India to participate in ICAPO. Animal testing is reduced, refined, and replaced when OECD test guidelines are used, allowing member countries to accept tests without duplication, even when countries have varying regulatory requirements. Thanks to PETA India’s many meetings and discussions with government and other Indian officials, the Ministry of Health and Family Welfare permanently banned the testing of cosmetics and their ingredients on animals as well as the importation of animal-tested cosmetics and their ingredients.

PETA India has exposed dreadful conditions for animals in laboratories—including those at the All India Institute of Medical Sciences (AIIMS), where monkeys were kept isolated and confined to rusty, cramped cages for many years, in violation of Indian law. Following PETA India’s three-year campaign, AIIMS suspended all experiments on monkeys and sheep until improvements could be made and agreed to retire six monkeys immediately, rehabilitate others for retirement, and relocate the rest of the monkeys to a spacious enclosure where they would be able to live together and socialize.

Progress is being made to end the use of animals in laboratories. With your help, we can do even more. Get the facts and the information that you need to help animals here.