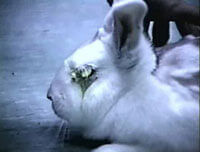 Rabbits are frequent victims of animal experimenters because they are mild-tempered and easy to handle, confine, and breed—more than 161,000 of them are abused in U.S. laboratories every year.

Despite the availability of more modern, humane, and effective alternatives, rabbits are still tormented in the notorious Draize eye irritancy test, in which substances such as personal care products, household cleaning products, and their ingredients are applied to their eyes often causing redness, swelling, discharge, ulceration, hemorrhaging, cloudiness, or blindness.

The rabbits are killed after the experiment is over. And even though internationally accepted non-animal methods exist, in skin corrosion tests, rabbits’ backs are shaved and corrosive chemicals are applied to their raw skin and left there for up to two weeks. These chemicals often burn the skin, leading to tissue damage. Rabbits are also given no pain relief during this excruciatingly painful test, and after the test is finished, they are killed.

At Professional Laboratory and Research Services, Inc., a product testing laboratory in North Carolina, workers attached thousands of ticks onto rabbits’ shaved bodies and allowed the insects to gorge for five days. Rabbits were subjected to this painful procedure twice and were then killed, even though non-animal methods for raising ticks have been available since the mid-’90s.

At the University of Pittsburgh, rabbits underwent a surgery designed to cause intentional trauma to their knee joints. After more than two weeks with their legs contorted in an unnatural, excruciating position, two of the animals had lost significant weight—indicating chronic pain and distress—but they were still forced to endure six more weeks of this agony.

Rabbits are also used in experiments to study cardiovascular disease, skin conditions, and spinal cord injuries. Experimenters at the University of Utah cut deep incisions into rabbits’ backs and surgically inserted implants into their spines. The surgically mutilated animals were observed for 24 weeks and then killed.

You can help stop this. Take a stand against animal testing. Sign PETA’s pledge to be cruelty-free, and only support companies and charities that do not fund or conduct cruel experiments on animals.