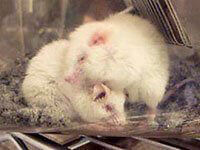 Regulatory agencies, such as the U.S. Food and Drug Administration (FDA), the U.S. Environmental Protection Agency (EPA), and other agencies around the world require companies to test chemicals, pesticides, pharmaceuticals, and other products before they are brought to market in order to predict their potential toxicity to humans or the environment.

Each year, millions of animals are used in these tests. Animals are forced to ingest or inhale or are injected with toxic substances before finally being killed and dissected. Most of these unreliable animal tests were developed many decades ago.

PETA started working on regulatory testing in 1998, holding negotiations with the White House and the EPA that greatly reduced the number of animals slated to be used in the agency’s high production volume (HPV) chemical-testing program—by the millions!

Since then, our team has grown and we’ve achieved many positive changes, just a fraction of which are included below:

This team of experts is leading the way in advancing non-animal approaches that meet federal and international testing requirements.

Amy Clippinger has a Ph.D. in cellular and molecular biology and genetics and several years of research experience at the University of Pennsylvania. She is the managing director of the Regulatory Toxicology Department.

Monita Sharma has a Ph.D. in biomedical sciences from Wright State University, with nanotoxicology as her main area of research.

Katherine Groff has an undergraduate degree in biology from the University of Notre Dame and a master’s degree in natural resource management, with a focus on environmental policy, from Michigan State University.

Gina Hilton has a Ph.D. in toxicology from North Carolina State University and a master’s degree in chemistry from Wake Forest University.

Anna van der Zalm has a master’s degree in chemistry from the University of Oxford.

Bridget Rogers has an M.S in global health from Duke University and has experience working in environmental regulation for the state of Louisiana.

April Naab has a master’s degree in chemical engineering from Montana State University and experience working in the pharmaceutical industry.

PETA’s Regulatory Toxicology Department works with researchers around the globe and has spared millions of animals deadly toxicity tests.