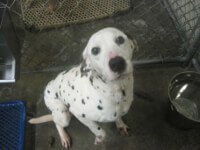 Update: In a landmark move, a North Carolina grand jury indicted four individuals who worked at PLRS, including a supervisor, on 14 felony cruelty-to-animals charges. This case marked the first time in U.S. history that laboratory workers faced felony cruelty charges for their abuse and neglect of animals in a laboratory. The first prosecution stemmed from PETA’s very first undercover investigation, the groundbreaking 1981 Silver Spring monkeys case.

For nine months, a PETA investigator worked undercover inside the filthy, deafeningly loud kennels of PLRS. Inconspicuously tucked away in rural North Carolina, PLRS took money from huge pharmaceutical companies to test insecticides and other chemicals used in companion-animal products. Bayer, Eli Lilly, Novartis, Schering-Plough (now Merck), Sergeant’s, Wellmark, and Merial, the maker of Frontline flea and tick products, are some of the corporations that have paid PLRS to force-feed experimental compounds to dogs and cats and smear chemicals onto the animals’ skin.

During this investigation, PETA’s investigator found that toxicity tests were just part of what the animals endured. Laboratory workers appeared to despise the animals in their care—they yelled and cursed at cowering dogs and cats, calling them “asshole,” “motherfuckers,” and “bitch”; used pressure hoses to spray water (as well as bleach and other harsh chemicals) on them; and dragged dogs who were too frightened to walk through the facility.

Video evidence shows that terrified cats were pulled from cages by the scruff of the neck while workers screamed in their faces and that a cat was viciously slammed into the metal door of a cage. One worker grabbed a cat and pushed him against a chain-link fence. When the cat fearfully clutched at the fencing with his claws, the worker jerked him off the fencing, saying that she hoped that the cat’s nails had been ripped out.

Dogs at PLRS spent years in cages, either to be used repeatedly in tests or to be kept infested with worms for some future study. They are just like the dogs we share our homes with, but they lived day in and day out without exercise or enrichment, companionship, a scratch behind the ears, or even a kind word from the only people they ever saw.

Many dogs had raw, oozing sores from being forced to live constantly on wet concrete, often in pools of their own urine and waste. Workers didn’t even move the dogs when they pressure-sprayed the runs, frightening the animals; soaking them with water, bleach, and soap; and exposing already painful sores to harsh, irritating chemicals.

PLRS didn’t bother to keep a veterinarian on staff. Instead, it chose to bring its primary veterinarian in for only one hour most weeks. Animals endured bloody feces, worm infestations, oozing sores, abscessed teeth, hematomas, and pus- and blood-filled infections without receiving adequate veterinary examinations and treatment. Sometimes, the conditions were ineffectively handled by workers who had no credentials or veterinary training.

After a supervisor gave one dog an anesthetic that was past its expiration date (and likely administered too little of it), the supervisor pulled out one of the animal’s teeth with a pair of pliers. The dog trembled and twitched in apparent pain, and the supervisor continued with the procedure despite the dog’s obvious reaction. Workers repeatedly cut into one dog’s tender, blood-filled ear, draining blood and pus but never treating the underlying cause of the dog’s suffering and apparently causing the ear to become infected.

Dogs were intentionally subjected to worm infestations for tests, but conditions were so sloppy that dogs who weren’t supposed to be part of the study also became infested and were then left untreated.

In one test commissioned by a corporation whose products are sold in grocery stores and drugstores nationwide, a chemical was applied to the necks of 57 cats. The cats immediately suffered seizures, foamed at the mouth, lost vision, and bled from their noses. Despite this, the substance was put on the cats a second time the very same day.

To cut costs, PLRS killed nearly 100 cats, rabbits, and dogs. The company had decided that some of these animals’ six daily cups of food were too expensive.

Federal oversight of horrendous facilities such as PLRS is virtually non-existent. In preparation for a U.S. Department of Agriculture (USDA) inspector’s annual visit, which PLRS staff knew to expect in June or July, PLRS employees painted over the rusty surfaces that the USDA had warned them about the previous year and reported that ailing animals had conditions that might merit veterinary care—which the facility’s attending veterinarian reportedly advised she would not provide—so that PLRS staff would be “covered” from blame should the inspector inquire about the animals’ condition. The inspector’s 2010 visit to PLRS, which housed approximately 400 animals at the time, lasted two hours and 15 minutes.

Just one week after PETA released the results of its shocking undercover investigation of PLRS and filed a complaint with the USDA—which resulted in citations against PLRS for dozens of violations of federal animal welfare laws—the North Carolina–based contract animal testing facility surrendered nearly 200 dogs and more than 50 cats and shut its doors. This is a monumental victory and the second time in U.S. history that a laboratory has been forced to surrender animals and close under pressure on the heels of a PETA investigation and while facing a formal USDA investigation. The first time was PETA‘s landmark Silver Spring monkeys case.