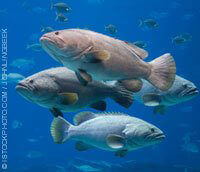 Billions of fish die every year in nets and on hooks. Some are destined for human consumption, many are tortured just for “sport,” and others are unintended victims who are maimed or killed simply because they were in the wrong place at the wrong time.

When fish are yanked from the water, they begin to suffocate. Their gills often collapse, and their swim bladders can rupture because of the sudden change in pressure. Numerous scientific reports from around the world confirm that fish feel pain. Researchers from the University of Edinburgh and University of Glasgow studied the pain receptors in fish and found that they were strikingly similar to those of mammals; the researchers concluded that “fish do have the capacity for pain perception and suffering.”

While the numbers continue to decline compared to decades ago, more than 29 million people still went fishing in 2006, spending billions of dollars on their “hobby.” According to a Florida State University study, sport fishers are responsible for killing almost 25 percent of overfished saltwater species. Many trout streams are so intensively fished that they require that all fish caught be released; the fish in these streams may spend their entire lives being repeatedly traumatized and injured.

Fish who are released after being caught can suffer from loss of their protective scale coating that makes them vunerable to disease, a dangerous build-up of lactic acid in their muscles, oxygen depletion, and damage to their delicate fins and mouths. According to one fishery expert, catch-and-release victims “could be vulnerable to predators, unable to swim away, or if nesting, not capable of fending off nest raiders. Some guarding males could in fact abandon the nest.” Researchers at the Oklahoma Department of Wildlife Conservation found that as many as 43 percent of fish released after being caught died within six days.

According to the National Oceanic and Atmospheric Administration, “[M]ore than one million birds and 100,000 marine mammals die each year due to ingestion of, and entanglement in marine debris.” The Florida Fish and Wildlife Conservation Commission reports that discarded monofilament fishing line is the number one killer of adult brown pelicans, although one Audubon biologist says that “[p]retty much every type of water or shore bird can get caught up in fishing line …. We find dead cormorants, anhingas, herons, egrets, roseate spoonbills … you name it.”

One out of every five manatee rescues conducted in the 1980s and 1990s was related to fishing-line entanglement, and during a four-year span, at least 35 dolphins died from injuries that they sustained as a result of being tangled in fishing line.

Eating Fish Is Hazardous to Your Health

Like other animals’ flesh, the flesh of sea animals contains high amounts of fat and cholesterol. “Seafood” is one of the most common causes of food poisoning in the U.S., and almost 7 million Americans are believed to be allergic to it.

Fish flesh (including shellfish) can accumulate extremely high levels of carcinogenic chemical residues, such as polychlorinated biphenyls (PCBs). The flesh of farmed salmon has seven times more PCBs than the flesh of wild-caught salmon.

According to The New England Journal of Medicine, fish “are the main if not the only source of methyl mercury,” a substance that has been linked to cardiovascular disease, fetal brain damage, blindness, deafness, and problems with motor skills, language, and attention span. The Environmental Protection Agency and the FDA warn women of child-bearing age and children to refrain from eating fish such as shark, swordfish, and king mackerel and to consume fewer than 12 ounces a week of other fish flesh because of mercury levels. Of course, the best way to avoid the dangers of mercury is to not eat fish at all.