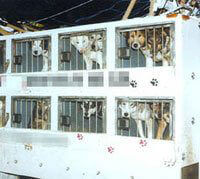 Imagine running four marathons in a single day—and throw in biting winds, treacherous terrain, and freezing temperatures. Then do it all over again every day for up to seven more days. That’s exactly what the dogs used in the annual Iditarod Trail Sled Dog Race are forced to do. It’s only one of several such races in which “mushers,” or dogsled drivers, compete for money and other prizes. The dogs, who are viewed as little more than snowmobiles with fur, are lucky if they finish the race alive and without serious injuries.

The Most Notorious of Races

Since 1995, the Iditarod’s top finishers have covered the approximately 1,000-mile course in nine days or less—and that includes one mandatory 24-hour stop. This means that dogs run more than 100 miles a day while pulling sleds weighing hundreds of pounds through some of the harshest weather conditions on the planet. Temperatures have plummeted to 60 degrees below zero during some races. Mushers revel in taking the credit for finishing the race, even though they ride, eat, and sleep while the dogs burn 12,000 calories a day doing all the work. Sportswriter Jon Saraceno, who coined the term “Ihurtadog,” says the race is “frenzied lunacy.”

Although death records were not kept in the early days of the race, we do know that 27 dogs used in the Iditarod have died just since 2004. Rule 42 of the official Iditarod rule book includes a list of the types of deaths that are accepted as “unpreventable”.

Dogs used in the Iditarod are routinely given antacids to try to prevent gastric ulcers. A veterinarian who studied dogs used in the Iditarod found that exercise-induced stomach disease may affect 50 to 70 percent of the dogs who enter the race, a number significantly higher than is seen in non-racing dogs. Dogs with ulcers typically show no symptoms until the condition becomes life-threatening and they start to bleed internally, vomit, or simply choke and die.

“The race would violate animal cruelty laws … in 38 states and the District of Columbia. Of course, Alaska has no such law.”

In 2013, 5-year-old Dorado was buried under a snowdrift and died of asphyxiation. Three-year-old Nash was hit and killed this year by a snowmobile. Other dogs have died from acute pneumonia, being stomped by moose, and “exertional myopathy” (running to death).

There are other (albeit lesser-known) grueling and deadly endurance races, including the Copper Basin 300, the Race to the Sky, and the Yukon Quest. In addition to opportunities to watch competitive races, many tourist operations offer dogsled rides.

Suffering Behind the Scenes

Life off the trail is also grim. Most kennels keep dozens of dogs, who live on short chains and have only overturned barrels or dilapidated doghouses for shelter. Between races, their world extends no farther than the end of their 6-foot tether. They are deprived of everything that is meaningful to dogs: exercise, play, mental stimulation, and companionship. Slow runners are doomed. There’s no requirement to report how many dogs are “culled,” so beyond the number of dogs who die during races, the death toll is unknown.

In 1991, Frank Winkler, a two-time Iditarod racer, was charged with 14 counts of cruelty to animals after an animal control officer found a crate of dead and dying puppies in his truck. Winkler, who claimed that he couldn’t afford to take the animals to a veterinarian to be euthanized, allegedly bludgeoned them with the blunt end of an ax.

In 2004, nearly 30 emaciated dogs were seized from David Straub, who ran the Iditarod three times. Straub was charged with 17 counts of cruelty to animals.

The Krabloonik kennel, the largest tourist dogsledding operation in the U.S., came under fire when the news broke that “excess” dogs at the Aspen, Colorado, facility were routinely shot in the head and buried in a pit. Krabloonik’s manager defended the killings, saying, “[Culling dates] back hundreds of years. This is nothing new … This is part of the circle of life for the dog-sled dog.”

“[The dog] was covered in snow and appeared dead. That was when I yelled out to the driver that he was dragging a dog but he wouldn’t stop.”

—Witness who lodged a complaint about Krabloonik

The dogs who escape barbaric “cullings” at the hands of mushers and facility operators are often taken to shelters that tend to become overwhelmed with unwanted dogs when each racing season is over. One Fairbanks shelter calls this phenomenon “the spring husky dump.”