Gregg Woody, a longtime PETA target, is a notorious animal exhibitor who runs Woody’s Menagerie—a cruel traveling exhibit that carts big cats, bears, and other animals to fairs and festivals around the country. 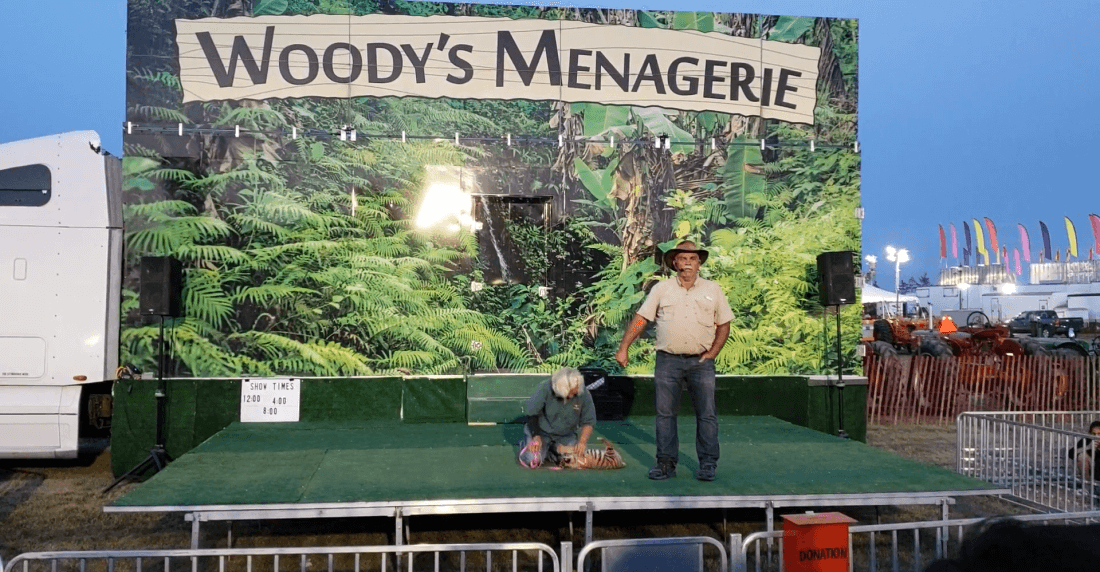 Woody’s cruel treatment of animals goes far beyond his traveling show’s abusive practices of confining big cats to tiny display cages and dragging animals on stage by dog leashes. His vile “side gig” is acting as a middleman for the roadside zoo industry. 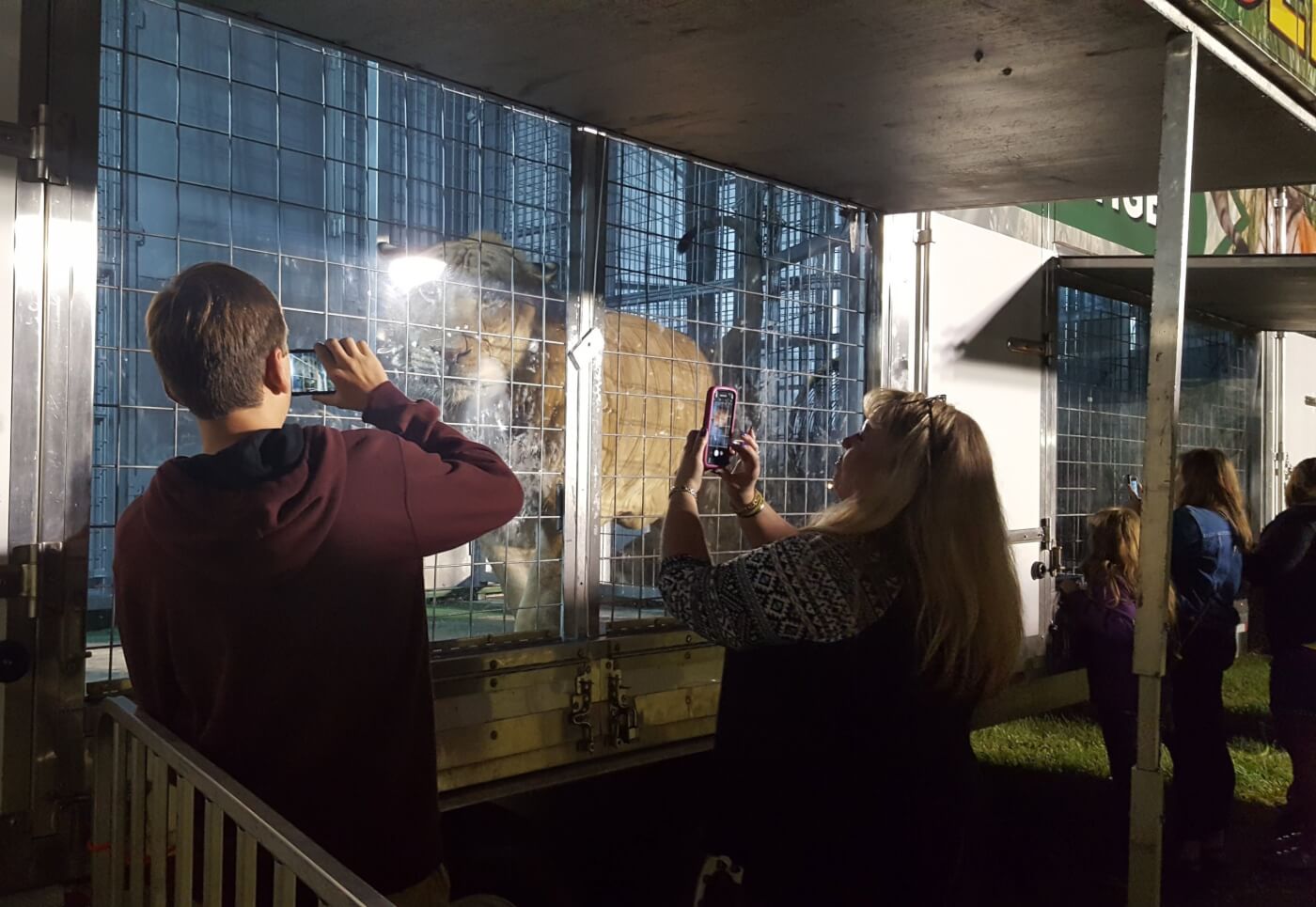 This liger—the hybrid offspring of a male lion and a female tiger—is part of a traveling display exhibited by Gregg Woody, who has shuttled hundreds of big cat and bear cubs around the country in his dealings with key players in the abusive cub-petting industry, including Joe Exotic.

Since 2007, at least 30 of his “transactions” with other tourist traps have been of newborn cubs, including four 3-day-old liger cubs, a 2-week-old tiliger, and a 24-day-old cougar named Mokie.

Tearing babies away from their mothers and shipping them to other facilities—some of which are thousands of miles away—is extremely dangerous for big cats, who typically stay with their mothers for up to two years in nature. Without their most important bond, big-cat cubs lack a fully functioning immune system, which can impair their ability to cope with disease or infection.

Woody has reportedly been charged with unlawfully transporting and selling animals on multiple occasions. The Florida Fish and Wildlife Conservation Commission (FWC) has reportedly charged him with four misdemeanors for unlawfully transporting and selling animals in the state, and in 2016, the FWC issued him a written warning when he sent two tiger cubs across state lines to the Zoological Wildlife Foundation without the required import permits.

Woody continued illegally buying and transporting animals after his license was temporarily suspended by the U.S. Department of Agriculture (USDA). After buying 10 black bear cubs from Yellowstone Bear World in 2017, he sent the animals to West Coast Game Park Safari, G.W. Exotic Animals Memorial Park, and Animal Entertainments Inc. (which then sent the bears to Oswald’s Bear Ranch). One of the cubs, Carla, died within a month of being sent to Oswald’s Bear Ranch, and another, Sophie, escaped for three days in 2019 and was shot dead by police.

It’s impossible to know how many animals have been killed in Woody’s care or as a result of his slimy business deals, as he’s been repeatedly cited by the USDA for failing to make complete records of his transactions. For example, the USDA found that at least 276 of his transactions between 2008 and 2012 lacked proper documentation. 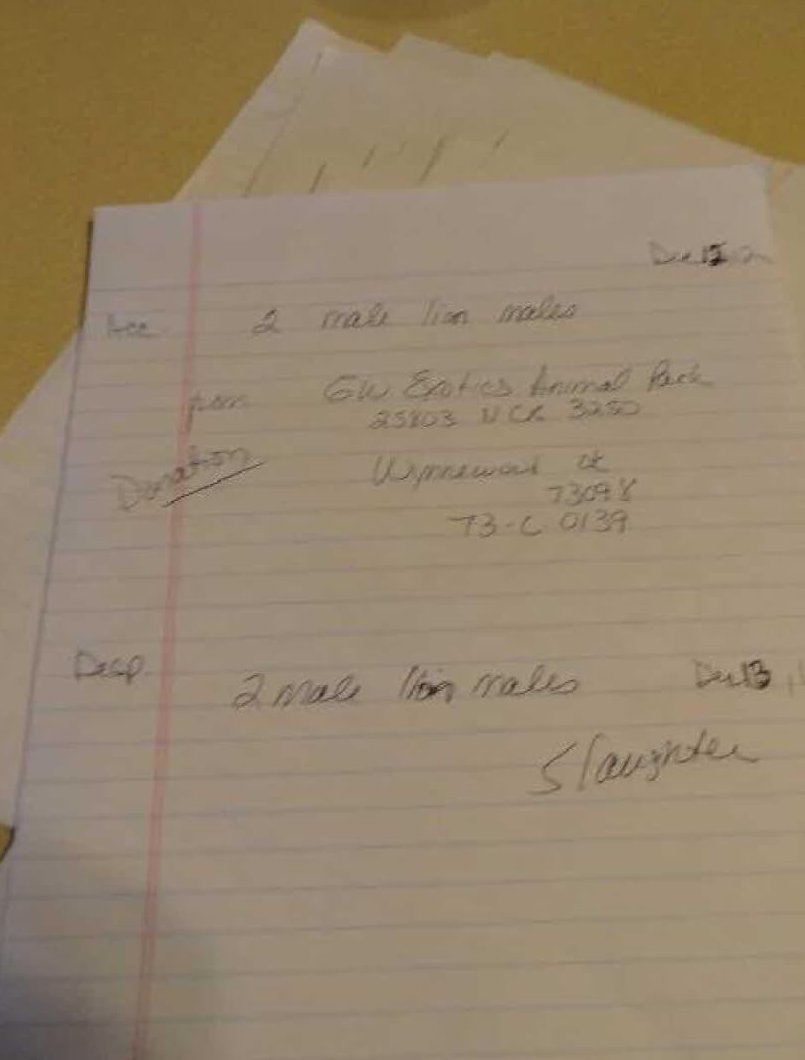 PETA submitted a Freedom of Information Act (FOIA) request to the USDA, which reveals Woody’s sketchy documentation of the animals he sent to slaughter.

In that same four-year period, Woody sent at least 21 lions and 41 bears to slaughter, including a brown bear named Annie, whom he sent to Eickman’s slaughterhouse. He sold her butchered flesh without making a sales invoice. In 2012, he acquired two lions from Joe Exotic’s G.W. Zoo and sent them to the same slaughterhouse the next day. In 2016, the USDA cited Woody again for incomplete records after he sent two more bears to slaughter.

We’ll never know the full extent of Woody’s slaughterhouse pipeline, but around 138 bears and big cats he’s acquired have gone unaccounted for. For example, Yellowstone Bear World sent Woody 23 black bears who were too old for public encounters. With no demand for older black bears at roadside zoos, it’s likely that he sent these animals to slaughter.

Roadside zoos treat animals like commodities and discard them when they’re too old to be exploited. Take action to help other animals suffering in roadside zoos across the country below: