A bull-riding participant in the Bell County Rodeo in Belton, Texas, was “bucked off the bull almost immediately after coming out of the gate,” prompting the rider’s father to run into the arena. One outlet called the father a “hero,” but before doling out any more kudos, consider this important detail: The bull was just protecting himself.

This young man voluntarily risked injury and death by participating in the event. The bull he decided to torment had no such choice. This animal was left with one choice only: to defend himself.

Rodeo performers have been observed beating, kicking, and shocking normally docile bulls and other animals in holding pens—abuse they inflict in order to provoke bulls’ instinct to run from harm. It’s no wonder that by the time bulls are released into the arena, they’re frantic.

Rodeos are nothing more than manipulative displays of human dominance over animals, thinly disguised as entertainment. Many bulls forced to participate have sustained fatal injuries, including broken backs and necks, and have experienced heart attacks and aneurysms. The ones who aren’t killed during events, however, often still meet a vicious death: When they’re too old or worn out to continue “performing,” “retirement” often means a one-way trip to the slaughterhouse.

Bulls Are Being Tormented—They Need Us to Speak Up

Step one in helping bulls like this one is simple: Never support rodeos, bull riding, or any other activity that forces animals to perform. If a rodeo does come to your town, write letters to sponsors, leaflet at the gate, or hold a demonstration. You can contact PETA for help, too. 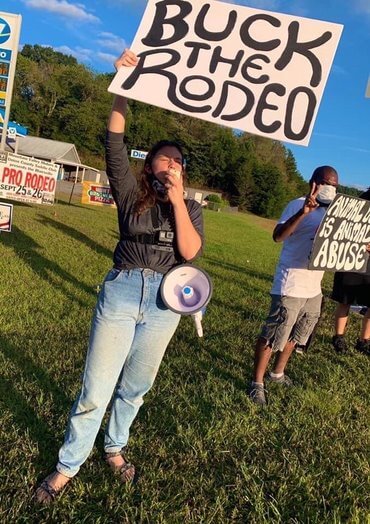 Students Opposing Speciesism—the PETA-backed, youth-led revolt against human supremacy—doesn’t miss a beat in furthering the mission of ending speciesism, including when it comes to denouncing rodeos.

Click the buttons below to speak up for vulnerable bulls far and wide, and click here to take action for bulls being tormented in other barbaric “sports.”