Sophie was a young North American black bear whose April 2019 death broke hearts all over. After escaping from her enclosure at Oswald’s Bear Ranch (a Michigan tourist trap that uses bears for exploitative photo ops), she was shot and killed when she was found—days later. Folks were outraged when they learned of her violent death. But PETA recently discovered an interesting connection regarding Sophie, and it might result in more of that same fury. (But don’t fret—we’ve got a place for you to channel all your disgust for Oswald’s.) 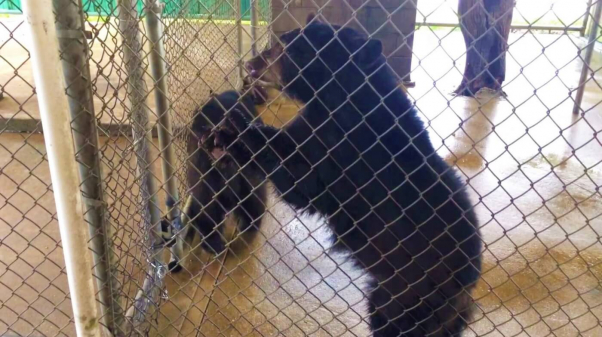 Before she was killed, Sophie was kept in a cage with two other young bears, Ashley and Sassy. All three were observed pacing and crying out, and Sassy has been seen repeatedly chewing on a cage—all signs of severe distress.

We knew that Sophie arrived at Oswald’s from Animal Entertainments Inc. (a dealer in Wisconsin) that had acquired her from Nick’s Barnyard Buddies (a roadside zoo in Missouri). We thought she had been born at Nick’s, but new information has offered up a different possibility that’s perhaps even worse. Yellowstone Bear World (a seedy Idaho exhibitor that breeds baby bears and then terrorizes them for money) actually sent some bear cubs to Nick’s just two days before Sophie arrived at Animal Entertainments Inc. So she may have been born at Yellowstone Bear World in Idaho, trucked to Missouri, then shipped off to Wisconsin and later carted to Michigan (and subsequently kept in a concrete pen, exploited for photo ops, and shot and killed). Why would this be worse than her having being born at Nick’s? What we’d thought was roughly an 880-mile journey may have actually been a 2,200-mile trek over just three days—all while baby Sophie should have been safe and comfortable at her mother’s nurturing, protective side.

These tourist traps’ shoddy recordkeeping means that we’ll probably never know for sure whether Sophie was born at Yellowstone Bear World. But that it’s even a possibility is testament to how horrific the cub-petting industry is.

We can confirm plenty about the place where Sophie spent most of her short life:

Her entire life was spent being exploited, only to end up shot dead after she escaped. Help us take action for the other bears at Oswald's Bear Ranch before it’s too late: https://peta.vg/35wm

Posted by PETA (People for the Ethical Treatment of Animals) on Thursday, July 1, 2021

In nature, bear cubs spend their time playing, exploring, and socializing with one another and their mother. But at Oswald’s, cubs are used for photo ops, which are highly disruptive and can result in long-term psychological stress. When not being used as props, these juvenile bears are confined to concrete-floored enclosures, which can be especially damaging to their fragile bones and muscles and lead to painful and debilitating joint problems as they age.

No animals should ever be confined to cramped cages and forced to suffer just so humans can take photos with them (or for any other reason). Don’t let Oswald’s continue to get away with this exploitation—click below to urge the roadside zoo to send the remaining bears there to accredited sanctuaries before more of them die: