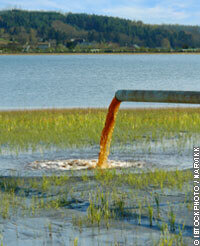 How the Sickness Spreads

Animals on factory farms generate many times the amount of excrement produced by the entire U.S. population, and this waste pollutes the air we breathe and the water we drink. Every second, our nation’s factory farms create roughly 89,000 pounds of waste, which contains highly concentrated chemical and bacterial toxins—all without the benefit of waste-treatment systems. According to a contamination study conducted by Minnesota agricultural extension engineer John Chastain, “The data indicates that the pollution strength of raw manure is 160 times greater than raw municipal sewage.”

This waste is usually dumped into sprawling brown lagoons to rot, or else it is sprayed over fields, allowing harmful chemicals and bacteria from the sewage to poison our air and water every day. According to the Centers for Disease Control and Prevention (CDC), “[C]hemical and infectious compounds from swine and poultry waste are able to migrate into soil and water.” This untreated waste often sickens the people who work on or live near factory farms.

Toxic gases and bacteria from animal excrement enter the air and are distributed over a very wide area by the wind. When the cesspools that hold tons of animal urine and feces are full, factory farms frequently circumvent pollution limits by spraying liquid manure into the air, creating mists that are spread by the wind.People for miles around are forced to inhale the toxins and pathogens from the sprayed manure and, as a result, can suffer health problems ranging from asthma and brain damage to birth defects and premature death.

People who live near factory farms face the constant threat that run-off from the farms will poison their waterways, bringing serious illness and even death to their communities. “The water in those areas is not in good shape, and the primary cause of the [pollution] is not septic tanks, treatment plants, or fertilizer—it’s manure, mainly from large farms,” said Robert Miltner, an aquatic biologist for the Environmental Protection Agency in Ohio.

A study found that a major river in Colorado has high levels of three antibiotics that are used exclusively in farmed animals.Outbreaks of E. coli closed half of Iowa’s beaches during the summer of 2001, and the water in Des Moines’ Raccoon River has nitrate levels that are almost double the limit allowed for drinking water. Large farms are implicated in both of these problems. In 2000, an E. coli outbreak in Walkerton, Ontario, left seven people dead—experts cite cow manure that seeped into the town’s water supply as a likely cause of the tragedy.

Scientists believe that 3.2 billion pounds of raw sewage from chicken farms on the Delmarva Peninsula caused an outbreak of pfiesteria in the Chesapeake Bay in 1997. The contamination killed 30,000 fish and caused memory loss, skin lesions, and respiratory problems in people who were exposed to the water.

Factory farms and the contamination that they produce cause illnesses in humans that range from brain damage and depression to miscarriage and birth defects. They are also responsible for antibiotic-resistant bacterial infections and severe respiratory problems. Politicians and government agencies continue to ignore the growing threat that these farms pose to our health and to the environment because of the combination of powerful meat industry lobbyists in Washington, large campaign contributions from the meat and dairy industries to key legislators, and executive agencies (e.g., the U.S. Department of Agriculture) that hire meat and dairy industry representatives to fill crucial posts.

Scientists have shown that there is a link between exposure to the toxic chemicals found in animal waste and the development of neurological problems, including brain damage and depression. According to University of Southern California toxicology professor Dr. Kaye H. Kilburn, the “coincidence of people showing a pattern of impairment and being exposed to hydrogen sulfide arising from lagoons where hog manure is stored and then sprayed on fields or sprayed into the air” has a “practically undeniable” connection to neurological disorders in communities around the farms.

In an investigative report published in The New York Times, Ohio resident Robert Thornell discussed the permanent brain damage that he suffered when a factory farm was built near his home. “It’s like I have a 2.1 gigahertz body with a 75 megahertz mind,” he said. “I feel like collateral damage.” When Thornell’s wife was also diagnosed with brain damage, the couple was forced to move away from their home in order to prevent further deterioration of their health.

Fumes from manure pits have also been linked to severe depression. In a speech at the American Veterinary Medical Association, Dr. Kelley Donham, director of the University of Iowa’s Center for Agricultural Safety and Health, cited numerous studies that found unusually high rates of depression and anxiety among people who live near factory farms. A North Carolina study also found high rates of depression and fatigue in the neighbors of a pig farm.

Living near a factory farm can be catastrophic for pregnant women. For example, the CDC believes that manure from a factory farm seeped into the groundwater of a small Indiana town and caused at least seven miscarriages.

A joint report by the U.S. Geological Survey and the Oklahoma Department of Agriculture states that ingesting water with nitrate levels above 10 milligrams per liter can cause “blue baby” syndrome (methemoglobinemia), which is a condition that prevents blood from carrying oxygen and which can lead to “increased rates of stomach cancer, birth defects, miscarriage, leukemia, non-Hodgkin’s lymphoma, reduced body growth and slower reflexes, and increased thyroid size.” According to the report, nitrate levels in a “manure lagoon” on a typical pig factory farm measure an incredible 300 milligrams per liter, which is a level that creates a substantial threat to families who drink from nearby water sources.

Animal waste emits ammonia, hydrogen sulfite, methane, volatile organic compounds, and particulate matter from fecal dust. These irritants enter the lungs of anyone who is nearby and can cause serious respiratory illnesses.

A February 2002 study conducted by Iowa State University and the University of Iowa Study Group found that as many as 70 percent of U.S. factory farm workers suffer from acute bronchitis, and 25 percent battle chronic bronchitis. Even more disturbing, a recent University of Iowa study found that an astonishing 46 percent of children who live on pig factory farms with more than 500 pigs suffer from asthma. On factory farms where antibiotics are used as a growth stimulant, the asthma rate in children climbs to more than 55 percent.

Factory farm employees and people in the surrounding communities are frequently exposed to animal excrement and the dangerous bacteria it can carry—bacteria like E. coli, salmonella, and campylobacter.

On the Delmarva Peninsula in Maryland, Dr. Ellen Silbergeld found that more than 40 percent of “chicken catchers” and more than 50 percent of processing plant workers were infected with campylobacter, a type of bacteria that causes diarrhea and abdominal pain and that can sometimes prove fatal. When a group of community members was tested for the bacterium, every person who was tested had a “positive” result.

Residents of a region known as “Feedlot Alley” in Alberta, Canada, have the highest rates of E. coli infections in the province, and E. coli killed almost a dozen children there in one three-year period. Dangerous germs from the excrement of farmed animals have sickened entire communities. A 1993 outbreak of cryptosporidium in Milwaukee sickened 403,000 people and killed 104 others. Scientists blamed the tragedy on animal excrement from nearby factory farms.

Factory farms are also breeding grounds for antibiotic-resistant bacteria, which are known as “supergerms.” On farms across America, the antibiotics that we depend on to treat human illnesses are now used to promote growth in animals and to keep them alive in horrific living conditions that would otherwise kill them. Countless new strains of antibiotic-resistant bacteria have developed as a result of this abusive practice.

Roughly 70 percent of the antibiotics used in the United States each year are given to animals who are used for food. What does this mean for you? It means that when you get sick, the antibiotics your doctor prescribes may no longer work.

Vancomycin, a drug that is known as a “last defense” in fighting the deadly blood infections and pneumonia caused by staphylococcus bacteria, is becoming obsolete because resistant strains have developed in farmed animals who are given the medicine as a growth stimulant. Similarly, the antibiotic used to treat campylobacter infections in humans is becoming worthless—even as these infection rates rise.

U.S. health officials declared a public health emergency on Sunday, April 26, 2009, in response to the swine-flu outbreak. Cases have been confirmed in the U.S., Mexico, and Canada, and countries from Spain to New Zealand are investigating cases of the flu strain. There is speculation that the swine influenza originated on pig factory farms.

The science is clear: Eating animal-derived products is harming communities, public health, and the Earth. Request your free vegetarian/vegan starter kit now to start on the road to a healthy, sustainable diet.