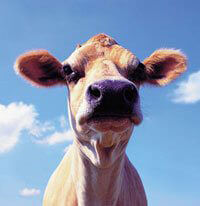 In the U.S., more than 29 million cows suffer and die in the meat and dairy industries every year. When still very young, many cows are branded (burned with hot irons), dehorned (their horns are gouged out or cut or burned off), and castrated (male cattle have their testicles ripped out of their scrotums)—all without painkillers.

Once they have grown large enough, cows raised for beef are sent to massive, filthy outdoor feedlots, where they are fattened for slaughter. Cows on dairy farms are repeatedly artificially impregnated (in order to keep their milk flowing) and then traumatically separated from their newborn calves until finally their bodies wear out and they are sent to be killed, too.

Like animals of all species, cows form strong maternal bonds with their calves, and on dairy farms, mother cows can be heard frantically crying out for their calves for several days after they have been separated.

Cows are gentle giants—curious, clever animals who have been known to go to extraordinary lengths to escape from slaughterhouses. They are gregarious, preferring to spend their time with other cows, and they form complex relationships, much like dogs in packs.

Cattle may be transported hundreds of miles in all weather extremes, typically without food or water, to the slaughterhouse. Cows who don’t die on the way to slaughter from exposure or traffic accidents are shot in the head with a captive-bolt gun and hung up by one leg then have their throats cut before finally being skinned and gutted. Some cows remain fully conscious throughout the entire process. In an interview with The Washington Post, one slaughterhouse worker said, “They die piece by piece.”

You can help put an end to these atrocities. Order PETA’s free vegan starter kit for tips and recipes to help you make the transition to a cruelty-free diet today.