In the U.S. today, 99% of animals used for food live on massive industrial “factory farms,” where they’re crammed by the thousands into wire cages, metal crates, or other extremely restrictive enclosures inside filthy, windowless sheds. These animals will never raise their families, root around in the soil, build nests, or do anything that is natural and important to them. Most won’t even feel the warmth of the sun on their backs or breathe fresh air until the day they’re loaded onto trucks headed for slaughterhouses.

The factory farming industry strives to maximize output while minimizing costs—always at the animals’ expense. The giant corporations that run most factory farms have found that they can make more money by squeezing as many animals as possible into tiny spaces, even though many of the animals die from disease or infection. 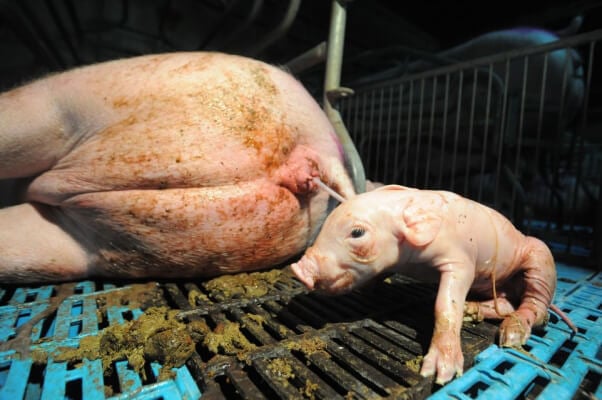 When they’ve grown large enough to slaughter or their bodies have been worn out from producing milk or eggs, animals raised for food are crowded onto trucks and transported for miles through all weather extremes, typically without food or water. At the slaughterhouse, those who survived the transport will have their throats slit, often while they’re still conscious. Many remain conscious when they’re plunged into the scalding-hot water of the defeathering or hair-removal tanks or while their bodies are being skinned or hacked apart.

You can help end this abuse. Order a copy of PETA’s free vegan starter kit for tips and recipes to help you go vegan today.