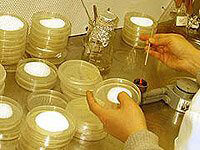 Tests That Reduce or Replace the Use of Animals

The following is a brief overview of some new test methods available for use in the high production volume (HPV) program to reduce or eliminate animal use:

Mammalian acute toxicity can be studied using cell culture (in vitro) systems because the actions of toxic chemicals are often focused at the cellular level. For example, a series of four cell culture tests can predict toxicity in humans with nearly 85 percent accuracy (compared to 65 percent in acute toxicity studies using animals).

Fish acute toxicity is intended to predict the potential for economic loss and ecological damage resulting from fish death on a large scale. If exposure to test substances is toxic to the food on which fish subsist, fish populations could be affected even without direct fish toxicity. It is therefore reasonable to characterize the toxicity of test substances to aquatic plants and invertebrates prior to consideration of acute toxicity testing on fish. In addition, fish are often not the most sensitive species, so in cases where fish acute toxicity is required, a single fish test can be performed based on information from algae and shrimp.

Repeated dose toxicity can be studied using cells cultured from different body tissues to estimate the effects of a chemical on different organ systems. For example, human liver cells in culture could be exposed to repeated, low doses of a chemical in order to study how it is broken down (metabolized) by the body and to identify any toxic by-products (metabolites) that may be produced in the process. Stable human cell cultures have been produced for kidney, nervous, immune, reproductive, and other essential organ systems. A tiered testing strategy that combines several of these tissues in culture with the use of computer and mathematical modeling has the potential to do away with animal use in repeated-dose toxicity studies.

Developmental toxicity can be studied in cell culture using an embryonic stem cell test, which has been validated by the European Centre for the Validation of Alternative Methods as a test for embryotoxicity—a critical parameter and manifestation of developmental toxicity. This validated test method is ideally suited for immediate use as a reduction measure in a basic, screening-level program such as the EPA’s HPV Challenge. Chemicals that test positive for embryotoxicity could be classified as probable developmental toxicants without further testing.

Genetic toxicity can be studied entirely without the use of animals. Three methods in particular (the bacterial reverse mutation test, the in vitro cell gene mutation test, and the in vitro chromosomal aberration test) have been accepted by government regulators worldwide as valid alternatives to using animals. Combined with information on metabolism, in vitro methods could replace the need for in vivo testing all together.

More generally, the following computer-based modeling approaches have shown great promise in contributing to the replacement of animals in toxicity testing:

Structure-activity relationship (SAR) analyses use computers to seek to predict adverse biological effects of chemicals based on their molecular structure, weight, and electronic charge. SAR data can be used to estimate whether a specific chemical produces a particular biological response, including toxicity, without recourse to animals. Such approaches have shown 85 to 97 percent accuracy in predicting dermal sensitization, teratogenicity, and carcinogenicity for related groups of chemicals.

Computer-based mathematical modeling involves the use of computers to model living biological systems, such as the human circulatory and respiratory systems. For example, physiologically based bio-kinetic models (PBBKs) use computers to study the absorption, distribution, metabolism, and excretion of a chemical by the body. They can also be used to determine the relationship between the dose of a chemical and a particular metabolic effect. One such model, the ED01, studies tumor production in response to chemical exposure. It can detect an increased tumor activity of 1 percent, and at doses of a chemical much lower than those customarily used in rodent studies.