Regulatory authorities, such as the U.S. Environmental Protection Agency (EPA) and the U.S. Food and Drug Administration, require carcinogenicity tests for substances including pesticides and pharmaceuticals. For decades, these tests have been conducted using mice and rats, even though the tests don’t adequately predict whether a substance will cause cancer in humans.

In these tests, animals are exposed to chemicals daily either by gavage (shoving a tube down the esophagus and into the stomach to pump chemicals in directly), by inhalation (animals in small tubes are forced to breathe in the toxic chemicals), or through the skin (animals are shaved and chemicals are rubbed onto their skin). 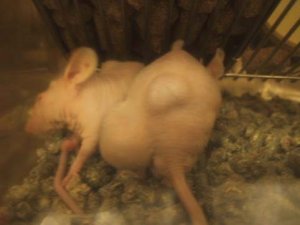 Each carcinogenicity test required to register a single pesticide involves poisoning at least 880 mice and rats every day for 18 months or two years (their typical life expectancies, respectively). This means that in the U.S. alone, approximately 6,000 animals are killed every year just for carcinogenicity testing of pesticides, and this number doesn’t include the animals killed to test other products or for additional testing required by international regulatory agencies.

It’s widely accepted in the scientific community that the carcinogenicity test, which hasn’t been updated in more than 50 years, isn’t effective in predicting cancer in humans. As a result, experts from government, industry, academia, and nongovernmental organizations are discussing how to implement more human-relevant testing strategies that don’t use animals.

PETA scientists are collaborating with international experts to develop a new policy to consider other sources of data in place of the rodent cancer tests—sparing rats and mice without compromising human health. The best way to protect humans from developing cancer as a result of exposure to dangerous chemicals is to rely on human-relevant tests, such as computer models, cell cultures, three-dimensional tissue engineering, and human epidemiology studies. PETA scientists will continue to collaborate on the advancement and regulatory acceptance of non-animal approaches to replace the lifetime carcinogenicity tests on rodents.