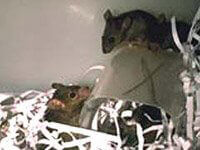 Following five months of discussions and campaign tactics—ranging from having a man in a bunny suit trail former U.S. Vice President Al Gore to public criticism from Sir Paul McCartney, Bill Maher, and Alec Baldwin—PETA and other animal protection organizations reached an agreement in October 1999 with the Clinton Administration that saved the lives of up to 800,000 animals. In addition, the agreement added animal protection measures to the Environmental Protection Agency’s (EPA) High Production Volume (HPV) chemical-testing program, which was fast-tracked by Mr. Gore. The HPV program originally called for the testing of 2,800 widely produced industrial chemicals.

The agreement greatly reduced the number of animals used—original estimates indicated that up to 1.3 million animals of various species would be poisoned and killed—and set a precedent in the government’s incorporation of non-animal methods into testing requirements. The following are some key points of the 1999 agreement:

As a result of the agreement, PETA called off its national grassroots campaign against Mr. Gore for his role in fast-tracking the HPV program.

Click here to read the EPA’s letter to HPV program participants outlining the above agreement.