What’s wrong with elephant painting and elephant bathing? True sanctuaries don’t force animals to perform tricks, and they don’t use “training” methods that involve weapons. To make elephants learn demeaning tricks, handlers beat, shock, and punish them. Through pain and fear, elephants are forced to learn confusing routines that have no connection to their natural instincts and conduct. Enduring stress and trauma can lead elephants to exhibit abnormal and harmful types of behavior, such as constant swaying and increased aggression. Sadly, most captive elephants die decades short of the natural life expectancy of their species.

Here’s what goes on behind the scenes at eight American roadside zoos where elephants are forced to give rides, paint, “play soccer,” and perform other confusing tricks:

Notorious elephant exploiter Have Trunk Will Travel, known for this shocking undercover video of trainers hitting, jabbing, chaining, and shocking elephants under the guise of “training,” moved from California to Texas following the enactment of California’s bullhook ban and rebranded itself as a “sanctuary” called Hill Country Elephant Preserve or “The Preserve.” 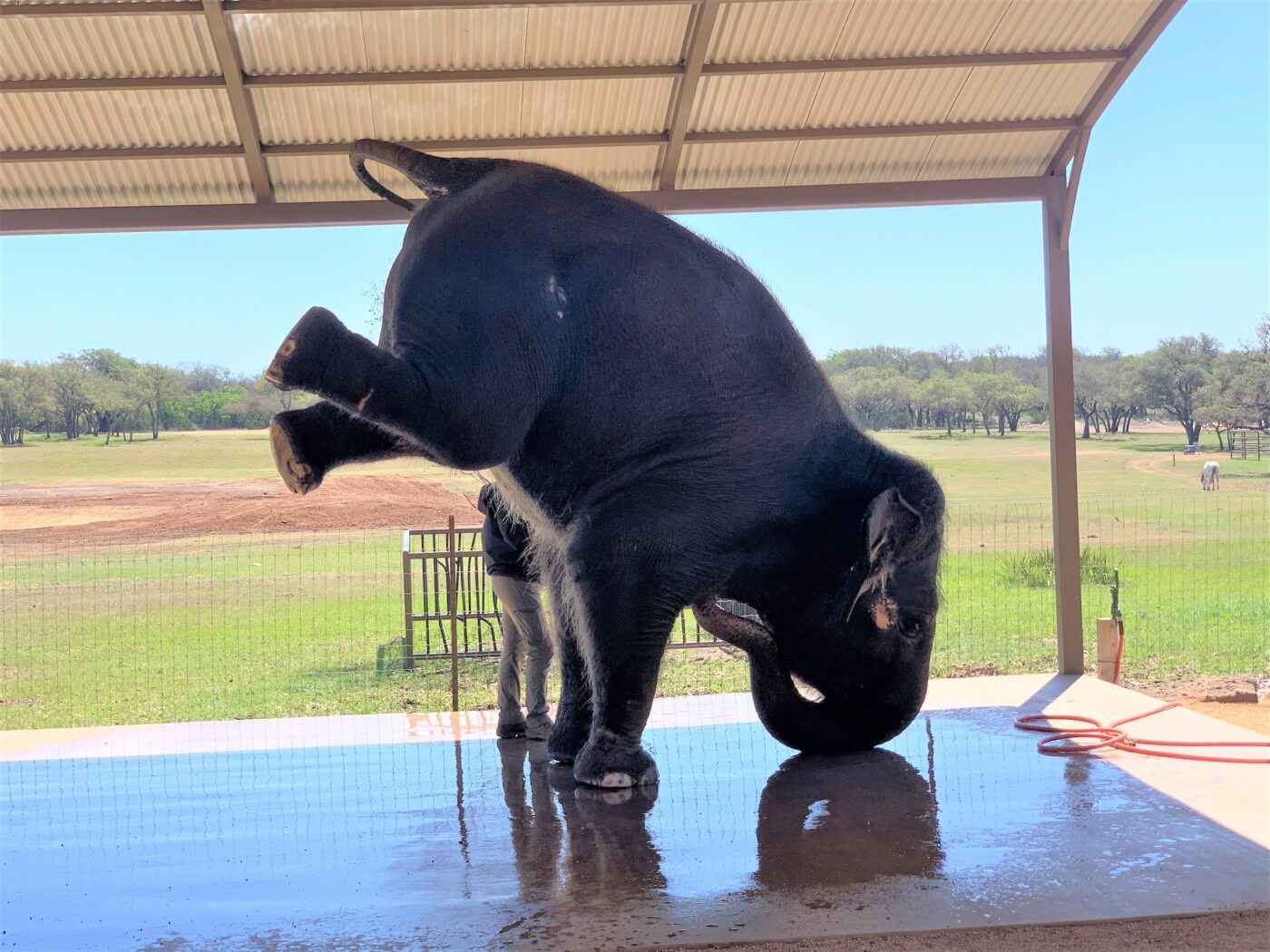 Don’t be fooled—this is no refuge, as the elephants, who have been rented out for film and TV, are now used for stunts such as bathing, painting, standing on their heads, and playing instruments, all while being prodded by trainers wielding bullhooks.

At this Northern California roadside zoo, elephants are forced to interact with guests who help “put them to bed” or feed them breakfast. 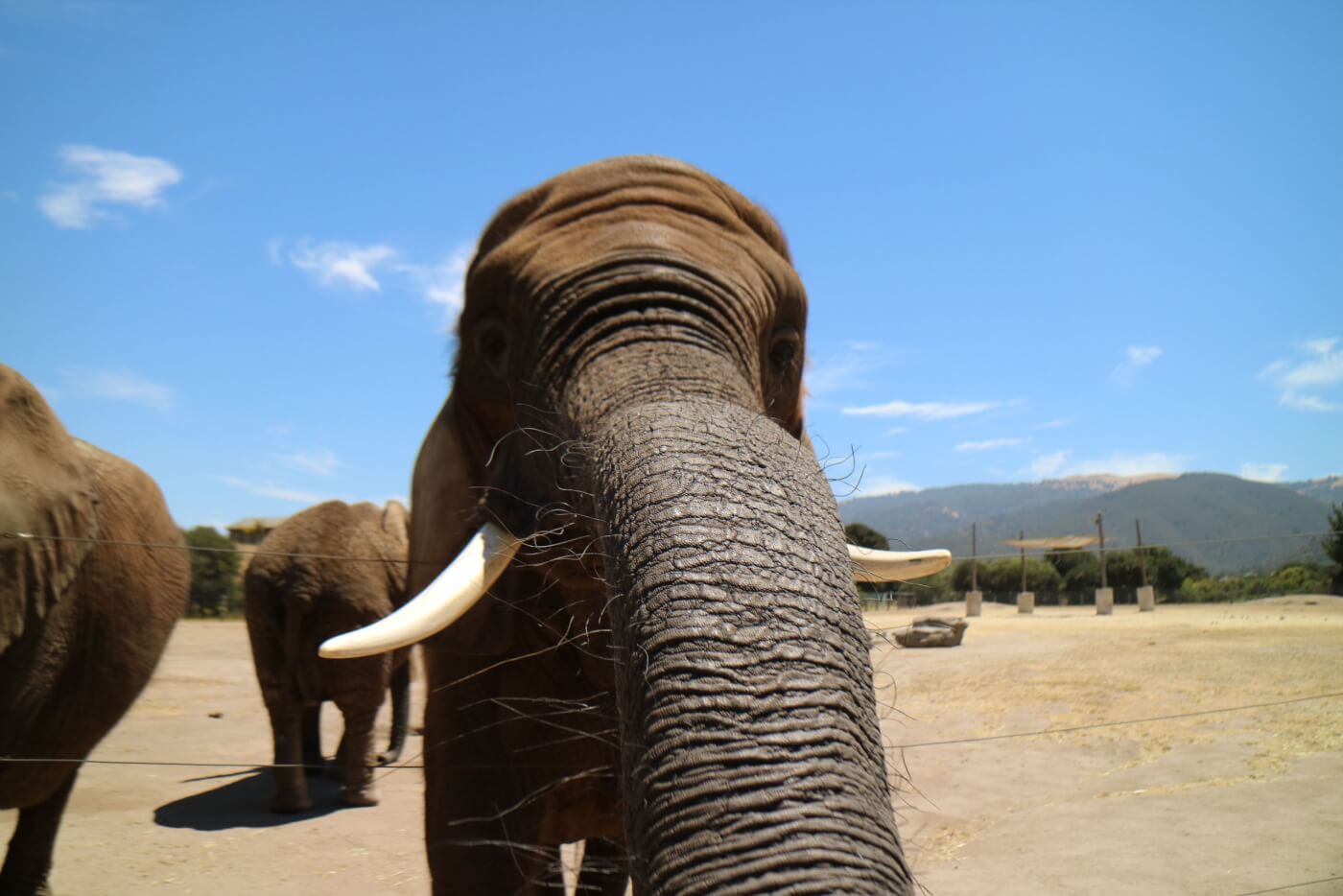 During one of these events in 2018, a handler “took aggressive action” against elephant Paula with a cane when she refused to keep walking, and Paula responded by stepping on and throwing the employee, injuring their back and breaking their ankle. The California Division of Occupational Safety and Health cited the roadside zoo for failing to establish and implement an effective injury and illness prevention program to ensure a safe work environment.

Furthermore, hitting Paula with a cane is apparently against California’s ban on using a “bullhook, ankus, baseball bat, axe handle, pitchfork, or other device designed to inflict pain for the purpose of training or controlling an elephant.” PETA has documentation showing that handlers at Monterey Zoo used a cane to control elephants dozens of times after the ban was enacted in January 2018, which we’ve sent to authorities to investigate.

Elephants are used for rides, photo opportunities, and “extreme encounters” at $200 a pop at this roadside zoo, which is also where elephants used in the Tarzan Zerbini Circus are boarded. 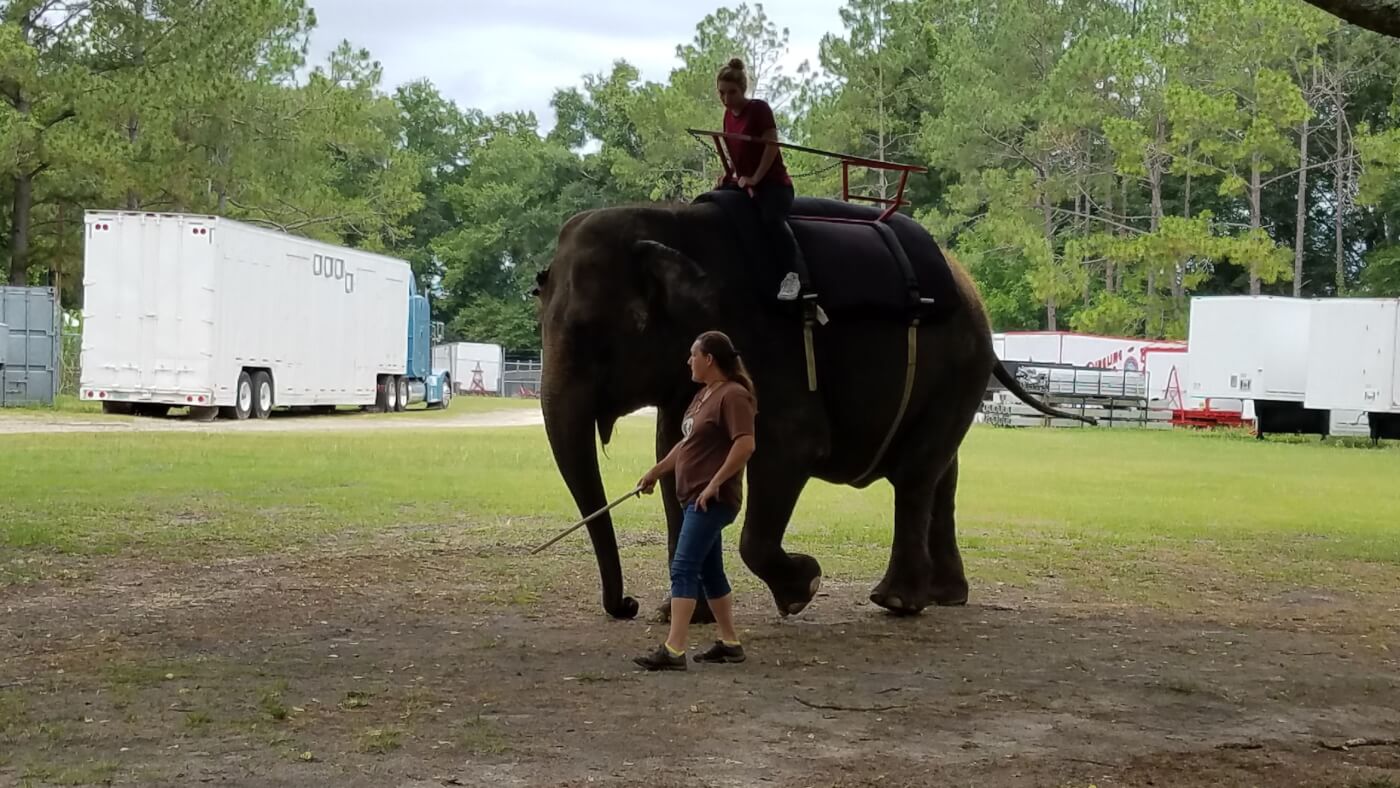 A visitor to the ranch was nearly killed in 2013 by Rajah, a male elephant who was so aggressive toward humans and other elephants that he was kept in chains for weeks after his arrival from Ringling Bros. This visitor approached Rajah’s unattended enclosure through an open gate, and he pulled her against the bars with his trunk, causing a collapsed lung, spleen damage, broken ribs, and degloving wounds—a serious skin injury.

The Zerbinis have a long history of dangerous elephant attacks involving serious injury and at least one human death, yet they are still allowed to operate. An elephant named Roxy was still being used for rides at Two Tails Ranch, even though she had once stepped on a circus worker outside a Tarzan Zerbini Circus and broke his pelvis.

Multiple elephants exhibited by Two Tails and Tarzan Zerbini have been quarantined because of tuberculosis infection or exposure, and the U.S. Department of Agriculture has cited both exhibitors for failing to meet the Animal Welfare Act’s minimum standards of care.

At this breeding facility and home site for Carson & Barnes Circus, elephant painting is just the tip of the iceberg. Elephants at this roadside zoo are also used for encounters like bathing, feeding, and photo ops when they’re not on the road performing.

Carson & Barnes is infamous for the mistreatment of the animals in its care, having racked up more than 100 federal animal welfare violations as well as fines, lawsuits, and animal abuse incidents stretching back to 1975. In this horrific undercover video, handlers can be seen shocking elephants with electric prods and hitting them with bullhooks until they scream, all in the name of “training.”

In 2016, Carson & Barnes paid a civil penalty of $16,000 to the USDA for improper handling of elephants on two occasions, one of which involved three elephants escaping, injuring themselves, and damaging property. It has an abysmal record of failing to provide adequate  veterinary care, perform valid tuberculosis tests, provide necessary foot care, treat skin problems, or furnish shade for elephants in 89-degree weather.

Carson & Barnes calls the foundation a “retirement” facility, but photos on its Facebook page and website clearly show handlers forcing the elephants to paint and be bathed with the use of bullhooks.

It’s hard work to get the perfect elephant footprint. Have you seen our footprint souvenirs and collectibles?

At these roadside zoos, elephants Carol, Patty, and Lou—previously exploited for circuses such as Jordan World Circus and UniverSoul Circus—are forced to participate in bathing, feeding, toenail painting, and photo interactions.

TripAdvisor reviews reveal that staff at Wilstem apparently provide misleading information about the elephants’ life histories, telling guests that they were “adopted as orphans” from Zimbabwe and live in a “sanctuary” in Florida when not at Wilstem. But the Florida facility, Myakka Elephant Ranch, is no sanctuary—instead of getting rest and relaxation, the elephants are made to perform the same demeaning stunts they do at Wilstem in the summer.

The circus exhibitors who exploit them at Wilstem and Myakka Elephant Ranch have long histories of elephant abuse, too. The Carden family, who most recently supplied Carol and Patty for Jordan World Circus, has employed workers who were hit with five cruelty-to-animals charges in Canada in 2000 for infliction of unnecessary pain and suffering on three elephants. The Carden family’s handlers have repeatedly been seen jabbing a bullhook into elephants’ mouths to punish them, even causing one elephant to urinate in distress. This abuse and their repeated failure to provide adequate veterinary care and handle elephants in a safe manner have landed them on PETA’s list of the top six worst circuses in the U.S.

The Barreda family, who exploited Lou in circuses for years, including in UniverSoul Circus, has a similar record of disregard for elephant well-being. When they were on the road, the Barredas routinely kept elephants on short chains for 24 hours a day, and they received an official warning from the USDA in 2011 after failing to maintain a program of adequate veterinary care. They were again cited in 2013 for failing to offer adequate veterinary care after Lou was observed with a large lump on her face secreting bloody discharge.

The Natural Bridge Zoo is one of the worst roadside zoos in the U.S., having been cited for almost 150 violations of the federal Animal Welfare Act and fined more than $20,000 by the USDA. Its exhibitor’s license has been suspended twice because of these egregious violations, but the USDA has yet to shut it down.

The facility holds one elephant, Asha, who is used for giving rides. She was captured from the wild and has lived alone for years, in unnatural isolation from others of her kind. She is forced to carry guests on her back all day long in the summer, walking in small circles in the hot sun, and is confined to a cold concrete-floored barn in the winter. 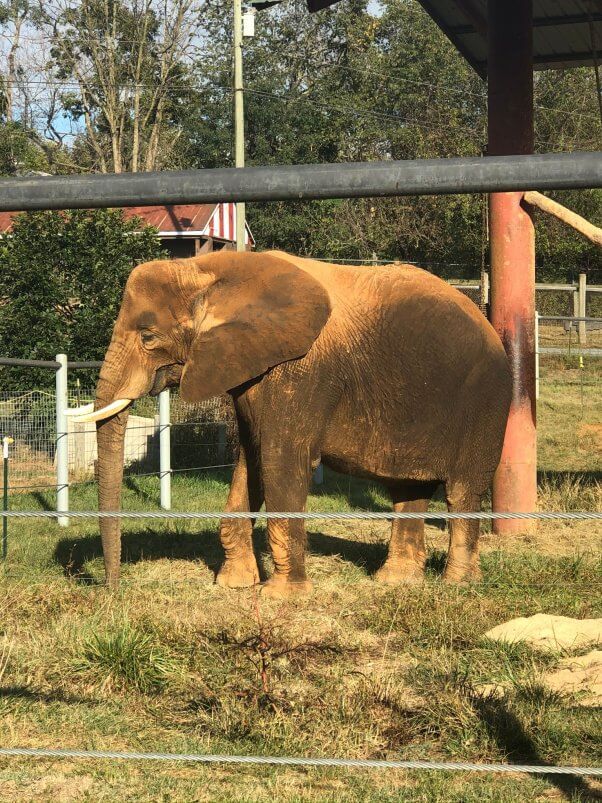 The Natural Bridge Zoo has apparently failed to provide Asha with basic veterinary care, making her give rides while she suffered with likely painful cracked and overgrown toenails.

Bhagavan Antle, one of the abusers highlighted in the Netflix docuseries Tiger King, runs this roadside zoo, also known as T.I.G.E.R.S. He supposedly maintains an on-site crematorium where he reportedly incinerates tiger cubs too big to use for photo ops, and he’s a key player in the exploitative big cat cub-petting network that included the now-incarcerated “Joe Exotic.”

Bubbles the elephant is used for feeding and photo encounters in pricey “safaris” and publicity stunts at Myrtle Beach Safari. She hasn’t seen another elephant for over 30 years. Meanwhile, the USDA has repeatedly cited Antle for an extensive list of federal animal welfare violations, including failing to provide animals with adequate veterinary care, water, uncontaminated food, and clean and safe enclosures.

Trunks and Humps is the elephant supplier for the biggest Renaissance fairs in the country—it carts all over the U.S. and forces them to give rides to the public under the threat of injury from a bullhook. There’s no rest at their home site, either, which Trunks and Humps calls the “East Texas Elephant Experience,” as they’re made to do demeaning tricks like lying down so guests can sit on them, walking backward in a circle, and making footprint paintings. 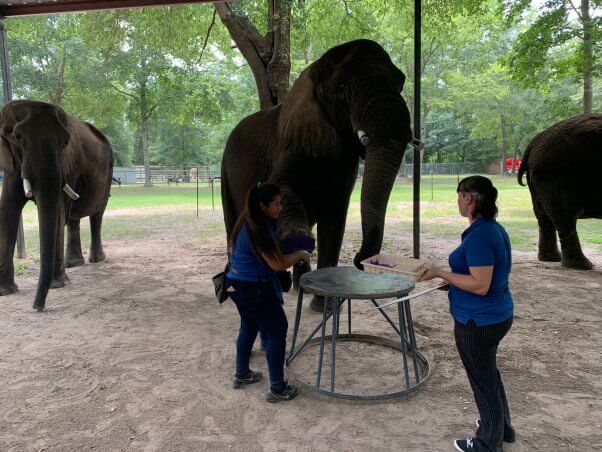 PETA has repeatedly alerted the USDA to Trunks and Humps’ apparent failure to care for the elephants’ feet properly, forcing them to continue doing stunts and giving rides with cracked toenails and swollen footpads. Toenail trauma can be exceptionally painful for elephants, and poor foot care can predispose their feet to bacterial infections.

Mike Swain—who runs Trunks and Humps—used to work in the circus industry and was caught on video kicking and beating Krissy in the face as well as dragging her to the ground with a bullhook at a circus.

The Murray family has been exploiting elephant Essex (formerly Annette) for years, forcing her to perform in circuses and give rides at the Maryland Renaissance Festival and the Bay Area Renaissance Festival. Now, they have rebranded as “Elephant Oasis” and are using Essex for pricey private experiences and photo shoots at their home in Florida. Essex has lived alone since her sole companion died in 2014, a solitary existence completely at odds with an elephant’s naturally social nature. PETA has even documented that the Murrays have made her give rides while lame.

The Murrays actively work to oppose legislation that would protect captive elephants from being hit with bullhooks or exploited for rides. Frank Murray was charged with four counts of cruelty to animals in New Jersey in 1996 and evaded justice for 16 years—he was finally arrested in 2012 when he returned to the state with the Piccadilly Circus (now called Garden Bros. Circus).

Elephants are highly social animals who form strong, lasting bonds with their family members. They work together to solve problems and rely on the wisdom, judgment, and experience of their eldest relatives. In their natural homes, elephants spend their days socializing, swimming, browsing, and playing.

Please, never visit roadside zoos or any other venue where wild animals are exploited for human profit.

Quick Ways to Help Elephants Using Your Phone or Computer 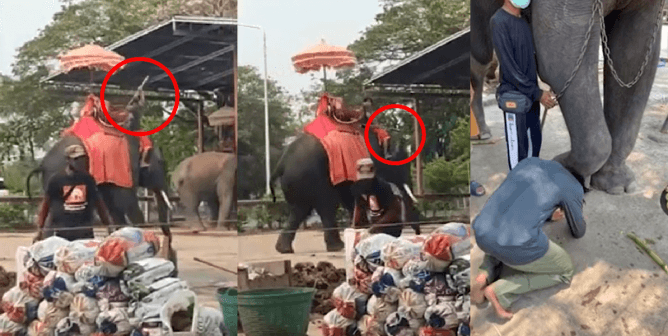 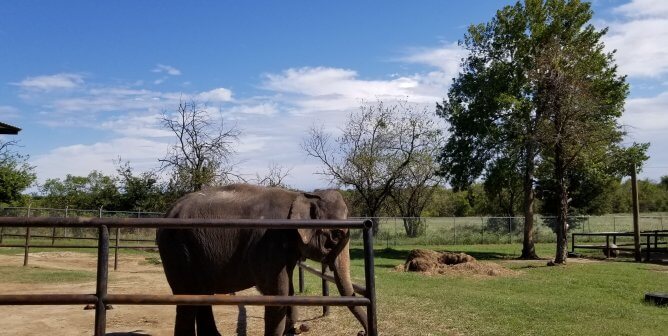