The bullhook is a weapon used to punish and control elephants. It is also called an ankus, elephant goad, or elephant hook. Its handle is made of wood, metal, plastic, or fiberglass, and there is a sharp steel hook and a point at one end. It resembles a fireplace poker, and it weighs about as much as a baseball bat. Circuses try to sugarcoat its purpose by referring to it as a “guide.”

Some bullhooks have a “shepherd’s crook,” cane-style handle, affording the trainer a firmer grip so that greater force can be exerted while sinking the hook deep into the elephant’s flesh.

Both ends of the bullhook inflict damage. The trainer uses the hook and the point to apply varying degrees of pressure to sensitive spots on the elephant’s body (see diagram below). Holding the hooked end, the trainer swings the handle like a baseball bat, inflicting substantial pain when the elephant is struck on the ankle and other areas where there is little tissue between skin and bone. While in public, handlers often carry bullhooks that are much smaller than the ones used in training, but because the elephants have been so thoroughly conditioned to fear them, they’ll still obey.

An elephant’s skin appears tough, but it is actually delicate enough to feel the sting of an insect bite. In fact, Kenyan farmers use beehives to protect their crops from wild elephants, who would rather skip a meal than be stung. A bullhook can easily inflict pain and injury. Trainers often embed the hook in the soft tissue behind the ears, inside the ear or mouth, in and around the anus, and in tender spots under the chin and around the feet. Within hours of being punctured by a bullhook, a welt or boil may erupt. The wound may grow larger if it becomes infected. 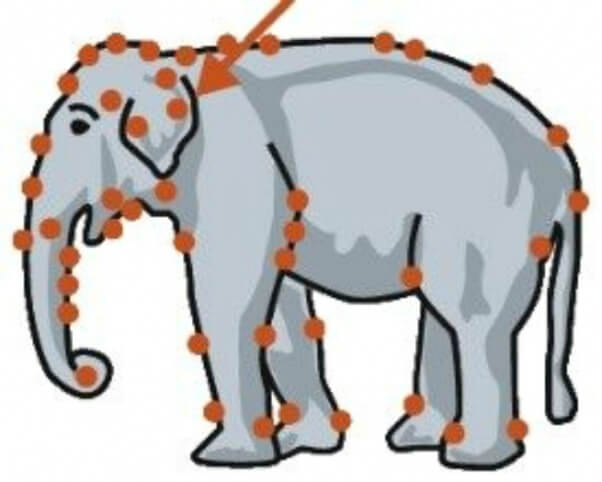 As this excerpt from Ringling Bros. and Barnum & Bailey circus’s own records shows, even Ringling Bros. acknowledges the damage done by bullhooks: “After this morning’s baths, at least four of the elephants came in with multiple abrasions and lacerations from the hooks.”

A Ringling animal behaviorist told a supervisor in 2005 that she’d been banned from the elephant barn after complaining about an elephant who was hooked severely enough to be “dripping blood all over the arena floor during the show.”

Another handler said he saw three to four puncture wounds a month from bullhooks, but they were considered too inconsequential to record in the medical files.

Handlers don’t hit elephants with bullhooks when they are in view of the public. Long before the elephants step into the ring, they have been conditioned through violent training sessions to fear the bullhook, and they know that refusal to obey will result in severe punishment later. Moments before entering the ring, while still out of sight, trainers may give the elephants a few painful whacks to remind them who’s boss and ensure that they perform on command.

The difficult tricks that elephants are forced to perform place a great deal of stress on their muscles and joints. They are physically strenuous, and no elephant would perform these grotesquely exaggerated maneuvers on command, over and over, hundreds of times a year without the constant threat of punishment.

Elephants exhibit typical pain-avoidance responses to the bullhook by recoiling or by trumpeting in fear.

In addition to bullhooks, trainers may use baseball bats, ax handles, pitchforks, and electric shock. Chains and ropes are used as restraints.

Author Carol Bradley recounts the words of George Arstingstall, the first American to breed elephants in captivity, in her book, Last Chain on Billie:

Don’t imagine that you can train an elephant with kindness. I ruled them all through fear, and not affection. … If I see a keeper becoming kind to an elephant I discharge him and hire another … the elephant hook has to be in constant use.

Sam Haddock was an elephant handler who worked at Ringling’s Florida breeding center for years and was heavily involved in training elephants. “I went after [the elephant] with a hot shot in the stockyard. I burned out two hot shots and fried him for about ten minutes. He was screaming and regurgitating water.” After beating another elephant for five minutes, “I took a break and then beat him more. I laid him down and hooked him repeatedly in his ear canal. The second beating lasted ten minutes. [The elephant] was screaming bloody murder.”

Haddock came to regret his career choice later in life, and his wife urged him to do the right thing and expose Ringling’s torturous treatment of elephants. He provided PETA with dozens of shocking photos of baby elephants bound and electro-shocked by trainers in order to force them to learn tricks.

Submission Is the Mission

The bullhook is designed to inflict pain. No circus could make elephants perform without it. Its appearance is so menacing that police charged a California animal rights activist with possessing a deadly weapon when she used a bullhook in an educational display at a circus demonstration to illustrate the barbaric treatment of performing animals. And while the Anne Arundel County (Maryland) Council was considering a ban on bullhooks, the public was barred from taking bullhooks into the chamber.

The federal Animal Welfare Act does not prohibit bullhook use, but more and more local communities do, including Austin, Texas; Los Angeles and Oakland, California; Richmond, Virginia; Spokane, Washington; and Minneapolis.