Update: The Royal Hanneford Circus recently agreed to pay a fine of $7,000 as a result of a 2014 incident in which three elephants escaped and ran amok during a performance that Hanneford produced in Missouri. It has not held a license to exhibit animals since 2005 and rented the three elephants from Carson & Barnes Circus, which the U.S. Department of Agriculture (USDA) had already fined over the incident, described in more detail below.

What makes this unusual is that typically only the exhibitor (i.e., Carson and Barnes) of the animals is fined in such cases. The USDA rarely fines the producing circus (in this case, Royal Hanneford).

Carson & Barnes Circus is notorious for failing animals, from viciously beating elephants until they screamed to allowing elephants to escape and run amok. The USDA filed a lawsuit against the circus for two 2014 incidents that put both elephants and the public at risk, and the circus will pay a $16,000 fine to settle the case. This is great news, but since the USDA usually imposes the bare minimum penalty (the circus could have been fined $60,000), violators view these settlements as just the cost of doing business. 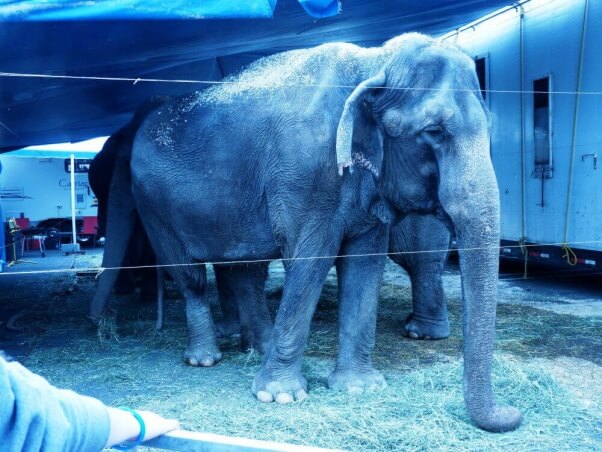 While performing in Missouri, elephants Kelly, Viola, and Isa were frightened by the crowd, bolted, and were on the run for 45 minutes. Kelly and Viola both sustained minor injuries. A month later in Pennsylvania, their handlers stopped to water them, and an adult and child were permitted to approach them and take a photo. Elephants who are forced to perform in the circus and spend their lives in chains have been known to snap, so this is no small matter.

Carson & Barnes was fined almost $3,800 in 2012, when Viola was hurt in another attempted escape. It was one of 10 violations included in the small fine.