Vegan fast food was put to the test in 2021. In a bid to keep up with the unstoppable rise in demand for animal- and planet-friendly eats, fast-food chains tested so many vegan options this year that we could barely keep up. And we weren’t the only ones—the fast-food companies themselves could barely keep up with the success of their own vegan offerings. Sold-out vegan orange chicken, sales of fish-free seafood entrées by a formerly animal-unfriendly fast-food chain, the first-ever plant-based McDonald’s burger served at more than one location … it can all only mean one thing: Vegan fast food in 2022 is going to be epic!

Was 2021 the best year yet for vegan fast food? Take a walk with PETA down memory lane, then you decide:

Following a decades-long PETA campaign, McDonald’s appears to be done denying how massively popular animal-free foods are. In 2021, the chain began testing its new McPlant burger (developed with Beyond Meat) at select stores in California, Iowa, Louisiana, and Texas. (This could be a big win for cows—just be sure to order yours without cheese and mayonnaise to make it vegan.) McDonald’s will reportedly launch the McPlant burger nationwide in early 2022.

Panda Express Goes Above and Beyond, Too

Not only did Panda Express launch its Beyond the Original Orange Chicken regionally in 2021, the popular fast-food chain also expanded its trial this year. Made with Beyond Meat chicken and featuring both a crispy breading and a honey-free sauce, the vegan version of one of its most popular dishes is now available at 70 Panda Express locations across 10 states. (Find out where it’s being offered near you with Panda Express’ locator tool.) Panda Express Executive Director of Culinary Innovation Jimmy Wang called the test “one of Panda’s most successful regional launches to date,” adding that the success “further reinforces the desire we’re seeing from our guests for more diverse and plant-based options.” Mmm … is that vegan broccoli beef we smell?

Following pressure from PETA—including billboards and vegan fish giveaways with mermaid mascots—and after receiving e-mails from tens of thousands of our supporters, Long John Silver’s dove right into the wonderful world of vegan seafood, becoming the first major chain to offer faux fish and cruelty-free crab, testing and selling out of Good Catch’s crispy vegan fillets and savory vegan crab cakes earlier this year. “The oceans are in trouble, sensitive aquatic animals don’t want to die for human dinners, and this move brings us one step closer to the sustainable vegan planet we all need,” PETA Executive Vice President Tracy Reiman said in response to the successful test. PETA hopes that in 2022, the crabless cakes and vegan fish fillets will be put on the menu for good. Please urge Long John Silver’s to add the options permanently and nationwide!

Taco Bell has long been a go-to for vegans, and in 2021, it stepped up its game. The chain is expanding its “Cravetarian” menu and tested its new “boldly seasoned” vegan beef option at 95 Detroit-area locations. Should Taco Bell expand a vegan beef option nationwide as a permanent menu item (and PETA’s sure that it will), the chain will spare the lives of countless cows. In summer, we also saw Taco Bell test a meatless Naked Chicken Chalupa shell. And earlier in the year, the chain announced that it would be working with Beyond Meat to develop other meatless options. Sounds like we can look forward to even more great items in 2022. 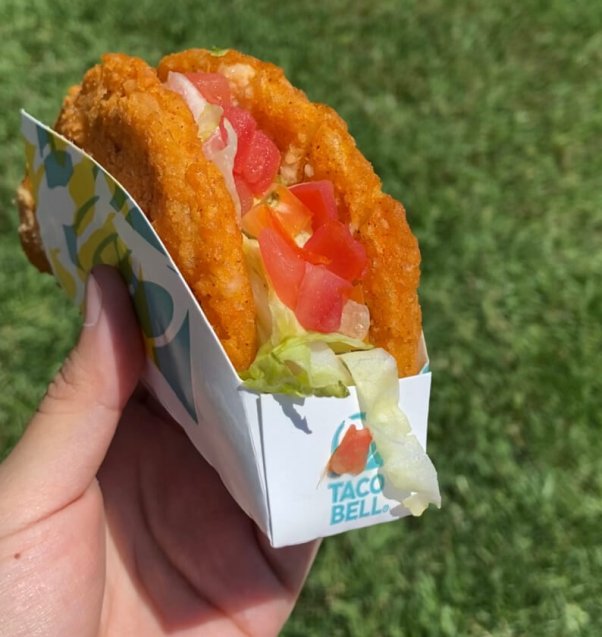 Starbucks Comes Through With Some New Vegan Goods

While we’re still impatient for Starbucks to drop its bogus vegan milk upcharge, the coffee chain did introduce a few notable vegan options to its menu this year. The nationwide addition of a Chickpea Bites & Avocado Protein Box was an exciting moment for vegan Starbucks customers. The chain tested vegan whipped cream (made from lentils!) in Seattle, too. In November, we were also given the Iced Sugar Cookie Almondmilk Latte, a festive new holiday drink that’s vegan by default, even down to the green and red sprinkles on top (which contain only sugar and vegetable-based coloring, not insects). In addition to the sprinkles, it features a sugar cookie–flavored syrup, Starbucks’ Blonde Espresso Roast, and almond milk. Help us make 2022 the year Starbucks stops charging extra for vegan milk in its other drinks!

Peet’s Coffee Gives Starbucks a Run for Its Blood Money

While Starbucks drags its feet testing an animal-free breakfast sandwich, Peet’s Coffee—another nationwide coffee chain—launched the Everything Plant-Based Sandwich at all locations this year, after a push from PETA and you. The meat- and egg-free breakfast sandwich comes with a plant-based egg, seasoned Beyond Meat breakfast sausage, and a slice of Violife cheddar cheese on a thin “everything” bagel. In 2021, the chain also added a vegan-by-default Horchata Cold Brew Oat Latte, the perfect accompaniment to its animal-friendly sandwich. 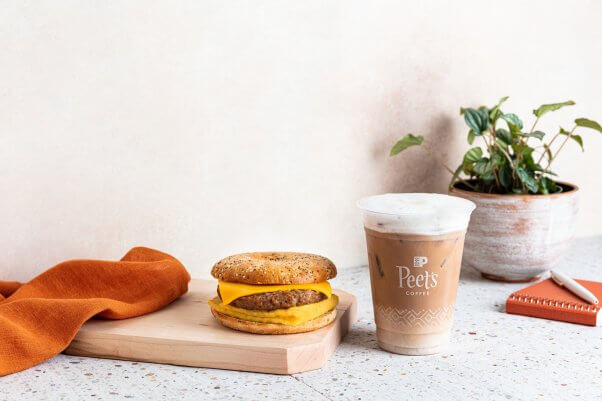 The ‘World’s Most Wanted Wiener’ Is Officially a Vegan One

When you hear “Wienerschnitzel,” you may not immediately think “vegan-friendly.” But in 2021, “the world’s largest hot dog chain” could deny the vegan revolution no more. This year, select Wienerschnitzel locations in California, New Mexico, and Texas tested a new vegan Field Roast Signature Stadium Dog. It could be ordered as part of three menu options: the Backyard Veggie Dog, which came with a pickle spear, tomato, ketchup, and mustard and could be made vegan by ordering it without the cheese; the Barbeque Veggie Dog, with barbeque sauce, a pickle spear, and onions; and the Chicago Veggie Dog, with a pickle spear, tomato, sport peppers, onions, relish, mustard, and celery salt.

This year, Little Caesars began offering the Planteroni Pizza, which comes topped with Field Roast vegan pepperoni. To make it vegan, order it without cheese—we suggest adding your own vegan cheese at home. You can also add the pig-friendly topping to any “create your own” pizzas or perhaps to a cheeseless veggie pie. Here’s hoping Little Caesars will add more vegan fast-food options to its menus in 2022—perhaps Field Roast’s delicious Chao vegan cheese shreds.

Everyone knows and loves Chipotle’s Sofritas. This year, the Mexican grill upped its vegan fast-food game with a spicy vegan chorizo option made from pea protein and flavored with ancho chilies, chipotle peppers, tomato paste, crushed garlic, Spanish smoked paprika, and olive oil. The option is currently being tested at locations in two cities: Denver and Indianapolis. But with reviews like “it did not disappoint,” we’re certain it won’t be long before Chipotle expands the pig-free chorizo nationwide.

While Long John Silver’s is dipping its toes in the vegan waters, California Fish Grill is diving right in. With plant-based items like the “Ahi” Poke Bowl, Grilled “Shrimp” Plate, Dynamite “Shrimp” Bowl, and Battered “Fish” & Chips, it’s ofishally one of our favorite spots for fish-free vegan fast food. With more than 45 locations in Arizona, California, and Nevada, we’re eager to watch it become a favorite among other West Coasters, too.

These chain restaurants and others are extremely popular, which is why PETA works so hard—talking with companies behind the scenes, hosting action alerts on PETA.org, and getting loud on social media—so that consumer activism and saving lives can be easy for everyone. Click below to join us in urging Domino’s, Papa John’s, KFC, Applebee’s, Sonic, Chili’s, and others to give the people what they want: meat-, dairy-, and egg-free burgers, pizza, and more.

Help Get More Chain Restaurants to Add Vegan Options, Too

And help PETA spread the word! Click below to remind your family, friends, and other followers of all the exciting vegan fast-food additions of 2021: