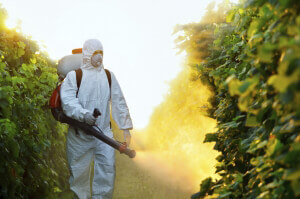 The United States government requires extensive animal poisoning tests for every pesticide manufactured or sold in the country. An estimated 7,400 or more rats, mice, rabbits, birds, fish, and dogs are killed in laboratory experiments just to satisfy government data requirements for a single pesticide “active ingredient.” This does not include animals used in testing that is required for other ingredients in a pesticide formulation or the final formulation itself. Virtually none of the animal tests required have ever been properly validated to ensure that their results are reliable and relevant to humans or other species of concern.

The Environmental Protection Agency (EPA) Office of Pesticide Programs (OPP) regulates all products used or sold in the U.S. or imported into the country that are designed to manage, destroy, attract, or repel “pests.” Pesticides include synthetic chemicals, genetically engineered toxins, natural substances such as pheromones and garlic, and even living organisms such as insects, bacteria, and viruses.

PETA has long pressured OPP to move away from animal testing, and we are seeing some promising progress. OPP has made significant strides in developing ways to use fewer animals in acute toxicity testing. These tests involve feeding a toxic pesticide to animals, applying it to their skin, and forcing them to inhale it. The objective is to determine the amount of pesticide that will kill at least 50% of the animals through the oral, dermal, and inhalation methods of exposure. Other acute toxicity tests involve placing pesticides in the eyes or on the skin of animals to observe the degree of irritation caused as well as tests to see whether a pesticide causes an allergic skin reaction.

Working with PETA scientists, the regulated industry, and other stakeholders, OPP adopted several non-animal testing approaches. It now accepts a non-animal eye irritation testing strategy for antimicrobial cleaning products (germ-killing household cleaners, disinfectants, and anti-bacterial soaps) and will consider alternative eye irritation methods for use with conventional pesticides (insecticides, herbicides, fungicides, etc.) on a case-by-case basis. Work is underway to validate the methods for routine use with all types of pesticides. Substituting alternative methods such as these for the cruel Draize test spares rabbits the suffering that they endure when harmful chemicals are placed in their eyes.

OPP now also accepts animal-free approaches to assessing skin allergy, which allows companies to avoid tests using guinea pigs or mice. In another effort, it evaluated its requirement for conducting both oral and dermal acute toxicity tests on animals when companies apply to register new pesticide formulations. It found that in nearly all cases, the oral results could be used to predict the dermal results, and it has issued draft guidance that allows industry to request a waiver for the dermal toxicity test. It is also investigating the use of an equation that “adds” the known toxicities of the ingredients in new pesticide formulations instead of performing a new animal test.

Another way that PETA interacts with OPP is through its Pesticide Program Dialogue Committee, a federal advisory committee composed of a diverse group of stakeholders who provide the EPA with feedback on various regulatory, policy, and implementation issues. This committee affords us opportunities to network with companies, environmental groups, and other stakeholders as well as the chance to advise OPP on ways to reduce its reliance on animal testing.

PETA is currently collaborating with OPP on finding additional ways to replace animal tests with more efficient and effective animal-free approaches. While OPP has made progress in exploring alternatives for some toxicity tests, PETA continues to encourage it to develop and make greater use of non-animal methods and testing strategies for all required toxicity tests.