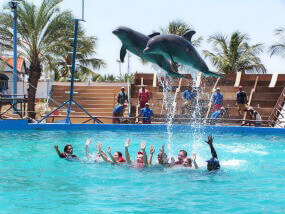 Dolphins are dying to entertain you.

Vacationers who are captivated by dolphins often unwittingly contribute to a cruel industry by buying a “swim-with-dolphins” excursion. These fascinating marine mammals live in misery long after travelers return home with their pictures and memories. In the wild, dolphins swim vast distances every day in extended pods. They use echolocation to navigate in order to determine location and distance. In captivity, even the largest pool feels like a prison to them.

Dolphins have distinct personalities, can recognize themselves in mirrors, and can think about the future. They seek out others whose company they enjoy and avoid those they don’t. An Emory University scientist determined that the relative brain size of bottlenose dolphins is second only to that of humans and that the complexity of the neocortex of many dolphins is comparable to or perhaps even exceeds that of the human brain.

“The scientific research suggests that dolphins are ‘non-human persons’ who qualify for moral understanding as individuals.”

An in-depth study conducted by the Whale and Dolphin Conservation Society found that dolphin-assisted therapy (DAT) programs are fundamentally flawed because there is no conclusive scientific evidence that they have any long-term benefit.

“Despite DAT’s extensive promotion to the general public, the evidence that it produces enduring improvements in the core symptoms of any psychological disorder is nil … there is little reason to believe that DAT is a legitimate therapy or that it constitutes much more than entertainment.”

Laws: Few and Far Between

Although captive dolphins in the United States are afforded some minimal protections, programs outside the U.S. are often governed by few, if any, laws. Throughout the Caribbean, dolphins are kept in small pools or polluted sea pens. Debris and trash left in or near these pools, such as plastic bags, sunglasses, or the paper used to wrap the “fish food,” can be ingested by the animals, causing gastrointestinal problems or even death. Driven by greed, many facilities operate almost continuously, giving the animals little respite from a constant stream of tourists.

Cruise liners are a significant source of customers for “swim-with-dolphins” programs because cruise lines earn considerable revenue by promoting these onshore excursions.