A PETA-endorsed “swim with dolphins” event? Only with Delle, Edge Innovations’ ultra-realistic robotic dolphin! On May 27, a group of excited kids met and swam with the animatronic marine mammal, who looks, feels, and behaves like a real dolphin. With Delle’s first meet-and-greet, Edge Innovations has taken the future of animal-friendly marine parks to the next level: These kids were able to learn more about highly intelligent dolphins, and no one had to be confined to a barren concrete tank, limited to swimming in small circles, or used as a breeding machine.

Catch Delle in action as she makes a splash with the public:

Torn away from their families and kept in small, prison-like pools, dolphins are harmed by programs that allow humans to swim with them. But what if you could experience swimming with them without the harm? A first-of-its-kind robotic dolphin could make all our dreams—most importantly, those of dolphins—come true.

Roger Holzberg and Walt Conti of San Francisco–based Edge Innovations have created a jaw-dropping animatronic dolphin that has the potential to upend the cruel captive marine mammal industry. These visionary designers have thrown a lifeline to sensitive dolphins exploited in “swim with dolphins” encounters and archaic marine parks. We’re honoring Holzberg and Conti with an Innovator for Animals Award for making waves with the high-tech invention. 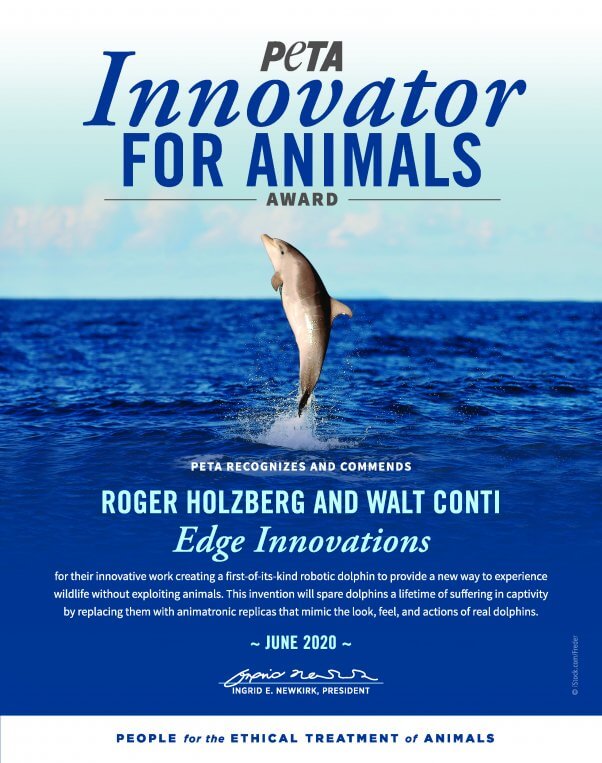 PETA Australia is also sending an Innovator for Animals Award to Melanie Langlotz of Geo AR Games in New Zealand for her pivotal work with Edge Innovations to create the animatronic dolphin.

“But I love dolphins!” will never be an OK excuse to pay to swim with captive, live ones.

If you’ve watched The Cove, you already understand why we’re so grateful to innovators such as Holzberg, Conti, and Langlotz. Thanks to them, there is an end in sight to cruel “swim with dolphins” programs, for which young dolphins are traumatically abducted from their ocean homes and frantic mothers, sometimes illegally. 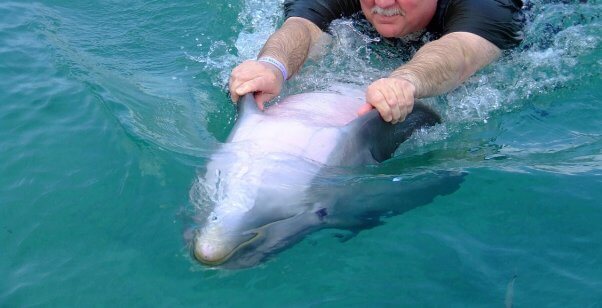 Many dolphins exploited in “swim with dolphins” encounters are forcibly ridden by strangers who grab their fins.

Ones considered less attractive may be killed, and the others are sold to parks around the world, where they’re frequently confined to cramped tanks and are unable to swim long distances or escape conflicts with other frustrated dolphins. The stress of captivity can result in painful ulcers, infections, and even premature death.

In marine parks such as SeaWorld, highly intelligent, far-ranging dolphins are forced to swim in circles in small, chemically treated tanks and are used as breeding machines to create generations of captive animals. Unwilling female dolphins are dragged out of the water and forcibly impregnated, sometimes after being drugged so that they can’t fight back. Some endure this process repeatedly, only to have their babies die or be shipped to other SeaWorld parks.

Dolphins Don’t Belong at SeaWorld! Click Here if You Agree

So what are dolphin lovers to do while we wait (im)patiently for the new robotic dolphin to go mainstream? There are loads of cruelty-free opportunities to see these intelligent, graceful animals in their natural habitat, including hitting the beach, kayaking, stand-up paddleboarding … 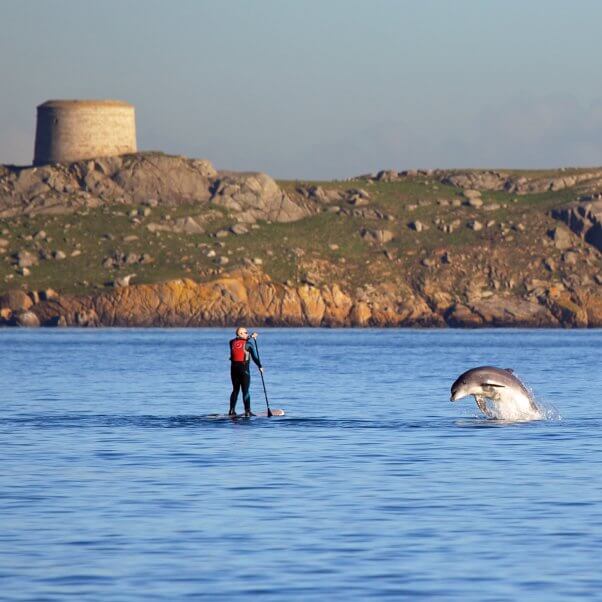 … hopping on a boat, snorkeling, or scuba diving. Click on the button below to discover even more ways to see dolphins without hurting them: