People for the Ethical Treatment of Animals (PETA) opposes the use of elephants in circuses. Circuses subject elephants to cruel training and constant confinement. “Positive reinforcement” is little more than a myth propagated by the circus industry. Trainers dominate animals using painful punishment to ensure that they perform tricks on command.

An October 11, 2002, editorial in the Detroit Free Press, entitled, “Circus Entertainment Comes at the Expense of Animals,” by Ron Kagan, director of the Detroit Zoo, stated, “Living on the road, circus animals are not able to have either appropriate physical or social environments. Constant travel in the back of a truck or train, daily and prolonged restraint—often including chaining or confinement in small barred cages—and rigorous physical training and discipline are all very stressful. … In my view, anyone who strikes an elephant—or any other animal—should be prosecuted for animal cruelty.”

Circuses are regulated by the federal Animal Welfare Act (AWA), which is enforced by the U.S. Department of Agriculture (USDA). The AWA establishes only bare-minimum guidelines for certain species. For example, the AWA does not protect horses, ponies, birds, rats, mice, reptiles, or amphibians. The AWA does not prohibit the use of bullhooks, whips, electrical shock, or other commonly used devices that cause pain and suffering. The AWA also does not address the special physical and social needs of elephants. The USDA may inspect circuses as infrequently as once per year.

A federal exhibitor license does not exempt a circus from state and local laws. Because federal laws are weak and poorly enforced, many state and local governments have enacted stricter laws to protect animals and the public, and a growing number of communities are banning the use of exotic animals in traveling shows.

In the past, circuses often took advantage of the fact that animal control officers, humane investigators, and state wildlife agents were unfamiliar with exotic species, such as elephants. Because of heightened public awareness and evidence of routine mistreatment in circuses, local authorities are now giving closer scrutiny to traveling animal acts. As a result, local enforcement agencies that monitor circuses commonly find violations of municipal codes and humane laws.

Before the circus comes to town, establish a relationship with your local zoo and exotic animal veterinarians. When the circus arrives, make frequent, unannounced inspections. During the initial visit to the circus, notify the person in charge that you are conducting an inspection. Do not allow circus personnel to intimidate or threaten you. Ask to review all paperwork, such as current permits, health certificates, and recent USDA inspection reports. Notify the USDA if your inspection reveals a new AWA violation or a previously identified violation that remains out of compliance.

Inspect the elephants first. Ask circus officials if the elephants have any injuries or illnesses. Walk around and closely examine each elephant. Check the elephants each day that the circus is in town. Arrive at least 30 minutes before performances and observe the animals during the shows and elephant rides and after performances.

It is very important to do your job as you normally would. Do not allow circus officials to influence your judgment. Be certain to take photographs and videotape as evidence of potential mistreatment.

Tips for Videotaping: Do not talk while filming. Slowly film the entire body. Zoom out and hold the camera steady on the entire elephant. Zoom in and film the elephant’s feet for several seconds. 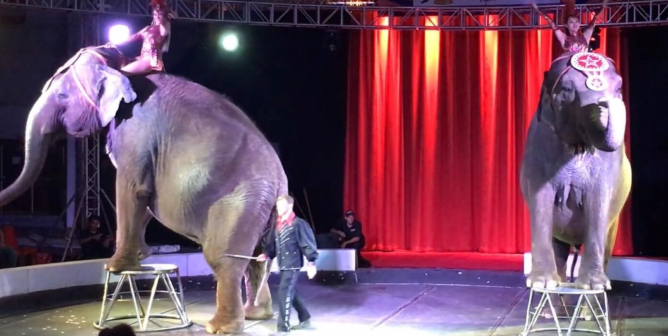