Every year, the global leather industry slaughters more than a billion animals. Most of the leather in the U.S. and Europe comes from India, China, and other countries that either have no animal welfare laws or have laws that go largely or completely unenforced. 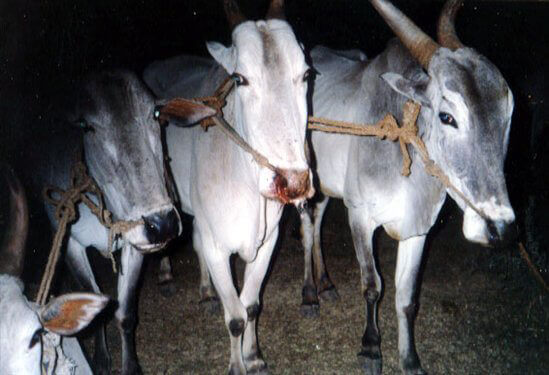 Years after a PETA investigation into the Indian leather industry prompted the Indian government to promise to make improvements in the transport and slaughter conditions endured by cows and other animals killed for their skin, PETA investigators have found virtually no improvements. The animals are still grotesquely abused in ways that violate Indian law and shock the consciences of all kind people.

As India’s own animal protection laws are blatantly ignored, unsanitary slaughterhouses continue to pollute the environment; unlicensed, illegal slaughterhouses remain in operation; and the widespread abuse of animals persists.

In direct violation of the Constitution of India, cows (whom many Indians consider sacred) are marched and driven to slaughter for days without food or water. Those who collapse from exhaustion while walking have their eyes smeared with chili peppers and tobacco and their tails broken in an effort to keep them moving.

Commercial vehicles crossing Indian state lines are required to pay taxes, so animals are often transported by truck within the state and walked across the border, where they are loaded back into severely crowded trucks. Indian law requires that not more than six cattle be transported in a truck at one time, but this law is routinely ignored. However, to avoid any problems at state borders, some cows are dragged off the trucks, marched over the border, and then loaded back into the trucks. Many cows are trampled or gored in these extremely crowded, illegal transport trucks during the long journey to slaughter.

Because India’s animal transport and slaughter laws are not enforced, many of the animals used for leather are so sick and injured by the time they arrive at the slaughterhouse that they must be dragged inside. Once inside, their throats are cut—often with dirty, blunt knives and in full view of one another—on floors that are covered with feces, blood, guts, and urine. Some animals are even skinned and dismembered while they are still conscious.

If you’re wearing leather, it most likely came from China, the world’s top leather exporter. In addition to the cattle, sheep, and other animals who are killed for leather in that country each year, an estimated 2 million cats and dogs are killed there annually for their skins.

Confined to wire cages in which they can barely move, these animals are skinned—sometimes while still alive—and hacked apart, piece by piece, until they bleed to death. Many items made from the skins of dogs and cats are bought unknowingly by consumers, because they’re often intentionally mislabeled and don’t accurately indicate their origins.

With so many stylish synthetics now available, there is no excuse for supporting animal abuse. The best thing that you can do to help animals killed for their skin is to boycott all leather products and urge everyone you know to do so as well.