You may love Finding Nemo, but no one likes finding nematodes in their food.

Eating fish supports an industry that kills trillions of fish each year by impaling, crushing, suffocating, and gutting them while they’re still conscious—and it puts you at risk of being infected by roundworms (nematodes), flatworms, and tapeworms. The odds that at least one of these parasites is lurking in your fish “meal” may be higher than you think. 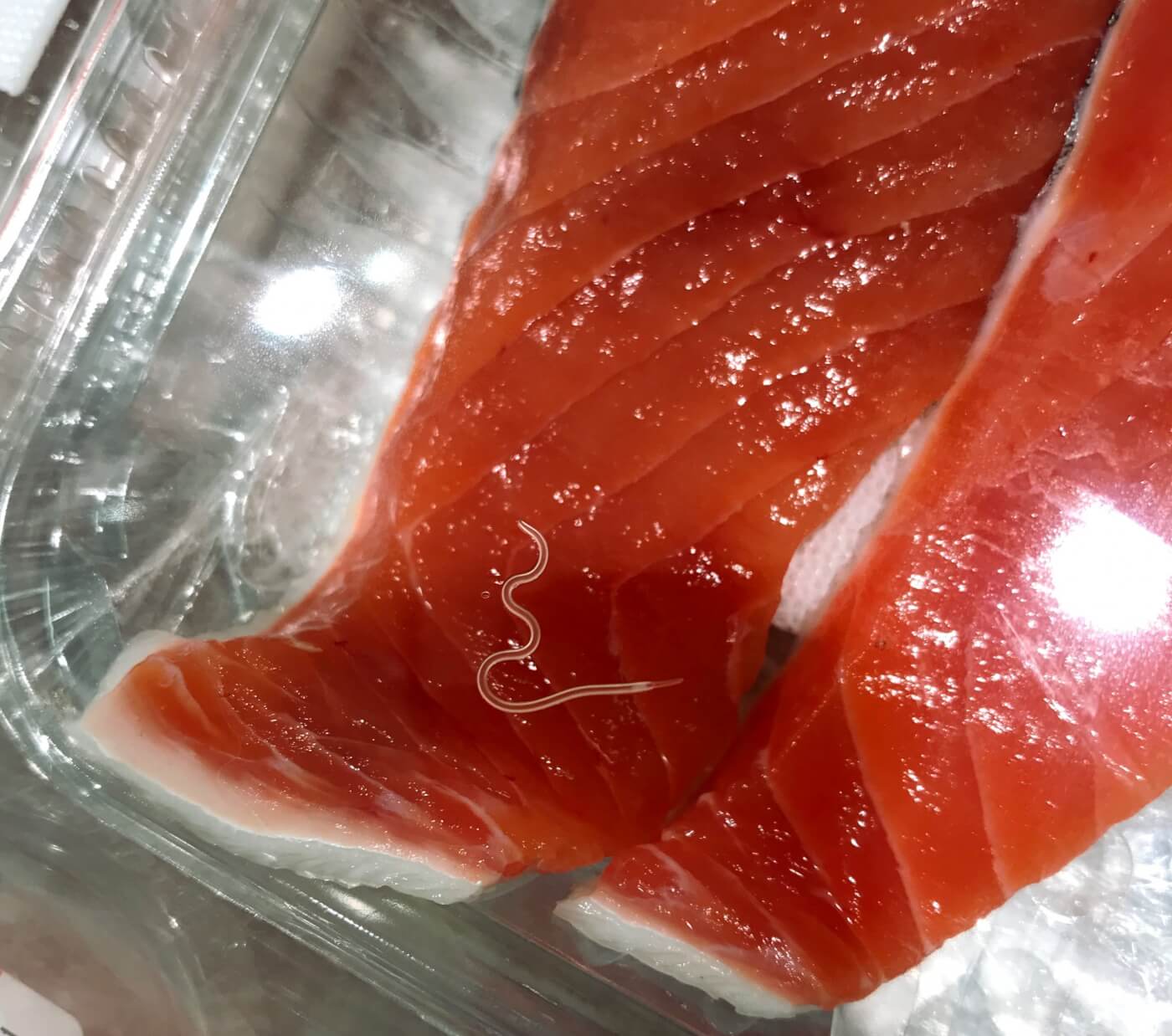 Are There Parasites in All Fish?

Every kind of wild-caught fish can contain nematodes. One study found that more than 90% of certain types of wild-caught fish were infected with nematode larvae. Another concluded that one type of worm infecting fish around the globe is now 283 times more abundant than in the 1970s. This number is only expected to grow—researchers found that higher temperatures caused by climate change will significantly increase the amount of parasites found in wild-caught fish.

Horror stories of people finding worms in their salmon shouldn’t come as a surprise. Data cited by the British Columbia Centre for Disease Control suggests that 75% of wild Pacific salmon are infected with anisakid nematodes. In another study, researchers in Alaska found nematode infestations in every single fresh-caught salmon they examined.

What about fish who are raised on aquafarms, where fish farmers cram them into filthy enclosures and sometimes starve them for days? If you guessed that the high-stress, crowded, and unsanitary environments on aquafarms lend themselves to an increased risk of parasitic infestations, you’d be correct.

Worms are so rampant in these fish factories that farmers use antibiotics, pesticides, or chemicals to try to keep infection and disease in check. One study even concluded that “it is rare to ﬁnd any aquaculture species that is not troubled by at least one problematic parasite during the farming process.” And fish farms aren’t exactly forthcoming about their parasitic outbreaks—researchers found that “they are frequently under reported, hiding the severity and impact of certain parasites.”

Is It Safe to Eat Fish With Parasites?

Consuming parasites can cause health issues ranging from extremely unpleasant to fatal. If your sushi comes loaded with roundworms, prepare to set up camp in your bathroom while you endure symptoms like abdominal pain, nausea, vomiting, and bloody stools. Tapeworm infestations cause similar symptoms, but they can last even longer (in some cases, for decades), and flatworm infections can cause severe liver and lung disease, anemia, and even death.

Is a plate of fish flesh really worth risking debilitating health issues or even death? Spare your health and fish’s lives by switching to vegan seafood—which has all the great taste with none of the tapeworms or other contaminants found in real fish.

Vegan seafood brands such as Vegan ZeaStar, The Plant Based Seafood Co., Ocean’s Halo, and others offer fish-free delicacies like vegan tuna, fish sauce, and crab cakes, which can be found at popular grocery chains. Or experiment with making your own tasty vegan seafood at home, with recipes such as veggie tuna salad and watermelon sesame poke bowl.

Fish are smart and social, and they don’t want to be killed for food. Empathize with aquatic animals by refusing to eat them and by encouraging seafood restaurants like Long John Silver’s and Captain D’s to sell vegan seafood.