Like the beloved characters in Charlotte’s Web and Babe, real pigs are intelligent and sensitive, each with his or her own unique personality. But pigs raised for food in real life are treated far more cruelly than their fictional counterparts in these tales.

Almost all of the millions of pigs killed for food in the U.S. every year are raised on crowded, filthy factory farms before they’re shoved and prodded onto trucks bound for slaughter.

Most mother pigs in the U.S. spend their entire adult lives confined to cramped metal crates. They never feel the affectionate nuzzle of a mate, and their natural desire to build a cozy, comfortable nest is thwarted. Instead, they’re surrounded by cold metal bars and forced to lie on wet, feces-covered floors.

When they’re old enough to give birth, female pigs, or sows, are artificially inseminated and imprisoned for their entire pregnancies in “gestation crates,” cages that are just 2 feet wide and too small for them even to turn around or lie down comfortably. They often experience health problems, such as ulcers and pressure sores, from lack of movement—and worse. One worker describes how a mother pig with a broken pelvis was treated:

[My supervisor] kicked her and then grabbed her by both of her ears and attempted to drag her out of the gestation crate in the breeding barn. She screamed in pain and protest .… [He was] riding her like a surfboard with one leg on her back and one on her neck. He then grabbed her by her tail, lifted her body, and forced her to walk out of her crate. As she did this, it was a horrific sight. The back half of her body was unable to move …. [My supervisor] was then trying to kick her and push her to keep her still as he shot her. She turned to the sows in crates alongside her as if asking for help. They kissed and sniffed, and then she was shot.

After giving birth, mother pigs are moved to “farrowing crates,” enclosures similar to gestation crates, with only a tiny additional concrete area on which she can nurse her piglets. They are then returned to gestation crates and impregnated again, continuing the cycle of forced breeding and imprisonment.

This intensive confinement, loneliness, and deprivation often causes mother pigs to go insane, which is manifested in abnormal, neurotic behavior, such as incessantly chewing the air, biting cage bars, and pressing on water bottles. After three or four years, their bodies are exhausted—even though they are still quite young—and they are shipped off to slaughter.

PETA campaigns to stop factory-farming abuses by supporting legislation that abolishes intensive-confinement systems. McDonald’s, Chipolte and Target are just a couple of companies that have said they will stop buying from farms that use gestation crates. Smithfield Foods phased out the use of the crates in the US by the end of 2017 and plans to do the same for its international farms by 2022. In the meantime, voters in Florida, Arizona, California, Colorado, Maine, Massachusetts, Michigan, Ohio and Rhode Island have banned the use of gestation crates. In Canada, the crates are projected to be phased out of use by 2024, although the industry is pushing to delay that conversion until 2029.

Babies Torn From Their Mothers and Mutilated 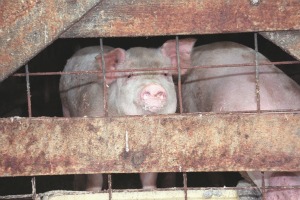 On factory farms, piglets are taken away from their mothers when they’re less than a month old. In nature, they would stay with their mothers for several months.

Piglets’ tails are cut off, their teeth are often clipped in half, their ears are mutilated, and males’ testicles may be cut off—all without any pain relief. They’re crammed into pens crowded with many other piglets, where they’re kept until they’re deemed large enough for slaughter. They’re given almost no room to move.

Clean by nature, pigs on factory farms are forced to live amid their own feces and vomit—and sometimes even amid the corpses of other pigs. Extreme crowding, poor ventilation, and filth lead to rampant disease. By the time they’re sent to slaughter, many farmed pigs are suffering from lung lesions caused by pneumonia. At any given time, more than half of them suffer from mange. And although they’re fed antibiotics to promote growth and prevent disease, many still die of viral infections.

Because of illness, a lack of room to exercise, and genetic manipulation that causes them to grow too large too quickly, farmed pigs often develop arthritis and other joint problems. Many are forced to live on slatted floors above giant manure pits, and they often sustain severe injuries when their legs get caught between the slats.

In order to save money, many farmers simply kill sick animals instead of giving them medicine or veterinary care. A PETA investigation found that a manager at an Oklahoma farm killed pigs by beating them with metal gate rods, and others were left to die without food or water. On most farms, unwanted “runts” are killed by “thumping,” or slamming their heads against the floor. 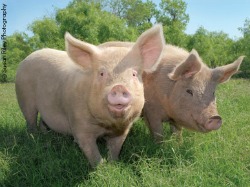 You can help put an end to this cruelty. Read PETA’s free vegan starter kit online or order a free hard copy, and start switching to delicious pork-free foods, such as veggie dogs, meat-free riblets, and tempeh bacon. We’ll send you all the tips and recipes that you’ll need to help you make the transition to animal-friendly fare.