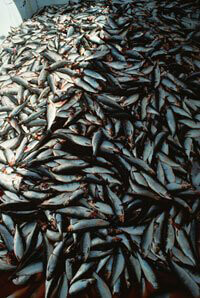 Commercial fishing is cruelty to animals on a colossal scale, killing hundreds of billions of animals worldwide every year—far more than any other industry.

Today’s commercial fishers use massive ships the size of football fields and advanced electronic equipment to track fish. These enormous vessels can stay out at sea for as long as six months, storing thousands of tons of fish onboard in massive freezer compartments.

This industry has decimated our ocean ecosystems. In fact, 90 percent of large fish populations have been exterminated because of the enormous numbers of animals caught.

Long-lining is one of the most widespread fishing methods. Ships unreel up to 50 miles of line bristling with hundreds of thousands of baited hooks. These are dragged behind the boat at varying depths or kept afloat by buoys and left overnight, luring any animal in the area to grab a free meal. Once hooked, some animals drown or bleed to death in the water, and many others struggle for hours until the boat returns to reel them in.

Large fish such as swordfish and yellowfin tuna, weighing hundreds of pounds each, are pulled toward the boat by the baited line. Fishers sink pickaxes into the animals’ fins, sides, and even eyes—any part that will allow them to haul the animals aboard without ripping out the hook.

Indiscriminate fishing practices such as long-lining kill hundreds of thousands of sea turtles, dolphins, birds, sharks, other untargeted fish, and other marine animals every year in U.S. territories alone.

Ranging from 300 feet to seven miles in length, gill nets are weighted at the bottom and held upright by floats at the top, creating what some have termed “walls of death.” Fish are unable to see the netting, and unless the mesh size is larger than they are, they get stuck. When they try to back out, the netting catches them by their gills or fins, and many suffocate. Others struggle so desperately in the sharp mesh that they bleed to death.

Because gill nets are set and then left unmonitored, trapped fish may suffer for days. Many bleed to death before the ship returns to take them out of the ocean. Those who make it to the deck alive are ripped out of the net by hand and suffocate or are cut open while still alive. Fish who were caught deep in the ocean suffer from decompression, and the extreme change in pressure can cause their stomachs to be forced out of their mouths and their eyes to bulge out of their heads.

Another fishing method involves the use of a purse seine, which is the primary net used for catching tuna and is also used for a variety of other fish species. This method has aroused public outrage because dolphins are sometimes caught in the nets. However, purse seines also kill millions of tuna—intelligent animals who are just as capable of feeling pain as dolphins are.

Historically, in order to catch tuna, fishers tracked pods of dolphins, who commonly swim with large tuna, and dropped a net into the water to surround the school of tuna. Today, rather than following dolphins, many commercial fishers use fish aggregating devices, floating rafts under which fish, sharks, and other marine animals—including sea turtles and rays—tend to congregate. The edges of the net are then slowly cinched together, trapping hundreds of tuna (usually weighing between 6 and 40 pounds each)—and other nearby animals—in the net, which is then drawn up and closed like a laundry bag.

If they’re still alive when they reach the deck of the boat, large fish such as tuna, cod, and haddock are completely conscious when their gills are slit and they’re disemboweled.

Bottom trawlers target species such as orange roughy, cod, and haddock—but they also kill many untargeted animals. By some estimates, they can catch 20 pounds of “bycatch” for every pound of targeted fish. Enormous bag-shaped nets are pulled along the ocean floor, catching every rock, piece of coral, and fish in their paths. Bottom trawling literally scrapes the ocean floor clean of life and is considered by some to be the underwater equivalent of clear-cutting forests. Zoology professor Dr. Les Watling, who has studied bottom trawling, calls it “the most destructive of any actions that humans conduct in the ocean.”

These nets rip hundreds of tons of animals out of the ocean, squeezing some of them so tightly against the sides that their eyes bulge and burst out of their skulls. For hours, trapped fish are dragged along the ocean floor with netted rocks, coral, and ocean debris. Many fish’s scales are completely ground off. When hauled out of the water, surviving fish undergo excruciating decompression. The intense internal pressure ruptures their swim bladders, pops out their eyes, and pushes their esophagi and stomachs out through their mouths.

When first developed, bottom-trawling nets were limited to parts of the ocean that had a soft sediment floor because rocks and coral tore holes in the netting, allowing fish to escape. Now, they have huge wheels, chains, or metal doors along their bottom edges. The heavy metal scrapes along the ocean floor, crushing everything in its path but keeping the nets just off the bottom to prevent them from being torn. This “advance” has dramatically expanded the range of bottom trawlers, killing fish and other animals who, until now, had been protected by their rocky habitats.

Regardless of the method used to catch them, if the fish are still alive at the end of their terrifying journey to the surface, their gills are cut and they’re left to bleed out or tossed onto ice to slowly freeze or suffocate—a horribly cruel and painful death for coldblooded animals, who can take a very long time to die this way.

Fishing Hurts Fish … and Other Animals, Too

Sea turtles, birds, seals, whales, sharks, and other “nontarget” fish who get tangled in nets and hooked by longlines are considered “bycatch” and thrown overboard. They fall victim to swarming birds or slowly bleed to death in the water.

Scientists estimate that more than 650,000 marine mammals—dolphins, whales, and porpoises—are seriously injured or killed every year by the commercial fishing industry. Shrimp trawlers discard 60 to 80 percent of their catch, making their business an extremely environmentally destructive practice.

Take PETA’s pledge to be vegan and eliminate fish and other animal-derived foods from your diet today. After a month, many people report feeling healthier and more energetic. Most of all, it means saving animals from cruelty.