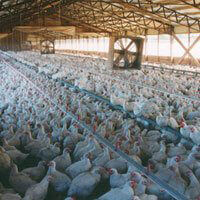 Chickens raised for their flesh—called “broiler” chickens by the meat industry—are typically confined to massive, windowless sheds that hold tens of thousands of birds each. While chickens can function well in small groups, where each bird is able to find his or her spot in the pecking order, it’s virtually impossible for them to establish a social structure in such large numbers. Because of this, the frustrated birds often peck at one another relentlessly, causing injury and even death.

Such intensive confinement also breeds filth and disease. A Washington Post writer who visited a chicken shed said that “[d]ust, feathers and ammonia choke the air in the chicken house and fans turn it into airborne sandpaper, rubbing skin raw.”

Michael Specter, a staff writer for The New Yorker, also visited a chicken farm and wrote, “I was almost knocked to the ground by the overpowering smell of feces and ammonia. My eyes burned and so did my lungs, and I could neither see nor breathe. … There must have been thirty thousand chickens sitting silently on the floor in front of me. They didn’t move, didn’t cluck. They were almost like statues of chickens, living in nearly total darkness, and they would spend every minute of their six-week lives that way.”

Because the birds are forced to breathe ammonia and particulate matter from feces and feathers all day long, many suffer from serious health problems, including chronic respiratory illnesses and bacterial infections.

Consumer Reports found that two-thirds of chicken meat analyzed was infected with salmonella or campylobacter—or both. The extremely high prevalence of dangerous contaminants in chicken flesh is largely from the filthy conditions in the sheds where the birds are raised. Factory-farmed animals are fed sub-therapeutic doses of antibiotics as “growth promoters.” Feeding animals low doses of antibiotics encourages the development of antibiotic-resistant bacteria—which people come into contact with when they handle or consume infected meat.

In addition to drugs, genetic selection is also used to make chickens grow faster and larger. The average chicken today is four times bigger than one in the 1950s, and chicken breasts are 80 percent larger than they were back then. Many chickens become crippled because their legs cannot support the weight of their bodies. It’s common for chickens to die from ascites, a disease thought to be caused by the inability of birds’ hearts and lungs to keep up with their rapid skeletal growth.

The welfare of the “breeding” animals who give birth to the more than 8 billion “broiler” chickens killed in the U.S. each year is largely ignored. Like the chickens to whom they give birth, “breeder” chickens are confined to filthy sheds without access to sunlight, fresh air, or anything else that they would enjoy in nature.

When these birds are very young—usually just 1 to 10 days old—hot blades are used to cut off a portion of their sensitive beaks so that they won’t peck each other out of the frustration caused by intense confinement. Sometimes their toes, spurs, and combs are also cut off. The birds are not given any painkillers to ease the agony of this mutilation, and many debeaked chickens starve to death because eating is too painful.

“Breeder” chickens are forced to live on factory farms for more than a year. Because they’re kept alive so much longer than “broiler” chickens, they face an even higher risk of organ failure and death as they grow larger and larger as a result of their genetically manipulated bodies. In an attempt to stunt “breeder” chickens’ growth, farmers drastically limit the birds’ feed, keeping them in a constant state of hunger and frustration.

After more than a year of deprivation and confinement, the bodies of these breeding birds are too worn out to produce as many chicks. Frail and exhausted, they are loaded onto trucks and sent to slaughter.

If you don’t want to support such cruelty, take PETA’s pledge to try vegan for 30 days. You’ll likely feel healthier and more energetic. If you stick with it, you’ll even reduce your risk of developing cancer. According to a 2006 Harvard study of 135,000 people, those who frequently ate grilled, skinless chicken had a 52 percent higher chance of developing bladder cancer than those who didn’t. To learn more about the health benefits of a plant-based diet, see PETA’s “Eating for Your Health” section.