Top 10 Reasons Not to Eat Chickens

Quite simply, chickens are the most abused animals on the planet. In the United States, approximately 9 billion chickens are killed for their flesh each year, and 305 million hens are used for their eggs. The vast majority of these animals spend their lives in total confinement—from the moment they hatch until the day they are killed.

Here’s a shocking video of your chicken dinner, in reverse:

These are our top 10 reasons to not eat chickens:

1. ‘Bird Brain’ Is a Compliment

An article in Scientific American titled “The Startling Intelligence of the Common Chicken” describes chickens as “cunning.” It goes on to say that they possess “communication skills on par with those of some primates and … [use] sophisticated signals to convey [their] intentions. When making decisions, [they take] into account … prior experience and knowledge surrounding the situation. [They] can solve complex problems and [empathize] with individuals that are in danger.” So who are you calling a “bird brain”? 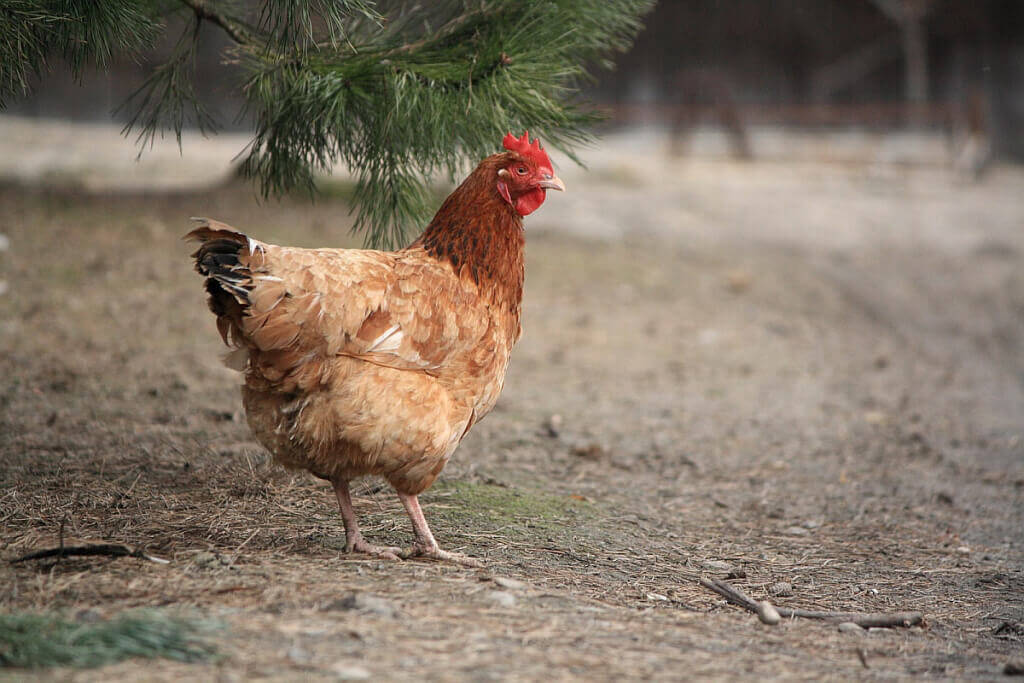 2. There is a High Risk of Human Exposure to Antibiotic-resistant Bacteria Through the Food Supply

Chickens raised for their flesh are often packed by the thousands into massive sheds and fed large amounts of antibiotics and drugs to keep them alive in conditions that would otherwise kill them. 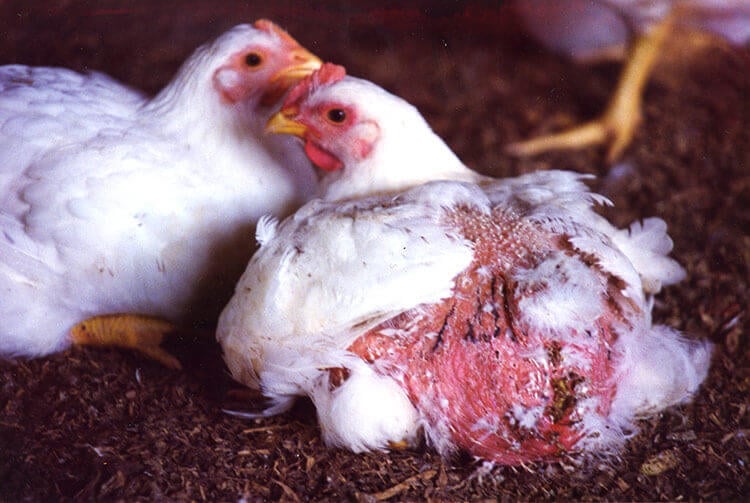 Recent documents created by the Food and Drug Administration (FDA) and made available as a result of a Freedom of Information Act request revealed that “none of these [antibiotic feed additives] would likely be approvable … for … livestock use if submitted today, under current FDA guidelines. Eighteen of the 30 reviewed feed additives were deemed to pose a ‘high risk’ of exposing humans to antibiotic-resistant bacteria through the food supply.” This reckless use of antibiotics makes drugs less effective for treating humans by speeding up the development of drug-resistant bacteria.

Only seven weeks after they’re born, chickens are crowded onto trucks that transport them to the slaughterhouse. Every year, tens of millions of chickens have their wings and legs broken in the process. They are trucked through all weather extremes, sometimes over hundreds of miles, without any food or water. At slaughter, chickens are hung upside down and have their throats slit, and they’re often scalded to death in defeathering tanks. 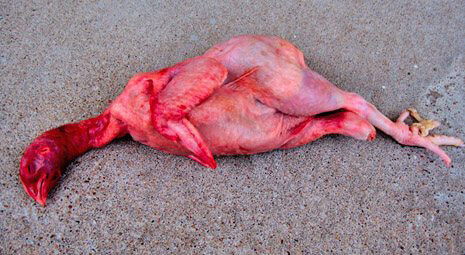 4. No One Stands Up for Chickens. That May Not Hurt Your Body, But It Will Hurt Your Soul

Most chickens spend their entire lives in filthy sheds with tens of thousands of other birds, each getting less space than a sheet of paper, where intense crowding and confinement lead to outbreaks of disease. Adult chickens can have trouble breathing and standing upright and will even topple forward because they’ve been bred to have abnormally large breasts. 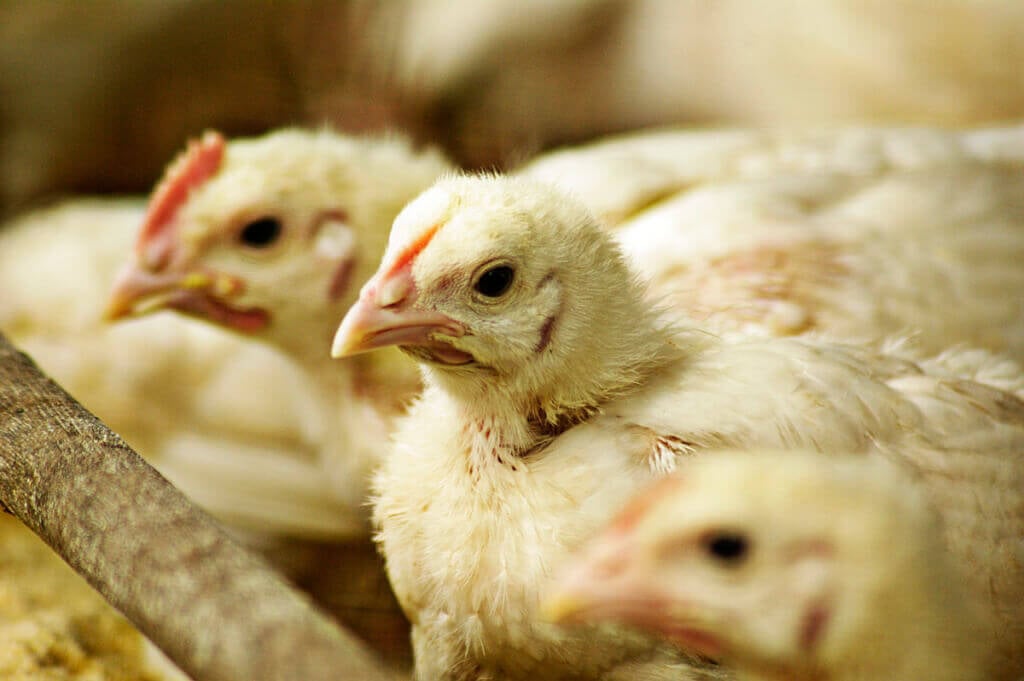 A U.S. Department of Agriculture (USDA) study found that more than 99 percent of broiler chicken carcasses sold in stores had detectable levels of E. coli, indicating fecal contamination. That means you are almost guaranteed to be swallowing actual POOP every time you chomp down on a dead chicken. Consumer Reports states that there are “1.1 million or more Americans sickened each year by undercooked, tainted chicken.” 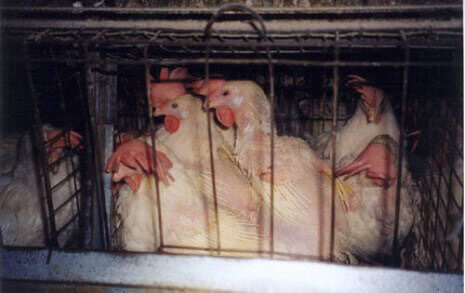 One disgusting example of the damage contaminated chicken can cause involved Foster Farms. Foster Farms was forced to recall chicken products that had been linked to an outbreak of an antibiotic-resistant strain of salmonella, which had been making people sick for more than a year. The Washington Post reported, “The [USDA] inspection reports include descriptions of mold growth, cockroaches, an instance of pooling caused by a skin-clogged floor drain, fecal matter and ‘Unidentified Foreign Material’ (which has its own acronym, UFM) on chicken carcasses, failure to implement required tests and sampling, metal pieces found in carcasses, and many more.”

6. Factory Farms Are Filled With Danger and Exploitation

According to the U.S. Department of Labor’s Bureau of Labor Statistics, slaughterhouse workers are more than three times more likely to sustain injuries while working than workers in other manufacturing jobs. They are also 30 times more likely to suffer from a repetitive stress injury than workers in other manufacturing jobs. The industry refuses to make working conditions safer by slowing line speeds or buying appropriate safety gear, which amounts to what Human Rights Watch calls “systematic human rights violations embedded in meat and poultry industry employment.” Workers are often forced to work 10 or more hours a day, and in order not to slow down, they have even been reported to defecate in their pants. 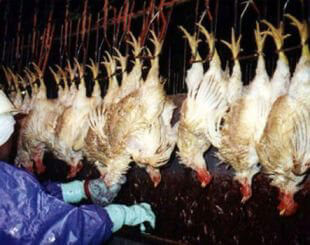 7. Chickens Used for Food Are Crippled and Dying of Thirst 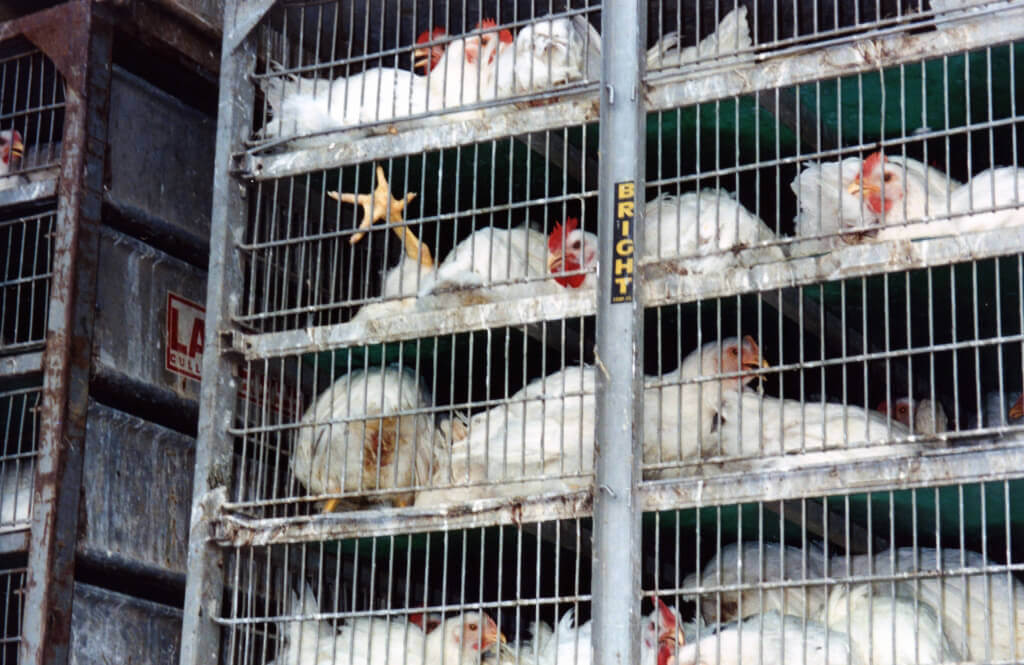 8. The Meat Industry is Actively Trying to Manipulate You

Companies want you to believe that labels like “free-range” and “organic” mean chickens were raised without cruelty. Regardless of what the egg cartons say, most hens raised for their eggs are subjected to cramped, filthy conditions until their egg production begins to wane—when they’re about 2 years old—and then they’re typically slaughtered. More than 100 million “spent” hens are killed in slaughterhouses every year. Every year, millions of male chicks are killed—usually in a high-speed grinder called a “macerator”—because they’re worthless to the egg industry. 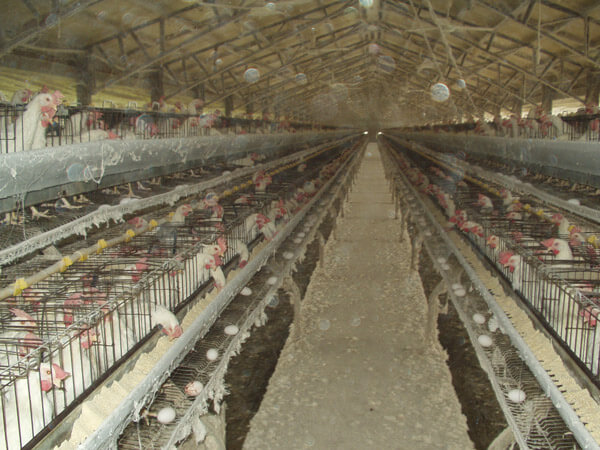 In his book The Meat Racket, Christopher Leonard details the effort that President Barack Obama made to control the meat industry’s power over rural America. In 2010, Obama attempted to make it easier for farmers to sue meatpackers. It was a noble effort to empower individual farmers, but Big Meat’s lobbyists pulled favors in Congress and succeeded in squashing the administration’s plan.

In a natural setting, a hen will cluck to her chicks before they even hatch while sitting on the eggs in her nest. They peep back to her and to each other through their shells. On factory farms, eggs are taken from the mother as soon as they are laid and placed in large incubators—a chick will never meet his or her parents. Hens prefer to have private nests hidden from predators and will often go without food or water in order to obtain a private nest. This demonstrates the fact that hens will sacrifice their own comfort if it means protecting their chicks. On factory farms, hens are forced to lay their eggs in barren metal cages, crammed together with five to 11 other birds. 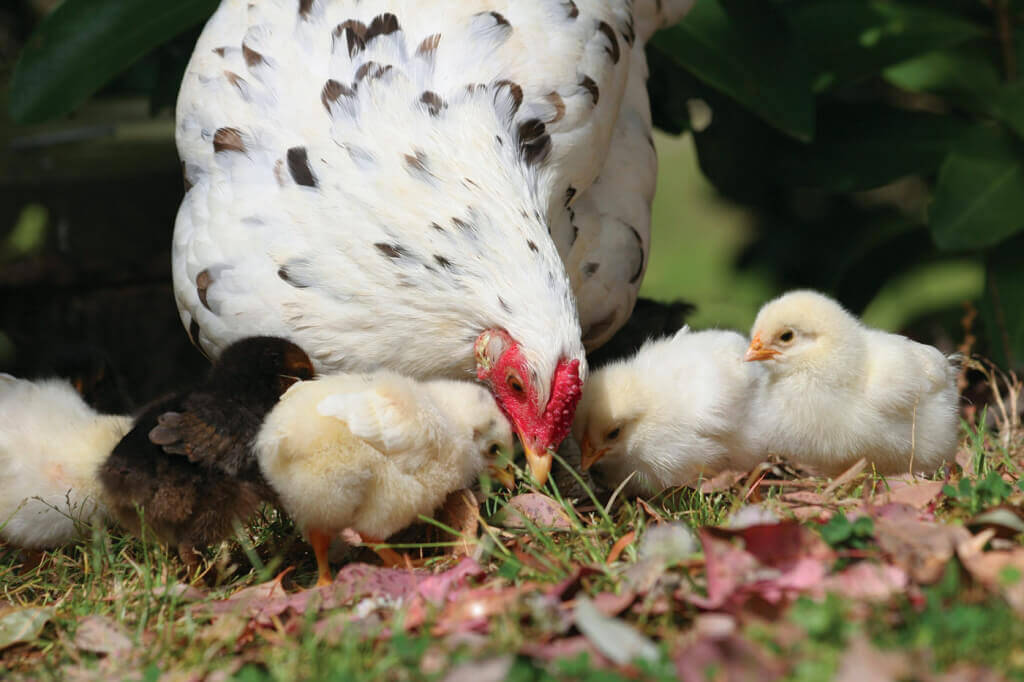 10. Industries That Raise and Slaughter Chickens Are Killing Our Environment

Raising 9 billion chickens for meat on factory farms each year produces enormous amounts of excrement. Oregon State University agriculture professor Peter Cheeke says that factory farming amounts to “a frontal assault on the environment,” which leads to widespread fecal land and water pollution. Because chickens are often fed massive amounts of antibiotics and additives, these chemicals are also found in high concentrations in their feces, which means that fecal pollution from chicken farms is especially disastrous for the environment. In Maryland and West Virginia, for example, scientists discovered that male fish are growing ovaries, and they suspect that this freakish deformity is the result of factory-farm runoff from drug-laden chicken feces. 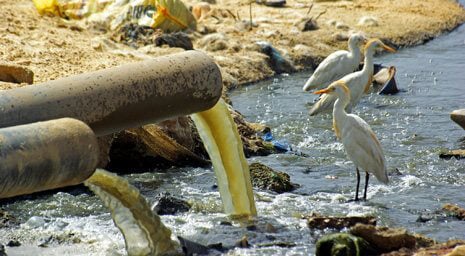 Better Than the Original!

Do you like the taste of chicken flesh but don’t like the suffering? No problem—there are so many alternatives available that you’ll never miss the cruelty! Try one of Gardein’s nine different varieties of meat-free chicken,  Boca Chik’n Nuggets, or any of these other vegan chicken products. These super-tasty foods are high in protein, cruelty- and cholesterol-free, and available at your local supermarket. Instead of eggs for breakfast, check out these delicious egg-free recipes that will blow your mind. Also, check out our egg-free baking tips. 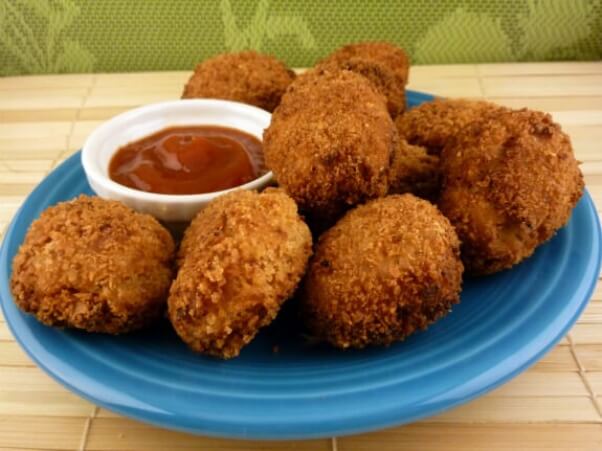