News reports tally the casualties of war, and monuments are erected to honor fallen soldiers, but the nonhuman victims of war—the animals who are shot, burned, poisoned, and otherwise tormented in military experiments and training exercises—are never recognized, nor is their suffering widely publicized.

Published experiments and internal documents obtained from the armed forces reveal that U.S. military agencies test all manner of weaponry on animals, from bombs to biological, chemical, and nuclear agents. Military experiments on animals can be painful, repetitive, costly, and unreliable.

For years, the U.S. Department of Defense (DOD) conducted so-called “wound labs,” during which conscious or semiconscious dogs and other animals were suspended from slings and shot with high-powered weapons to inflict injuries for crude medical training drills. In 1983, after PETA exposed and protested the Army’s plan to purchase dozens of dogs from animal shelters and shoot them on a firing range in Maryland, the military halted the program and permanently banned the use of dogs, cats, and primates in wound treatment experiments and training.1

However, the DOD and its contractors as well as companies working for the Department of Homeland Security continue to conduct highly secretive trauma training exercises (often referred to as “live tissue training”) in which thousands of other live animals—mainly pigs and goats—are maimed and killed each year.2 In a New York Times article, one service member described what happened to a pig during a trauma training exercise: “[Instructors] shot him twice in the face with a 9-millimeter pistol, and then six times with an AK-47 and then twice with a 12-gauge shotgun. And then he was set on fire. … I kept him alive for 15 hours.”3

In 2012, PETA released undercover video footage leaked by a whistleblower of a military trauma training course conducted by military contractor Tier 1 Group. In the video, course participants and instructors laugh and joke as live goats have their legs broken and amputated with tree trimmers, are stabbed, and have their internal organs pulled out.4 Anesthesia was inadequate, as indicated by the fact that some of the goats moan and kick during the mutilations. Following complaints filed by PETA, the U.S. Department of Agriculture cited and issued an official warning against Tier 1 Group for violating the federal Animal Welfare Act.5 For more on this case, please visit the PETA blog. 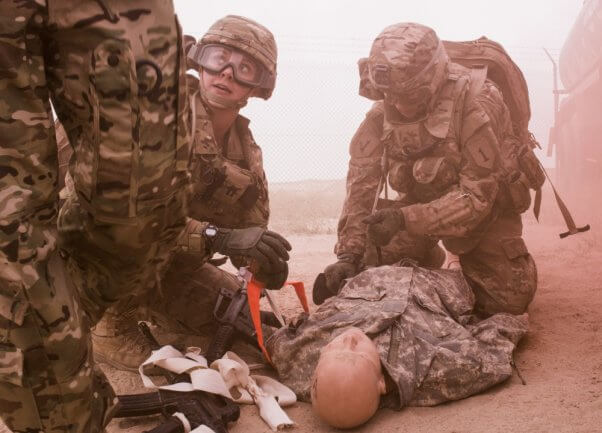 In 2012, PETA, along with current and former military doctors, published a study in the journal Military Medicine—the official journal of U.S. military surgeons—showing that nearly 80 percent of our NATO allies do not use any animals for military medical training.6 In an internal e-mail obtained by PETA, a top Army surgeon candidly admitted to colleagues that “there still is no evidence that [live tissue training on animals] saves lives.”7 Military regulations even require the use of “methods other than animal use” for training purposes when they are available, yet this policy is not being enforced.8

The military’s own research has shown the effectiveness of simulation technology for trauma training.9,10 Studies have repeatedly found that simulation-based trauma training is superior to crude drills on live animals both for teaching lifesaving medical skills and for improving trainee self-confidence.11-16 One study by military researchers explained that the use of animals for trauma training is problematic because of inherent limitations such as “differences in anatomy” and “lack of repeatable training.”17

The Army’s Rascon School of Combat Medicine at Fort Campbell does not use animals in its training program.18 The Air Force’s Center for Sustainment of Trauma and Readiness Skills and the Navy Trauma Training Center also do not use animals in medical training for service members.19,20

After complaints from PETA and German physicians, German authorities have repeatedly denied attempts by the U.S. Army to include maiming and killing animals in its training programs. According to news sources, German state government officials concluded that the procedures would “violate host nation animal protection laws” because “effective alternatives to animals are available.”21-23 In 2012, an expert panel of surgeons convened by a German court determined that animal use for military training was not justifiable, prompting a U.S. contractor to withdraw a lawsuit challenging a denial of its application to mutilate and kill animals.24

In 2011, PETA successfully campaigned to get the Army to stop poisoning monkeys in chemical attack training exercises and instead use advanced human-like simulators.25 PETA is currently working with Canadian military officials to end similar training drills that use live pigs.26

Animal Use Ended in Six Areas of Military Medical Training

Over time, PETA has persuaded the Naval Medical Center San Diego,the Naval Medical Center Portsmouth, and the Madigan Healthcare System to stop forcing hard plastic tubes down cats’ and ferrets’ windpipes during pediatric intubation training, which can cause bleeding, swelling, pain, scarring, collapsed lungs, and even death.27-31 These facilities abandoned the animal laboratories in favor of humane simulation models, and all U.S. medical schools abandoned the practice as of 2016.32

In 2014, following an internal review regarding its use of animals in medical training, the Pentagon determined that “suitable simulation alternatives can replace the use of live animals” in six major medical educational areas—including in certain trauma and other surgical training courses and infant and pediatric life-support skills. The Pentagon also ordered all military branches “to fully transition to the use of simulations in these programs by no later than January 1, 2015.”33 Although it’s a groundbreaking reform, this policy continues to allow thousands of animals to be used and killed each year for combat trauma training and other military medical exercises.

Progress in Ending Animal Use in Military Trauma Training Drills

Congress passed the National Defense Authorization Act for Fiscal Year 2013, which contained a provision requiring the DOD for the first time ever to submit a report to Congress detailing a strategy and time frame for replacing animal use in military training drills with modern simulation and other humane methods.34 But what the DOD ultimately submitted was in defense of the use of animals, ignoring the demonstrated superiority of simulation methods and not providing a date by which it would stop using animals.

In 2017, the U.S. Coast Guard became the first branch of the military to suspend—and later end—the shooting, stabbing, and killing of animals in trauma training drills.35 The Coast Guard confirmed that the policy change went into effect after a PETA exposé prompted an official review by the agency.

The Defense Health Agency has reported that animal use in military trauma training is “outdated and cost-prohibitive”and “not anatomically accurate.”36,37 Bipartisan legislation, called the Battlefield Excellence through Superior Training (BEST) Practices Act (H.R. 1243/S. 498), has been introduced and, if enacted, would replace military trauma drills on animals with more effective human simulation models.38 This bill has garnered more than 100 bipartisan cosponsors in Congress, along with support from The New York Times editorial board as well as national medical and veterans organizations representing tens of thousands of physicians, doctors-in-training, and former service members.39

Please help support our troops, improve medical training, and prevent thousands of animals from being killed each year in cruel trauma exercises. Urge your congressional representatives to support the BEST Practices Act, which would end the military’s use of animals in trauma training and mandate that troops be given access to high-tech human-patient simulators.