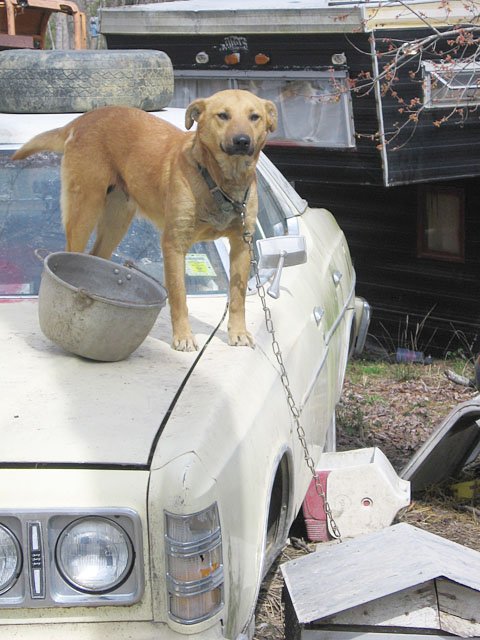 Tragic news stories and statistics make the connection between tethering or chaining and dog attacks clear. Virtually every dog who spends a significant amount of time tethered will suffer some temperament problems. But why is it that, according to British animal behaviorist Dr. Roger Mugford, “[d]ogs, just like human beings who get locked up for no reason, will get mean and bitter”?

The short answer, according to renowned animal behavior specialist Shelby Marlo, is that “dogs who are forced to live their lives at the end of a chain suffer from severe psychological, emotional, and behavioral effects.”

Dogs are highly social animals. In the wild, dogs ran around with each other as members of a “pack.” Over a period of many years, dogs were gradually domesticated and came to rely on humans not only for their care but also for companionship. Humans became—and still are—dogs’ “pack members.” Because domesticated dogs no longer have packs of other dogs to live with, they need to be members of our families.

According to the Washington Humane Society, “Chaining, by definition, keeps a dog in solitary confinement, continually thwarting [the animal’s] pack instinct to be with other animals or with [his or her] human ‘pack.'”

Many experts, including the following, agree:

Dogs are territorial animals. A chain or tether limits the animal’s space and makes the boundary of those few square feet of territory much more distinct.

In her book, Delise writes, “Because dogs are territorial animals, chaining them only serves to exacerbate space issues, as space is limited and more clearly defined.” Delise goes on to explain that chaining “increases the likelihood of a dangerous defensive response to a perceived encroachment on the dog’s territory or possessions (food or water bowls).”

As Dr. Michael Fox writes in his book Understanding Your Dog, approaching a chained dog will invariably result in a “show of aggression or territorial defense by barking and lunging.” He explains that a “dog kept on such a restricted personal territory” may develop a “territorial defense behavior … [that is] abnormally intense.”

‘Flight’ Is Not an Option

Dogs are “fight or flight” animals. When confronted with a threat, a dog’s psychology and physiology dictate that he or she will either flee from the danger (“flight”) or confront it (“fight”). Because tethered dogs have no opportunity to flee and escape from danger, they must resort to aggression and attacks.

Delise explains that “the natural fight or flight response afforded to most animals in most stressful situations is denied to a chained animal.” She writes, “The dog is cognizant of the fact that he can only retreat the length of the chain and will often opt to ‘stand his ground.’ Removing the option of flight for any animal will always increase the chance of a physical encounter (or fight response) to a perceived threat.”